The many threats facing Indonesia's endangered Irrawaddy dolphins
These icons of Kalimantan are on the brink of extinction due to industrial activity, boat traffic and plans to move the Indonesian capital to East Kalimantan province.
Read original story in Indonesian on Kompas

On April 1, 2018, a fishermen in Balikpapan, Indonesia, found a lifeless Irrawaddy dolphin washed up on the shore of Klandasan Beach. The dolphin, part of an endangered group of river dolphins found in South and Southeast Asia, was covered with oil, and its skin was peeling off.

The following evening, the fisherman, Ruslan, contacted Pokja Pesisir Balikpapan, a local community organisation, and one of the group’s secretaries, Husein, arrived to help pull the dolphin away from the shoreline to prevent it from drifting.

“The next morning, a burial was done in the designated location set by the corresponding officials,” Husein recalls of the incident.

Activists suspect the dolphin was killed by an oil spill. A day prior to its discovery, underwater pipes owned by Indonesia’s state-owned oil and gas company PT Pertamina broke, spilling around 400 barrels of oil into Balikpapan Bay. Pertamina has been extracting oil from the bottom of the bay for almost a century, piping it onto heavy tankers and transporting it for sale around the country.

Oil spills are not the only threat to the Irrawaddy dolphin’s habitat. These icons of East Kalimantan are on the brink of extinction due to several factors, including industry activity, boat traffic and plans to move the Indonesian capital to East Kalimantan province.

The Irrawaddy dolphin is the only freshwater dolphin in Indonesia covered by laws regarding biodiversity and ecosystem protection.

And while it shares the same family as the oceanic dolphin, it has particular uniquenesses.

According to Sunandar, the head of natural resource conservation in East Kalimantan, the Irrawaddy dolphin has a torpedo-like shape, a tall forehead and breathes through nostrils on the top of its head. 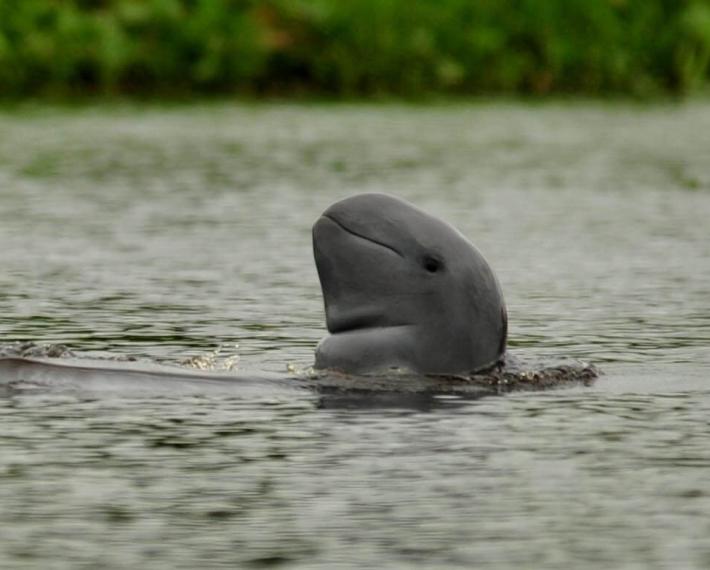 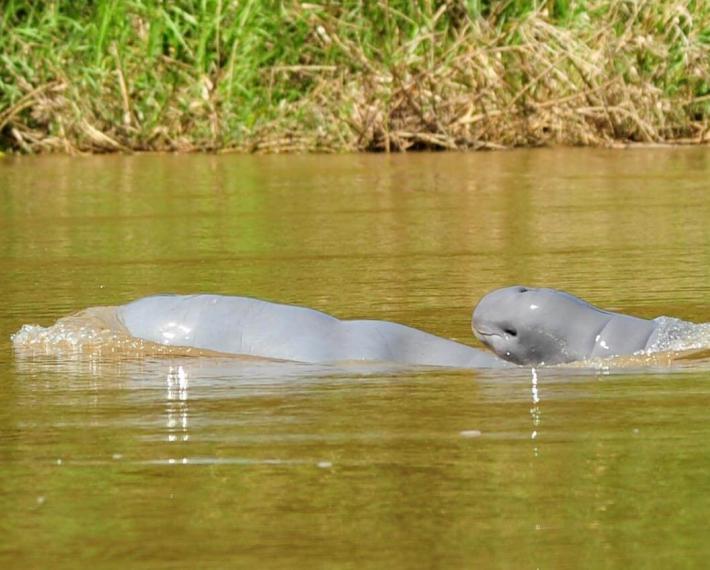 “The mouth line from around the eyes slopes downward, making the dolphin look like it is smiling,” Sunandar said during an interview in Samarinda last June.

The mammal also has a relatively large pectoral fin with a rounded tip, while the dorsal fin is a rather small triangular shape on the center of its back. Irrawaddy dolphins range in color from light grey to off-white. An adult can grow up to 2.75 meters long.

“Remember, Irrawaddy dolphins, dugong and dolphins are all different. Although initially they might all look the same,” said Sunandar.

The Irrawaddy dolphin’s unique appearance is one reason it’s so respected and honored in the region.

Across East Kalimantan statues and carvings of the Irrawaddy dolphin fill out public spaces.

In Samarinda, for instance, two statues decorate the area right in front of the governor’s office.

But two of the dolphins’ habitats -- the Balikpapan Bay and Mahakam River -- are threatened by increased industrial activity, including marine traffic and oil spills.

As a consequence, the number of Irrawaddy dolphins has fallen every year since 2000. In 2000, the International Union for Conservation of Nature, an international organization working to safeguard endangered species, has included the dolphin on its Red List of threatened species.

Irrawaddy dolphins in East Kalimantan inhabit two large waters: The Balikpapan Bay and Mahakam River. Scroll through the map below to see how their habitats and movements have changed over time.

Balikpapan Bay occupies an area that spans out over 160 square kilometers. Tobacco plants inhabit its coastline.

“Of the four species of marine mammals, the most prominent is the Irrawaddy dolphin, with a total population of 71 in 2015,” RASI researcher Danielle Kreb said, noting the most recent data available.

Starting in 2000-2001, however, Irrawaddy dolphins that inhabited the downstream section of the bay have migrated toward the river source due to threats to its habitat.

One of the biggest threats is ship traffic.

About 20 years ago, wood and coal companies started operating around Balikpapan Bay, increasing industrial activity and traffic of coal pontoons and oil tankers.

According to data from MarineTraffic, a global ship tracking company, more than 350,000 ships passed through the Balikpapan Bay area between June 2019 and July 2020. More than 35 percent of that traffic was from vessels categorized as tankers or cargo ships, whose lengths reach 200 meters.

“The intensity of the traffic in Balikpapan Bay is the biggest threat to the Irrawaddy dolphin,” said Hery Seputro, a coordinator for the Agency for Food, Agriculture and Fisheries in Klandasan, Balikpapan.

Indonesia’s new capital, which will cover an area of more than 250 hectares very close to Irrawaddy dolphin habitats, poses a new threat to the dolphin population in the Balikpapan Bay, experts say.

Threats on the Mahakam River

Between 1995 and June 2019, 103 Irrawaddy dolphins have been found dead in the river, with an average of four deaths recorded each year. The worst decline in the last 20 years was in 2018, when 11 dolphins were found dead. In 2019, the number of recorded deaths dropped to five.

Coal tanker traffic is one cause of the dolphin deaths, as well as contamination from heavy metals.

Water sample tests conducted by RASI between July 2017 and May 2018 found concentrations of Cadmium and Lead that exceed 23 times the quality standard due to waste pollution. This condition is considered dangerous for both dolphins and humans.

Industrial activities converting land for plantations and mining sites have also killed populations of fish, which the Irrawaddy dolphins feed on.

Currently, the biggest threat to the river’s dolphin population, however, are gill nets, a traditional fishing tool still used by fishermen in Mahakam waters.

"The highest number [of deaths], about 66 percent, were caught in rengge (gill nets),” said Kreb. “The rest, 10 percent, were hit by boats; 4 percent were suspected of being poisoned by waste or trapped in shallow areas and electrocuted by fishing gear, such as stun guns."

Data on Irrawaddy Dolphin Mortality in the Mahakam River

Hover or click on the circle to see the reason for death.

The East Kalimantan administration, meanwhile, says it is trying to restore the function of the river as a friendly habitat for dolphins.

"In principle, we will impose strict administrative and criminal sanctions if anyone is proven to have polluted," said the acting East Kalimantan regional secretary, M Sabani, who also acknowledged that coal barge traffic on the Mahakam River is a threat to dolphins and a cause for their movement upstream.

The oil spread across roughly 20,000 hectares of water in the bay, according to satellite data from LAPAN, Indonesia’s national space agency.

“One hundred and sixty-two fishermen were unable to set sail. [Fish] yields were unable to be consumed,” said Fathul Wiyashadi, the Coordinator of Kompak Teluk Balikpapan.

As for the marine habitat, the spill took the life of the Irrawaddy dolphin that the fisherman Ruslan found on the beach at the start of this story.

The oil spill in 2018 was the largest of the oil spills in the Balikpapan Bay this century, with three others taking place in 2004, 2009 and 2014, according to records kept by Kompak Teluk Balikpapan.

The same incident can occur again, Wiyashadi said, noting that oil mining at the bottom of the sea is still happening in Balikpapan Bay.

David Chuyu, coordinator of Balikpapan Bay Care Forum (FPTB), confirmed that oil mining activities, such as drilling, are allowable and still take place in the bay. Occasionally he said he also sees oil tankers throwing their waste oil into the water.

“If this becomes a frequent occurrence, the ... biodiversity in the bay would be threatened,” he said.

Idris, a fisherman, says fishing has become more difficult since 2002, when factories started building around the bay, polluting the waters through industrial activity.

“Back then [in 2002], there was no need to sail very far to look for fish. Right here, close to the coast, plenty could be caught,” said Idris, speaking from his home in Kariangau.

“There was much diesel fuel and oil waste thrown in the waters [after the factories came] that made the fish run away,” he explained.

Even the process of transporting coal ship to ship from a barge to a foreign ship is carried out in Balikpapan Bay, Chuyu said.

Combined, these activities put the bay’s environment at risk and are one reason activists continue to push the government to declare Balikpapan Bay a conservation area.

“We from the Balikpapan environment office are working with several other parties to protect the biodiversity of Balikpapan Bay,” he said during an interview last July.

One of his commitments is to ensure zero waste and zero sedimentation in the Kariangau Industrial Zone.

For now, however, Suryanto said, “every industrial activity has to ensure that its waste meets quality standards so that it is safe for disposal at the Balikpapan Bay.”

When asked about the environmental threat posed by the plan to relocate the nation’s capital to East Kalimantan, Suryanto said the current spatial plan for the new capital reserves 52% as green space and 48% for development.

"In principle, we will stick to the city planning," Suryanto said.

In Kutai Kartanegara, district head Edy Damansyah has issued a district decree designating 43,117.22 hectares of the Mahakam River as a Marine Protected Area for the Irrawaddy dolphin.

"This is part of the Kukar district administration’s effort to preserve the dolphin population that’s declining," said Damansyah.

The marine protected area spawns across the sub-districts of Kota Bangun, Muara Muntai, Muara Kaman and Muara Wis and its surrounds.

Sunandar, head of the East Kalimantan natural resources conservation agency, said he supports the Kukar administration’s steps to secure the waters for dolphins, calling it “a breath of fresh air for the Mahakam dolphin habitat.”

This story was produced through the Virtual Environmental Data Hackathon 2020 supported by the Indonesian Data Journalism Network, Internews' Earth Journalism Network and Resource Watch, a project of the World Resources Institute.