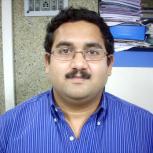 Aparajito has been in the field of professional journalism since 2004 and currently works as a science correspondent for Ganashakti Patrika, a mainstream Bengali newspaper published in Kolkata, Siliguri and Durgapur of West Bengal, India.

He is also a regular contributor to the science news program at All India Radio in Kolkata.

He has attended different government and non-government sponsored workshops and trainings and did anthropological studies in Meghalaya. His focus is on different health-related environmental issues. And as an EJN Fellow, he conducted surveys of communities in the Sundarbans, a giant mangrove forest area, to show the negative impact excessive salt in the drinking water was having on human health.

Aparajito has also worked with Paschimbanga Vighyan Mancha, the largest popular science organization in India, to highlight how a large real estate company that forcefully acquired land along the river banks of the Ganges at Barrackpore, violated a Green Tribunal order against riverbank encroachment. His reporting on that issue for Ganashakti drew attention and widespread resistance to the real estate company's action to the point that it abandoned the project.

Now he is trying to raise awareness about the distressed people of Sundarbans and their lack of access to basic health facilities.