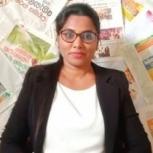 Kalavarshny Kanagaratnam is a Sri Lankan print and multimedia journalist with 16 years of experience in the field. She started her media career in 2005 as a trainee journalist at Sudaroli Newspaper. She has also worked as a news editor for Viluthu organization’s media magazine, ‘Irukkiram’. She has also worked in television, where she held position as a program producer for MTV Channel (Shakthi Tv), and later as a news manager for Athavan News until 2019.

By the end of 2019, she began work as an independent journalist and researcher. Currently, her articles are being published in a national newspaper, ‘Thinakaran’. She also delved into mobile journalism and with its gradual ascent in Sri Lanka, she has so far produced over 30 stories. Websites such as journo.lk, globetamil.com, virakesari.lk, citypost.lk and ceylonmail.lk publish her stories.
She produced a story about youth who live in the ‘upcountry’ regions, and who had gone missing during riots that occurred in 1990. This piece of story had never made it on any media platform even in the 90s. For the first time, she helped reveal this story to the Sri Lankan public. The project was carried out with support from Internews Sri Lanka.

Kalavarshny hails from a marginalized community. She was born in the village of Hapuwala (Napier) in Badulla district.  Many issues that would occur in the upcountry regions would be seen by mainstream media through a very low-key lens and this prompted her to write and produce more content and videos about the issues that persist in these parts of Sri Lanka.

Her most recent research which delved into topic of digital security won a silver medal. This project was also conducted through Internews Sri Lanka.
Kalavarshny completed her Diploma in Journalism at the University of Colombo and also holds an Executive Master’s in Mass Communication from Asia e University, which she completed in 2021. She is currently pursuing a Bachelor of Social Science degree from the Open University of Sri Lanka. 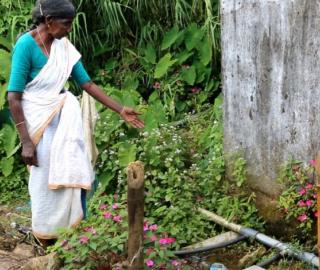