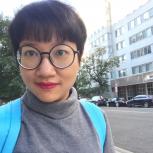 Pham Lan Phuong, with her pen name "Khai Don," started her career as a social feature journalist in Tuoi Tre Newspaper from 2009-2011. Her expertise focused on urban life and social issues in Ho Chi Minh City and the South of Vietnam.  At the time Tuoi Tre was one of the leading news outlets in Vietnam with circulation up to 300,000 for the printed version.

Khai Don joined Yahoo! Vietnam as an editor for online news, serving over 15 million unique users from 2011-2014. Her experience in catering to online readers gave her an opportunity to work for Thanh Nien Newspaper as an online social feature reporter.

From Thanh Nien, Khai Don developed her interest in The Mekong Delta and spent the next four years traveling to the region to write her social essay collections  "Mekong - phù sa phiêu bạt" [Mekong - The alluvium's pilgrimage]." The book was republished twice with over 10,000 copies.

After Thanh Nien, Khai Don joined The BBC Vietnamese Service, working in the Bangkok Bureau and covering the Vietnamese market. She also gained more knowledge and understanding about the Mekong Region beyond the Vietnam border.

Currently, Khai Don works as a freelance contributor for the Straits Times and BBC Vietnamese Service. She is pursuing an MFA in Creative Writing in non-fiction at San Jose State University to write a book about the Mekong in English