On the shores of the world’s largest bay live fishers and farmers hit by climate change every day.

With this in mind, and with generous support from the Climate Justice Resilience Fund, Internews’ Earth Journalism Network (EJN) started its Bay of Bengal Resiliency Reporting Initiative with three specific goals:

As a start, we asked a research firm to study the existing media landscape in the region and offer recommendations for achieving our objectives. Among its findings were the need for more training and capacity building for journalists, particularly at the district level, and the need to sensitize gatekeepers at media outlets of the importance of featuring reports on climate resilience.

The three-year initiative kicked off in October 2017 with media training workshops held in partnership with the World Bank’s South Asia Water Initiative (SAWI) in the Sundarbans area, in West Bengal (India) and in Bangladesh. The West Bengal workshop, held December 13-15, 2017, led to at least 15 news reports in local, national and international media outlets, many of them on the effects of a rising sea on people who live along the coast. The second workshop, in the Satkhira and Mongla areas of coastal Bangladesh in February 2018, produced a similar number of stories.

In selecting workshop participants through open applications, we ensured that the journalists were from both Bangladesh and India so that they could understand the similarities and differences in the lives of people who share the same landscape but are separated by an international border.

In partnership with the environmental news website The Third Pole, we held a workshop in Dhaka on September 29, 2018, specifically aimed at building the capacity of women and young journalists to report on the environment. At this workshop, we focused on the problems journalists face in reporting on such issues, especially climate change. From November 28 to30, 2018, we again partnered with The Third Pole and the Press Club Kolkata to hold a workshop that sensitized 41 journalists on the problems faced by coastal communities living around the mouths of the Hooghly, the main branch of the Ganges in India. 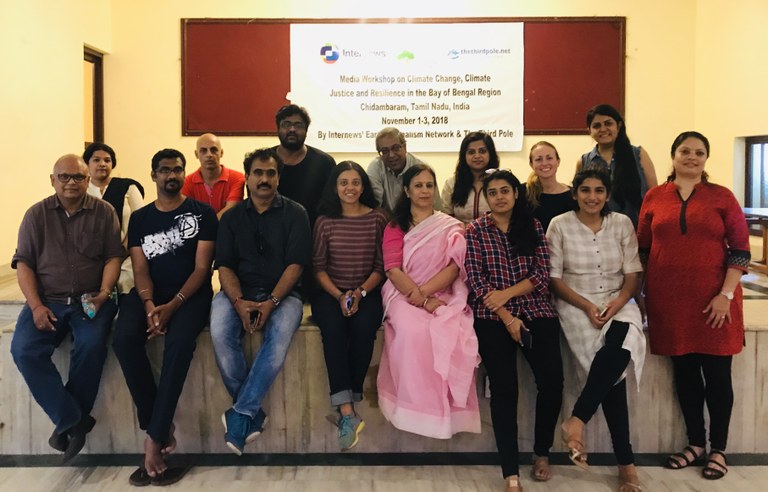 The Bay of Bengal Resilience Reporting project has also held three media-training workshops with its own funding – two in India (Chidambaram in Tamil Nadu and Visakhapatnam in Andhra Pradesh) and one in Bangladesh (in Bhola). In all of them, journalists got an opportunity to discuss climate change impacts – especially the effect of salt water intrusion along the coast – with experts, and then discuss with local communities how they are affected and what they are doing about it. Participants have already produced a number of reports from these opportunities, including this one by All India Radio reporter Monika Gulati about the important role mangroves play in protecting coastal communities.

When distributing our media grants, we emphasize the importance of working through local partners active in the Bay of Bengal among marginalized groups – especially women and indigenous communities. The partners are selected through a highly competitive process following an open call for applications. One of our grantees, VOICE Bangladesh, has started a community storytelling initiative with our funding and worked on developing an online collaborative learning platform for communities to improve their ability to share stories about coastal resilience. Based on inputs from a network of academics, professional institutions and civil society organizations, VOICE also developed content for a resource book on local ocean and climate literacy.

Young India, an NGO based in Odisha, started consultations with local journalists and community-based organizations on the best ways to improve the two-way flow of information and understanding on the impacts of climate change. Young India has also started holding media training workshops for journalists based in small towns and villages. It will provide small grants that will enable local journalists to work on reports that deal with climate justice and resilience.

Providing journalists with grants so they can report from the field is an important part of the Bay of Bengal project, and we are doing it in a big way, with 18 grants awarded in Year 1 (half were funded by the World Bank) and more soon to be announced for Year 2. In total, our activities in the first year resulted in 23 stories, which you can read on our project page.

We realize that one of the major impediments to reporting on climate change, climate justice and resilience is a lack of money – local media outlets often do not provide travel support or do not want to pay for reports on this subject. Grants that enable journalists to overcome these obstacles are popular and increase the quantity and quality of reporting significantly. As with the organizational grants, we make our selection in a transparent manner through a jury, following an open call for applications.

Our Year 1 grantees represent a mix of local and international media, and they have covered a broad range of issues, from what a severe water shortage in eastern India means for women responsible for this vital resource, to how the tourism industry and related businesses are coping with increasing water salinity and threats of natural disasters along the coast. They look at outward migration from fishing communities facing depleted seas and explore solutions, such as how farmers on low-lying islands are partnering with scientists to develop adaptive farming techniques. A story grantee in Bangladesh visited indigenous villages and documented the impact of climate change in these communities.

An associated activity is to provide opportunities to journalists from Bangladesh and India to cover the annual climate summit of the United Nations Framework Convention on Climate Change. With support from the project, as well as from the Stanley Foundation, three journalists covered the UN summit in 2017, and two covered the Global Climate Action Summit in San Francisco as well as the UN summit in Poland in 2018. 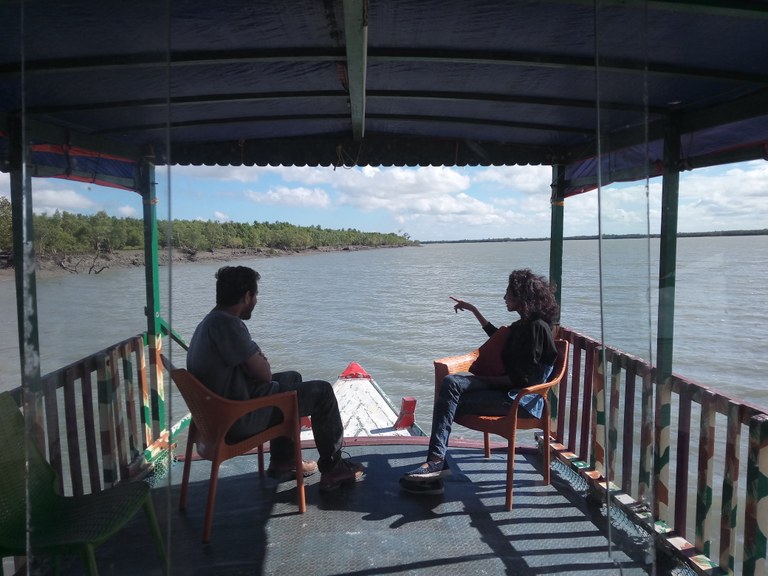 Reporters Kartik Chandramouli and Sahana Ghosh after wrapping up their reporting trip to the Indian Sundarbans / Credit: Courtesy of Sahana Ghosh

The project has had its challenges, the biggest being that journalists are often busy with other important assignments. This became a major obstacle during the Bangladesh elections in 2018 and is expected to arise again during the Indian elections in 2019. But we’ve learned to work around this, just as we have to work around the difficulty of conducting field reporting during the June-September monsoon rains in the region.

As some of our grantees have found, reporting on the impacts of climate change presents obstacles of its own, and we’re helping share personal stories from these journalists through a new blog feature. Mongabay India reporter Sahana Ghosh kicked off the series by sharing her experience navigating the difficult terrain of the Indian Sundarbans, the world’s largest mangrove forest.

Early on she and a colleague decided they wanted their narrative to center on the people living in this area, a network of “canals, tide creeks and mudflats.”

“We did not know then that in interviewing inhabitants of the Sundarbans islands, we would begin to unravel the meaning of resilience to climate extremes -- a meaning that is often camouflaged in phrases such as “battle for survival” and “struggle with climate uncertainties’,” Ghosh writes.

As our program continues into our second year, we have more exciting opportunities and stories to share. Stay tuned to our website and project page for updates.

Banner image: Participants in a November 2018 workshop in Chidambaram, India, talk with local fisherwomen about the importance of mangrove conservation / Credit: Sara Schonhardt

Joydeep Gupta is director of the Bay of Bengal Media Initiative and a lead trainer at workshops for environmental journalists from South and Southeast Asia.