More than a dozen media outlets in Bangladesh have reported on the latest round of journalists to receive story grants through the Earth Journalism Network’s Bay of Bengal Climate Resiliency Initiative. The attention has given the winning journalists, as well as EJN, strong visibility in the Bangladeshi media and highlighted the support we provide to grassroots journalists.

We recently awarded five grants to early and mid-career journalists in Bangladesh following an open call for story ideas on critical issues related to climate change that are driving notable responses. They were selected by a competitive judging process involving local and international judges. 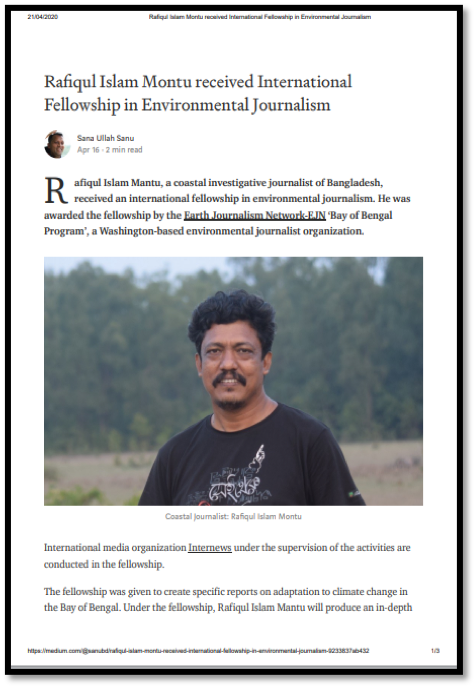 The aim of the grants is to encourage reporting on forward-looking, solution-oriented climate stories. The grantees -- a mix of audio, visual and print journalists -- are:

The Bay of Bengal project also provided story grants to four reporters in India to cover stories related to climate resilience around the coastal region. They are:

EJN’s Bay of Bengal project has been working in Bangladesh and India for the past two years to provide journalists with tools, resources and understanding to improve their environmental reporting. The project has also drawn the attention of local media through its different capacity-building activities, such as journalism training workshops and mentorships, which have enabled reporters to produce more human-interest stories and raise local voices to the national and global level.

The project has also tried to work with the leaders of the media organizations so that environmental, climate and resilience reporting gets promoted through their editorial policies.

"Bangladesh is one of the most climate-vulnerable countries in the world, and as environmental journalists, our fundamental role is to write about the vulnerabilities caused by climate change as well as disseminating the solutions to those to the general public and decisionmakers,” said Saleh Noman from Radio Today.

Noman is based in Chittagong, one of the coastal districts in Bangladesh most vulnerable to the impacts of climate change. He’ll use his grant to report on the need for social and economic integration among residents of small islands in the Bay of Bengal who’ve been displaced by sea-level rise and forced to migrate to big cities like Chittagong.

His main focus will be to bring out the challenges climate migrants face when they arrive in big cities. Often they are forced to change their professions or adopt negative coping mechanisms, such as pushing young daughters into marriage as a way to relieve a financial burden on a struggling household. They are also not included in social safety net programs, and frequently face stigma and discrimination.

"I feel so happy that I have finally been able to become a successful EJN Fellow, which I consider as a prestigious media award for any climate reporter,” he said.