New multimedia platform uses interactive maps, open data and journalism to raise awareness about one of the most important bioregions of South America.

An alliance of organizations from various countries has launched today (Monday 28 July) Carto Chaco, a new platform which will bring attention to the threats to the Chaco bioregion, which register the highest deforestation rate all over the world. The site CartoChaco.org uses richly designed maps powered by satellite data and journalistic stories to reveal the impacts of natural resources exploitation in this part of South America.

The Gran Chaco Americano, or Chaco plain, as it is known, comprises different ecosystems such as wetlands, dry forests and savannas. It extends through 106 million hectares, embracing 4 countries: Paraguay, Argentina, Bolivia and Brasil. The region also holds a large number of endemic species of plants and animals, besides playing a key role in the regulation of the Río de la Plata basin.

On its launch, CartoChaco has put together 5 interactive maps with multiple layers of information,

which allows analysis about the main threats to the region. According to estimates of the Terra-i system monitoring the International Centre for Tropical Agriculture (CIAT), from 2004 to 2013, the total loss of natural vegetation in the region sums about 4.2 million hectares.

The site has also aggregated more than 20 georeferenced news stories that investigate some of the trends behind the data. The combination of  satellite information and journalism was inspired by previous work done by InfoAmazonia, whose team in Brazil, has already helped to developed similar platforms in Africa and Asia. “We have called these monitoring tools geojournalism platforms, because we consider stories an important layer of information and when combined with geographical data, they generate great context”, says Gustavo Faleiros, editor of InfoAmazonia and part of the Carto Chaco team.

“Taken together, the above tools allow you to contextualize and update different actors, including scientists interested in the latest findings in your area of interest, journalists seeking to report their activities related to the environment stories, and the general public interested in what happens in this region”, explains researcher Alejandro Coca Castro, from CIAT.

Initially, the idea of the platform emerged from the union of a group of researchers from the Guyra Association, based in Paraguay, and Terra-i project, a multi-agency initiative led by CIAT, Colombia-based. Both organizations are dedicated to monitoring changes in natural vegetation, mostly forests, and they requested a group of journalists and developers of InfoAmazonia to help. Finally, the initiative was joined by a group of talented programmers from Simgia, a company dedicated to the construction of specialized IT solutions based in Asuncion, Paraguay's capital.

The initiative has been made possible with the  financial support from the Earth Journalism Network, a project of the media development NGO Internews, and CIAT (CGIAR program by their Forests, Trees and Agroforestry group - FTA).  Carto Chaco already has a multidisciplinary team of researchers, cartographers, developers and journalists. Our ambition is to integrate new people into this initiative and create a community of experts, media and citizens involved in the conservation of the Gran Chaco. 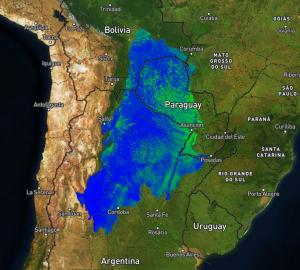