There was an air of uncertainty at COP24, the United Nations climate change summit where representatives of nearly 200 countries gathered to determine how they would deliver on commitments to curb global warming, as promised in the landmark 2015 Paris Agreement.

Given political changes swirling around the world, would delegates agree to rules for how to go about implementing the agreement to limit the emission of climate-changing greenhouses gases?

Would they heed the call of leading climate scientists who urged rapid and drastic action to keep global temperature rise below 1.5-degrees Celsius?

Nineteen journalists from 17 different countries and four trainers from Internews’ Earth Journalism Network travelled to Katowice, Poland, to find out -- and to report first-hand for their audiences back home – making it the largest media delegation at the COP.

They were participants of this year’s Climate Change Media Partnership (CCMP), a Fellowship program that selected this group of journalists from more than 300 applicants from around the world.

The CCMP, launched in 2007 to improve media coverage of climate change and the United Nations Framework Convention on Climate Change (UNFCCC)’s annual Conference of Parties (COP), particularly in developing countries, has been a partnership between Internews’ Earth Journalism Network and the Stanley Foundation for the past two years.

The program at this year’s COP began with a one-day orientation workshop on December 8th. EJN Executive Director James Fahn and Stanley Foundation Media Program Officer Devon Terrill kicked things off by talking about the ins and outs of the summit. They were followed by speakers from the UNFCCC; Climate Analytics, a non-profit climate science and policy institute; the Intergovernmental Panel on Climate Change, which produced the pre-COP report on the impact of a 1.5-degree global average temperature increase; and from Corinne Le Quere from the Global Carbon Project, a research organization that each year releases a status report on global emissions. 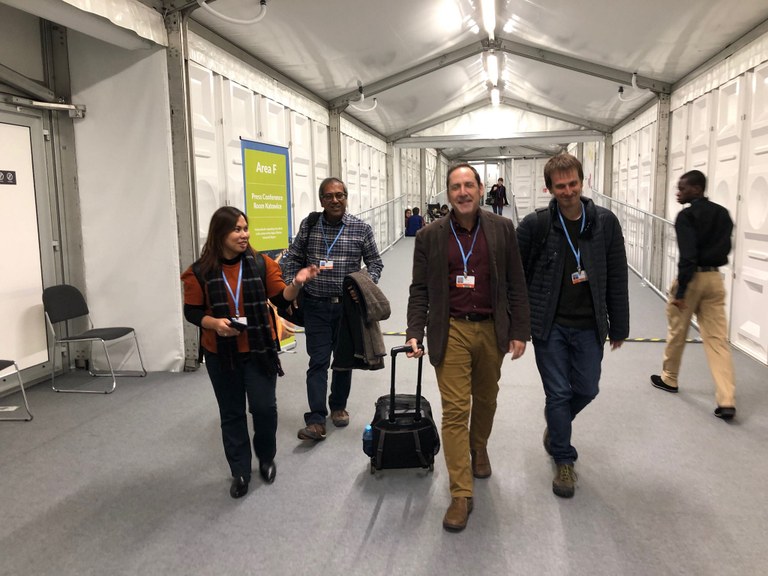 The CCMP’s four trainers – Imelda Abano, Joydeep Gupta, Fermin Koop and Kok Eng Amy Sim – all seasoned journalists, also shared tips with the Fellows on how to report news and events from the conference.

On the next day, the Fellows and trainers visited Euro-Centrum, a science and technology park in Katowice that tests energy-efficient and renewable energy technologies. There, Fellows met the director of the Euro-Centrum Innovation and Competence Centre, Patryk Białas, who is a clean-air and climate activist and, since November, a Katowice city councillor. Aside from introducing Euro-Centrum to the Fellows, Patryk provided insights on Poland’s coal problem and the political challenges it faces in the transition from coal to renewable energies.

For the next five days, the Fellows reported from Spodek, the spaceship-looking structure and its sprawling temporary extension that housed COP24. 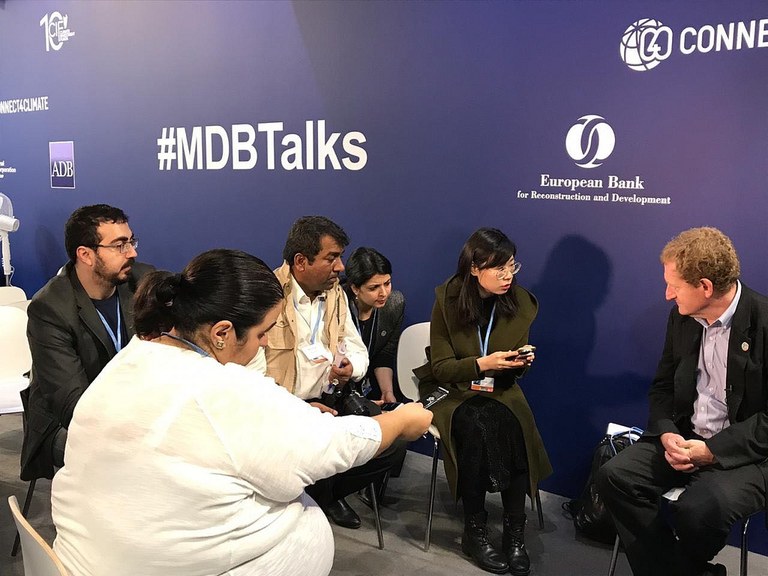 The goal of this year’s climate talks was to determine the so-called “rulebook” or implementation details for putting the 2015 Paris Agreement into practice in 2020.  And as ministers and their delegations from nearly 200 countries ironed out the knots in that text, the Fellows interviewed their respective delegations, reported their positions and covered the many side events. In addition, group interviews arranged by CCMP gave the Fellows access to climate experts from global organizations such as the Global Environment Facility, the Adaptation Fund, the World Bank and the World Health Organization.

So far, Fellows have produced and published over 60 stories, and more are expected in the coming weeks. They cover a range of topics from the twists and turns of the negotiations to broader looks at what the talks mean for future climate-change action. They also wrote about climate action and health, climate financing, low carbon initiatives, commitment from the sports and fashion sectors and more, focusing on the issues most relevant to their respective countries. 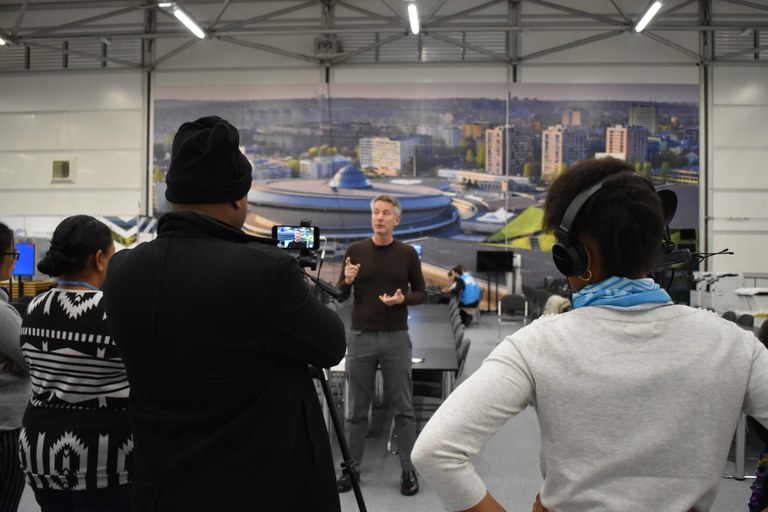 This year’s CCMP also included coverage of a pre-COP conference – the Global Climate Action Summit in San Francisco in September. Having that experience, Fellows said, was useful in helping them prepare for covering COP 24, which can be overwhelming. They also highlighted the value of the mentors and the pre-arranged interviews with experts at the COP.

“We could have not done better reporting or understood the issues without guidance from the mentors,” said Siphamandla Goge, a Fellow from South Africa. “My editors were so glad I was able to deliver from the COP.”

Goge said the mentors were particularly valuable in helping Fellows navigate the vast conference venue and understand the negotiations.

Le Minh Hung from Vietnam said that being a part of the CCMP group helped him overcome the many challenges he faced in Poland in terms of reporting and connecting with the Vietnam delegation. The knowledge and advice provided by the speakers during orientation and the hands-on guidance of the mentors were particularly useful, he said.

Minh also said he enjoyed the camaraderie among this year’s Fellows, who took advantage of the opportunity to share knowledge and network. Some even discussed collaborating with journalists from other countries to produce stories in the future. 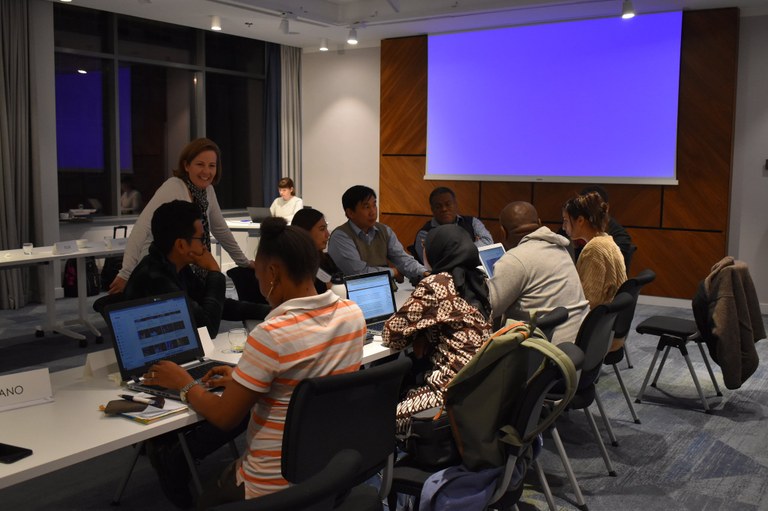 One CCMP Fellow from China, Zhou Chen, said “Most media outlets would focus their energy and resources on covering domestic affairs, so for the reporting of large global conferences like the COP, we really need the support of Fellowship programs like CCMP, and I cannot stress enough the significance.”

She said participating in CCMP and the interaction she had with journalists from other countries has increased her analytical capacity and expanded her horizons, enabling her to produce more informative and objective reports. “It was a highly rewarding experience.”

COP24 eventually concluded with an agreement on a Paris “rulebook”, so it was considered a qualified success, but one that left a number of crucial points unanswered.

Key questions on how countries will step up their targets to cut emissions and provide  financing will now be carried over to the next COP, to be held in Chile. As the climate crisis continues to escalate, journalists like the CCMP Fellows will play an increasingly important role in informing and educating the public as well as holding governments to account for their actions to avoid a global climate disaster.