Have you ever wondered if holding your breath when a cloud of black smoke billows out a truck’s tailpipe is a healthy idea?

It’s probably not a bad idea, but you might be doing less than you think: the most harmful pollutant to human health is not one that can be seen by the naked eye. Though fine particulate matter, or PM2.5, is invisible, its effects are evident across the world. PM2.5 is one of the greatest risk factors for premature death—it accounts for over 3.2 million deaths annually—and it, along with tobacco smoke and asbestos, is classified as a Group 1 pollutant by the World Health Organization, meaning that it is known to cause cancer.

Recognizing the health burden posed by these kinds of air pollutants and the importance of identifying those areas that pose greater risks, Internews’ Earth Journalism Network has worked with scientists and hardware developers to develop DustDuino. DustDuino is an air quality monitor that uses low-cost, open source technologies to measure concentrations of particulate matter in the air. It then uses WiFi and Xively to transmit and store the data in a user-friendly format to a computer or smartphone.

A study of the low-cost DustDuino found that the device yields results that are comparable to those produced by more expensive monitors when analyzing data at hourly intervals, indicating that the device could greatly contribute to data collection. While the device was designed for use at home or in the office, Clara Rondonuwu (the project manager of the Indonesian GeoJournalism site Ekuatorial.com) recently made some modifications to the prototype to equip the device for mobile use.

Clara's mobile DustDuino (cube in the bottom right) in her car.

Clara’s concept for the mobile DustDuino was inspired by the work presented by researcher Josh Apte at a sensor journalism training carried out by EJN in May 2014. Most traditional evaluations of air quality use a few high-quality sensors to model exposure over large areas.  While these methods accurately measure the overall air quality of a city, or ambient air, Apte felt that these measures didn’t give the full story – missing out on what types and levels of pollutants people actually breathe as they go about their daily activities in various parts of the city.

This UC Berkeley Lab post describes how Apte took to the streets of New Delhi to study the spatial patterns of air quality throughout the city and identify areas that are disproportionately affected by air pollutants. After attaching a video camera and a GPS to an auto-rickshaw, along with sensors that measured the levels of fine particulate matter (PM2.5), black carbon and ultrafine particles—three pollutants that are among the most dangerous to human health—Apte drove the vehicle through the streets and highways of Delhi for four consecutive months during the morning and evening rush hours.

Apte’s results highlighted an issue that most commuters had a feeling was true. The concentrations of all three pollutants were significantly higher on the roads than in the ambient air, indicating that air quality is disproportionately poor in these areas. Apte summarized his research by stating that “one’s exposure during a daily commute by auto-rickshaw in Delhi is as least as large as full-day exposures experienced by urban residents of many high income countries.”

Mobile DustDuino monitors—when combined with other tools like video and GPS—may be used to identify micro-environments in which pollutant levels are disproportionately high. While one sensor alone doesn’t necessarily create a large enough dataset to give actionable results, once potential hotspots are identified, a greater number of static sensors can be used to monitor the air quality in the targeted area.

From Office Desktop to Car Dashboard: Configuring a mobile DustDuino

Clara’s conversion of the low-cost DustDuino from a static to a mobile monitor required three steps and allows DustDuino to broadcast data wherever a cellular mobile network is available. The first step was to create a mobile hotspot, by using a smart phone or tablet which has this capability or purchasing mobile WiFi. Second, the WiFi module within DustDuino must be configured to connect to this mobile wireless network. Finally, a portable power source must be found for the sensor. That's all it takes to get this dust sensor on the road.

This Public Lab post by DustDuino designer Matt Schroyer has suggestions for mobile power sources as well as a more detailed explanation of each step. The mobile sensor's utility and potential applications are greatly increased without having to worry about staying within range of a WiFi connection and power source.

Clara experimented with mobile data collection while driving around in a car through Jakarta’s notoriously bad traffic but these modifications also make it easier to use DustDuino places away from a power outlet like parks, the countryside, or near industrial operations -- anywhere with a 3G cellular network and a potential air quality issue.  If you plan on experimenting in a similar way, maps of 3G coverage can be seen found on the MobileWorldLive website. 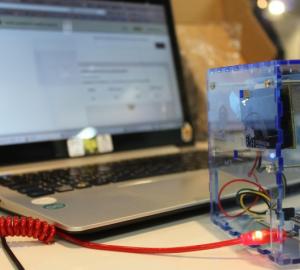