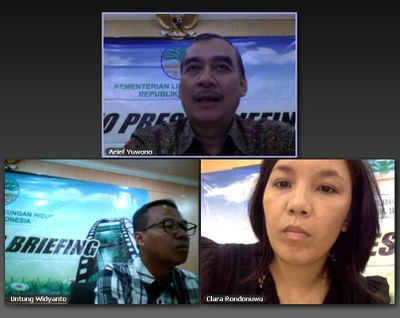 Partners of Internews’ Earth Journalism Network (EJN) in the Philippines, Argentina, Nigeria, India, Indonesia and Brazil will be leading video press briefings summarizing the latest Intergovernmental Panel on Climate Change (IPCC) findings leading up to the release of a major report.

The goal of the press briefings is to prepare journalists for the release of the IPCC’s Summary for Policymakers (also known as AR5, or the Fifth Assessment Report) so that they can produce stories relevant to their local communities. Each briefing will include a scientist, a journalist and a community service organization representative to provide an inclusive set of voices beneficial for journalists interested in the importance of the upcoming COP in Lima. (See also: Latin American Journalists Welcome to Apply for Fellowship to COP20 in Lima.)

The Fifth Assessment Report provides an up-to-date view of the current state of scientific knowledge relevant to climate change. It consists of three Working Group reports and a forthcoming Synthesis Report which integrates and synthesizes material for policymakers.

Issues such as agriculture and food security, water resources, human health, rising sea levels and ecosystems are addressed on a regional basis. Each country has its own unique set of challenges and each panel is focused on localizing the implications and impacts documented in the assessment report, which takes years to coalesce. The previous (fourth) assessment report was released in 2007 and helped the IPCC to win the Nobel Peace Prize.

EJN’s partners represent independent networks and organizations dedicated to producing better environmental coverage on a local, national or regional basis. Its global network is facilitating these briefings because the vast majority of journalists who report on climate change in the countries that face its biggest impacts will never have access to cover the decision makers who will decide their future.

More information about the IPPC AR5.