As part of our UN Ocean Project, Internews’ Earth Journalism Network awarded nine journalists from around the world fellowships to attend the UN Ocean Conference held in Lisbon, Portugal from 27 June – 1 July.

This Conference, only the second United Nations convening focused on the ocean, brought together representatives from national, regional and local governments; science and research communities; the private sector; and international and non-governmental organizations, who gathered to make progress towards UN Sustainable Development Goal (SDG) 14: Life Below Water.

Illegal fishing, overfishing, pollution, and ocean acidification caused by rising carbon dioxide levels are just some in a long line of threats to our ocean. On top of this, sea level rise and changing ocean currents also endanger coastal communities and livelihoods around the world.

Leaders were tasked with adopting an intergovernmental declaration on science-based and innovative areas of action, along with a list of voluntary commitments. And there’s a lot at stake: the discussions and commitments made at the UN Ocean Conference will impact over a third of the world’s population – approximately 2.3 billion people – who live within 100km of a coastline.

EJN's fellows were in attendance during the five-day summit in Lisbon – an opportunity for journalists reporting on ocean issues for their home audiences to engage directly with decision-makers and key stakeholders. Beyond just the opportunity to participate in the conference, fellows also benefitted from editorial, logistical and general support from the EJN team, helping them to maximize the impact of their reporting on the conference and going forward.  “Following two years of delay to this conference due to the Covid-19 pandemic, it was more important than ever to ensure that journalists are covering this important summit and promoting a wider discussion on ocean issues, which impact every person on the planet. EJN is proud to have been able to provide this opportunity to a group of dedicated and skilled environmental journalists, who we hope will go on to expand their reporting on these issues in the future,” said Charlie Debenham, Senior Programme Officer at EJN.

The Fellows who covered the negotiations were supported by EJN trainers Ricardo Garcia and Lucy Calderón Pineda. Pineda, a Guatemalan environmental and science journalist with more than 20 years of experience, is the Founder of EcocienciaGT and EJN's Latin America Mentor. Garcia has been an environment, climate, energy and data journalist for 30+ years. He also develops training programs for journalists with institutions such as EJN and the Thomson Reuters Foundation.

Upon arriving in Lisbon, the fellows participated in the Lisbon Ocean Media Workshop, a one-day event hosted by EJN and China Dialogue Trust. The workshop kicked off with an overview of SDG14, the UN Ocean Conference and its expected outputs, shared by Gemma Parkes of the World Economic Forum. The fellows then received a briefing on the upcoming week and refined their reporting plans with the EJN trainers.

Following a traditional Portuguese lunch, the afternoon featured expert panels on topics including sustainable fisheries, guidance on how to cover environmental conferences, reporting on China, and a multimedia, data and on-the-ground reporting workshop.

As part of a field trip organized by EJN the fellows had the opportunity to visit Livramento Fish Market in Setúbal, a traditional market that is an important source of employment for many local people. There, the fellows interviewed local fishers to learn how global ocean policies affect their livelihoods, and what the UN Ocean Conference means to them. In the afternoon the fellows enjoyed a boat trip with a meal of freshly caught sardines, an important fish for the Portuguese fishing industry.

Every morning the fellows attended a daily briefing where trainers discussed their plans for the day and dissected the events of the previous day. With the help of EJN, over the course of the week, fellows were able to meet and interact with high-level sources. Gaby Vizental, a fellow from Argentina and Fermin Koop, Latin America editor for China Dialogue, met with Chilean ocean policy expert, delegate, and representative from Mission Blue, Max Bello. Vizental interviewed him for her story recently published in Periodistas Ambientales.

The UN Ocean fellows also had the opportunity to meet with officials from the UN Development Programme, including Andrew Hudson, Head of Water and Ocean Governance, and Haoliang Xu, UN Assistant Secretary General and Head of UNDP’s Bureau for Policy and Programme Support.

Panel discussions and side events at the UN Ocean Conference

EJN’s Executive Director James Fahn accompanied the cohort to Portugal. Whilst there, Fahn was part of the Sparknews panel discussion hosted by their head of editorial Audrey Jacquet on ‘Ocean action: How can the media engage the general public?’ Also speaking was Jeremy Wilkes, Science and Climate Correspondent from Euronews. The discussion focussed on the strategies that journalists can use to engage larger audiences including how to engage people who don’t live near the Ocean, and the importance of the educational role of the media. Watch the recording here.

Fahn was also a panelist at a discussion entitled: ‘The Ocean Crisis: How To Take A Journalistic Dive?’ moderated by Audrey Jacquet, where he spoke about how journalists can improve their coverage of ocean issues and engage the public with clear messaging. He was joined by Julian Barbière, Head of Marine Policy, UNESCO and Daniele Moretti, SkyNews. Watch the recording here.

On June 30, Fahn moderated a panel at the launch event of the first Mediterranean Atlas of Trawling in Protected Areas. Fahn was joined by Dona Bertarelli, Co-President of the Bertarelli Foundation, Tony Long, CEO of Global Fishing Watch, and world-renowned oceanographer Sylvia Earle. The Med Sea Alliance’s Atlas is a new tool to help improve transparency around bottom trawling in protected areas of the Mediterranean Sea and to assist those tasked with enforcement.

EJN trainer Lucy Calderón Pineda moderated a panel with UN Ocean Conference Secretary-General Liu Zhenmin and Collen Vixen Kelapile, president of the UN Economic and Social Council. ‘From Lisbon to New York: A preview of the SDG 14 review at the High-level Political Forum’ where they discussed the critical role the ocean plays for the quality of life of all human beings.

Pineda also moderated an event called ‘Time is Running Out for Ocean Action: Identifying Key Threats and Upcoming Opportunities to Protect the Ocean and Planet’ where she was joined by Lisa Speer from the Natural Resources Defense Council, Sian Owen from the Deep Sea Conservation Coalition and Anna-Marie Laura from the Ocean Conservancy.

Valuable experiences gained by all

The fellowship provided journalists with a unique opportunity to learn not just from the EJN trainers, but from each other. Daniela Chiaretti, a fellow from Brazil remarked:

“It was interesting to watch Gabi working with video and talking to Tracy about biodiversity. I liked also what I’ve learned with Patricia and Kevin, my Brazilian colleagues. I’ve learned with them to use more easily the computer resources and mobiles.”

One of our fellows, who preferred to remain anonymous, said: “I can see a clear difference in my understanding of ocean policies now. Before, most of my knowledge was connected to the oil spills in the ocean… Now I have a better understanding of the many challenges in ocean policies, and I can report on them with much more confidence.”

Ricardo Garcia, EJN trainer based in the UK, noted that it can be overwhelming to cover UN conferences, but that fellows were more than equal to the challenge. “They are so complex, with so many things happening at the same time in a short period of time, that even seasoned reporters find it difficult,” he said. “Our fellows did remarkably well, with multiple stories published...from very different perspectives. I believe they came out of the conference with a clear view of present international negotiations on ocean issues.”

Lucy Calderón Pineda, EJN trainer from Guatemala, agreed that it was a “terrific experience” to lead the fellows as they covered on-ground events in Lisbon. “It was a two-way learning experience indeed. You learn from the fellows and hope that they can take something good from your advice...I would have loved to receive [this kind of mentorship] when attending conferences...during my early beginnings as journalist more than 20 years ago.”

The fellows reported on the conference proceedings as part of EJN’s UN Ocean Project, supported by the Calouste Gulbenkian Foundation (UK Branch).

Read a selection of their stories here. 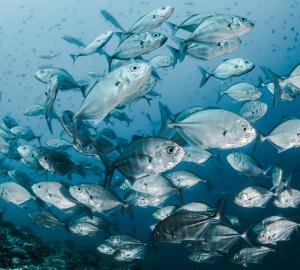