Philippines-based journalist Fatima Arkin, the recipient of a 2016 grant from Internews’ Earth Journalism Network, was recognized as the best young environmental journalist of the year at the Asian Environmental Journalism Awards (AEJA) held last month in Singapore.

Organized by the Singapore Environment Council, the award honors journalists and media organizations that report on the most critical issues facing the environment. The young environmental journalist category is open to reporters between the ages of 18 and 30. 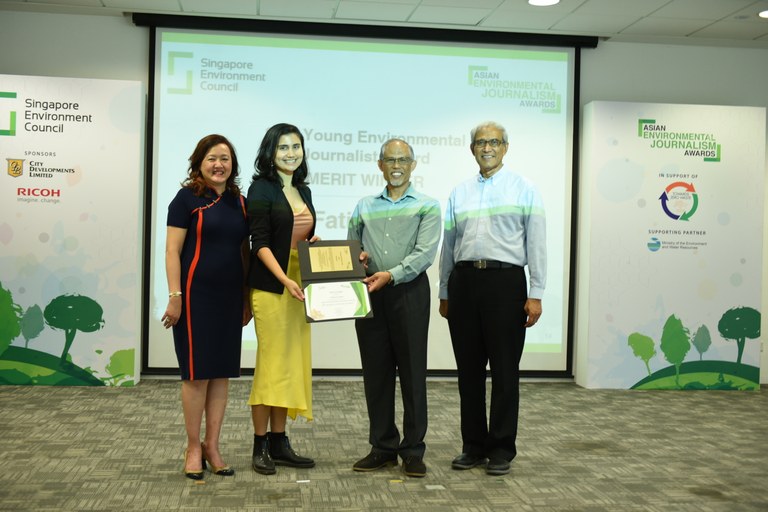 This year’s entries covered a broad spectrum – from sustainable farming efforts in Pakistan to the impacts of hail storms in Myanmar, according to an AEJA press release. Fifteen journalists and media outlets from across Asia were recognized.

Arkin, who is of Filipino and Canadian descent, applied for the award back in 2018, but the Singapore Environmental Council was delayed in choosing its winners for about a year, she said. Among the six stories she was required to submit was her EJN-supported piece. Published in the Southeast Asia Globe in April 2017, the story focused on how Myanmar’s new government was struggling to find the resources needed to help protect its citizens from the impacts of climate change.

“In a direct way, my EJN-supported story was part of the batch of articles that helped me win the award. And in a deeper way, the grant helped me grow as a young reporter,” Arkin said in an email message.

Arkin started her career at the Philippine Center for Investigative Journalism and now reports for various global publications, such as Science Magazine, Devex and SciDev.net with a focus on green finance and climate change.

She said EJN’s support allowed her to think more seriously about how to make climate change finance more interesting to a general audience and helped her look more thoughtfully and critically at the most pressing environmental issues facing the Asia-Pacific region.

“EJN's support helped me gain new perspective as an environmental reporter by giving me the resources to report on the ground in Myanmar,” Arkin said. “While I have reported on climate change throughout the Philippines and other parts of the world, Myanmar was a very different experience no doubt due in part to the fact that the country was closed off for so long."