The network, a project of Internews’ Inspires Consortium in collaboration with the Earth Journalism Network (EJN), with funding from USAID, will connect a group of professionals working to promote environmental, science, technology and innovation journalism in Ecuador, emphasizing quality, truthfulness, journalistic rigor and ethics in the treatment of these topics.

It is expected that the network will facilitate co-learning, training and capacity-building among its members, as well as support them to get better professional opportunities such as scholarships and grants.

Gabriela Verdozoto, an EJN grantee, said the creation of the Ecuadorian network of environmental journalists and science communicators is timely and necessary. “[Before this] there were no networks of this type in the country, which opens up a great opportunity to strengthen journalistic investigations with an environmental focus. In addition, nowadays, it is necessary, and the trend demands a network in journalism. The work of journalistic teams is gaining strength, collaboration is fundamental because they have greater exposure achieving a greater impact — environmental issues need this strength,” she said.

The launch event was also attended by Inspires’ partners GK (an investigative journalism platform in Ecuador) and the College of Communication and Contemporary Arts (COCOA) of Universidad San Francisco de Quito (USFQ).

On the morning of January 14, GK/USFQ/EJN project grantees participated in a full day of training at the Universidad San Francisco de Quito, led by GK's editorial team. A writing workshop, conducted by José María León, an editor at GK, covered story structure, setting a scene and rhythm and pacing of a story.

In the evening, Tania Orbe, a journalism professor at USFQ, gave a talk on transboundary journalism, pointing out why and how journalists from different countries should join forces to report on shared challenges and issues within the same region. Both Leon and Orbe’s talks helped guide environmental journalists still early in their careers.

In conjunction with GK and COCOA, Inspires provided story grants to seven journalism students and five professional journalists in 2021 to carry out investigative journalism projects on illegal, unreported and unregulated fishing (IUU fishing) in the Galapagos Islands.

This was a key activity to improve the quality and quantity of reporting on IUU fishing, which has grave impacts not only on the biodiversity of protected areas but also on the livelihoods of coastal communities, as indicated by the speakers at this webinar, organized by EJN in October 2021.

The fellowships provided an opportunity for participating students to learn firsthand about the topic, as they traveled to the Galapagos Islands to participate in training sessions with a variety of stakeholders, including veteran environmental journalists, officials from the Galapagos National Park and Marine Reserve, the Ministry of Environment, Water and Ecological Transition, the National Navy, and others.

In addition, Internews’ EJN provided reporting grants to six more professional journalists living in Ecuador. Late last year, the journalists were awarded grants to produce stories on IUU fishing in Galapagos and on the mainland coasts of Ecuador. The EJN team actively participated in the selection, mentoring and editing of these stories. Read the published stories here and here.

Franklin Teodoro Vega, one of EJN’s grantees and also one of the two network coordinators, said: “The network seems to me to be a good start, however, journalism in general and environmental journalism in particular, is going through complex times,” he said.

Vega hopes the network will help Ecuadorian journalists “maintain independence” and strengthen the ability to “question the official discourse of both the government and NGOs on environmental issues” in the country.

For Lucy Calderon, EJN story mentor, it is “very exciting to see the enthusiasm and proactive participation in the network,” which accomplishes one of the key goals of the project.

Pablo Arcuri, Program Manager at Internews’ LAC Programs, added that the lessons learned from the Inspires project have been positive. “[The project] generated good quality investigative stories that will surely have a significant impact on public opinion, helping to reveal the problem of IUU [fishing] in Galapagos and on the mainland coasts of Ecuador,” he said.

Contact [email protected] to request to join the network. Their next gathering is scheduled for April. 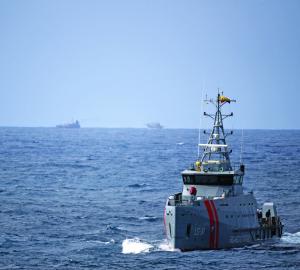