Award-winning journalists behind some of the most important environmental stories around the world discussed the challenges of localizing climate coverage during a recent Earth Journalism Network panel in San Francisco. The event on October 26th, entitled “Media, Climate, and Environment: Journalists from the Front Lines,” showcased their collective efforts to bring trusted information to vulnerable citizens and communities as reporters gathered for the 10th World Conference of Science Journalists. 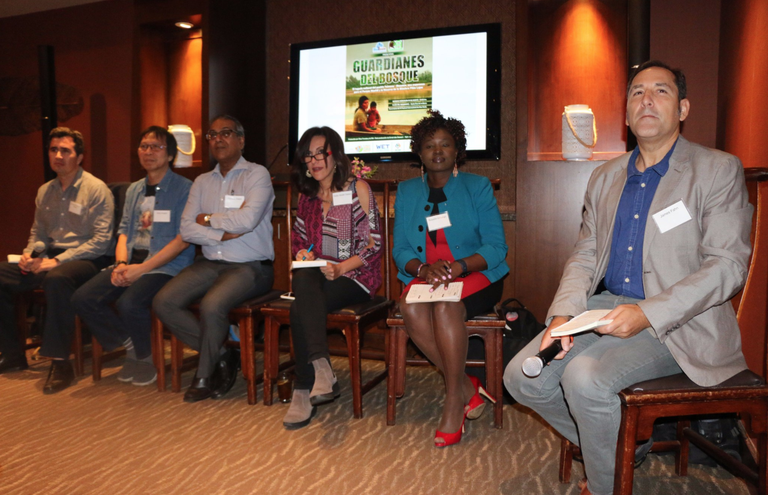 “Climate change and other environmental issues are fast becoming the biggest issues of the century,” said panelist Joydeep Gupta, who runs the Third Pole Project in India. It’s not only an important human story, he said, but reporters should view climate change as “the envelope that encompasses everything,” and link it to issues of health, economics, and even politics.

Once seen as a low-level assignment, if covered at all, some panelists said that environmental journalism is a growing field in their respective countries. “We now have more demand for media training workshops than ever before,” said Gupta who partners with EJN to lead training workshops across South Asia.

Rosalia Omungo, chairperson of the Kenya Environment and Science Journalists Association (KENSJA) agreed. “We’re raising a generation of environmental leaders and reporters,” she said. “This is a field that’s growing [in Kenya].” Unlike many journalists in the West, including the United States, Omungo added that she doesn’t have to convince her readers that climate change is real because they are seeing its real-world impacts every day.

One key obstacle to better coverage remains the lack of funding to send reporters to the field so they can report on impacts first-hand. “Desk research is not enough,” said Eduardo Berton, founder of Red Ambiental de Información (Bolivian Environmental Information Network). “You have to be there.” He credited efforts such as EJN’s story grant initiatives for giving vital opportunities to journalists, especially freelancers, to speak directly to those who are being affected by climate change.

In addition to Gupta, Omungo and Berton, the panel included Harry Surjadi, founder of the Society of Indonesian Environmental Journalists and Dalia Abdel Salam from Egypt, who serves as the Editor-in-Chief of Science Lelelm, the Arabic edition of Scientific American. EJN Director James Fahn moderated the discussion.

If you’re interested in supporting EJN’s mission to build the capacity of environmental journalists worldwide, please consider making a donation on our website.