A group of eight reporters and editors had the opportunity to participate in debates with prominent researchers and visit a mangrove restoration project close to the capital Paramaribo.

With up to 90 percent of Suriname’s population living along the coast, sea level rise represents a serious threat to the country’s economy and the livelihoods of its citizens. Guided by Sieuwnath Naipal, a professor at Anton de Kon University, participating journalists reported about an innovative project that is capturing sediment that washes ashore by high tides. The collected sediment is then used to form a substrate, or nutrient layer, that helps the regrowth of mangrove trees that can protect the coastline from future storm surges.

The group also traveled to a site located about 15 kilometers from Paramaribo. The district of Weg naar Zee (which literally means “Road to the Sea”) houses a population of 16,000 and an important Hindu temple. Unfortunately, it is also the site of the rapid coastal erosion; in 2015, several residents suffered extensive damage to their homes due to widespread flooding.

Leroy Troon, a multimedia reporter with Starnieuws--the largest media group in Suriname--has been covering the environment since the Weg naar Zee flooding. Following the EJN field trip, he had the chance to publish a follow-up piece: the first new line of mangrove trees that may protect from such events in the future are already growing.

According to Troon, such gatherings and trainings of local journalists are essential to keep environmental issues at the top of the news agenda. One of the main problems that environmental journalists face in Suriname, he says, is the lack of specialization. He hopes to use new methods of coverage raised during the training -- such as the use of interactive maps -- in future reports.

The training sessions were organized in partnership with the local office of Conservation International (CI) and included a workshop on increasing the use of data in environmental reporting. EJN trainer Gustavo Faleiros, who manages the GeoJournalism site InfoAmazonia, discussed the importance of using satellite imagery to communicate more effectively on the impacts of deforestation and other environmentally-sensitive activities. 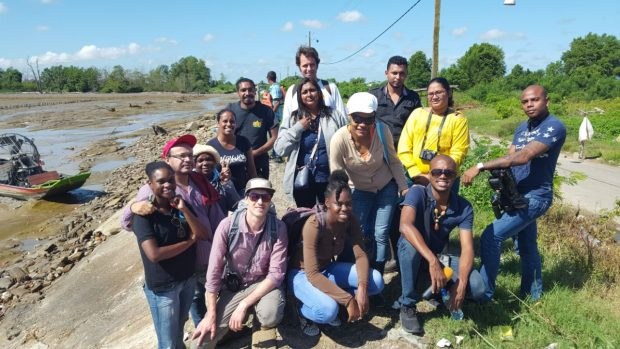 The journalists pose for a group shot during the field visit

Looking forward, EJN and CI share a common goal of encouraging transboundary dialogues between journalists from Suriname and their colleagues from Brazil, Guyana and French Guiana, so that they can inform the public of the importance of coastal conservation.

If successful, projects like Wag naar Zee can become key examples of adaptation along the edges of the Amazon River basin. In recent transnational meetings, governments of South America have started to create joint management initiatives to regulate coastal resources. But in order for this process to work, communication will be key.