The journalists, selected through an open application call, had the opportunity to learn from gender experts, legal experts, local communities and media trainers to sharpen their knowledge of water governance issues in the Mekong region. From 14-16 September, they participated in workshop-style sessions and went on a field trip to meet marginalized groups affected by mega-infrastructure projects along the Mekong River.

“In order to promote gender equality in management, a proportion of key leadership positions have been reserved for women.  However, in some cases, some of these women are promoted to key positions even though they are not yet ready for the job. Do you think that this approach discriminates against men and is it fair to those who are better qualified for these positions?”

The highlight of the workshop was the field trip, for which journalists travelled to Sangkhom district in Nongkhai province, about 2.5-hours away, to meet with a local women-led community. The residents there have been voicing their concerns about hydropower dams mushrooming along the Mekong River, and their devastating impact on biodiversity and livelihoods

‘We can’t say the exact amount of income loss. We just know that it is a lot since we hardly catch any fish. Our jars of fermented fishes are now empty, and we use it for gardening instead,” said Ormbun Thipsuna, the community leader.

Dams and projects to divert water for hydropower and irrigation lead to fluctuating water levels, causing a decline in fish stocks and the disappearance of birds, shared community members. Their riverbanks, fast eroding, are threatening farming activities along the river.

A seasoned fisherman who used to earn a decent income said he now uses his several freezers to store only bamboo shoots, no fishes.

Journalists also interviewed women who earn additional income from gold panning and farming along the riverbank – livelihoods that are increasingly uncertain as more dams are built.

In the afternoon, participants had the opportunity to travel by boat along the river. For many of them, it was their first time touching the cold, muddy Mekong water and to see the river up close.

On the last day, participants learned about ‘Legal Safety’ by an environmental lawyer, Amarin Saichan, who spoke about his work defending Indigenous groups, civil society organizations and environmental journalists. In one instance, he recounted a Thai journalist from ThaiPBS was sued by a gold mining company after reporting on youth activities against mining in Loei province.

Saichan also shared tips and techniques on how to minimize the risk of inviting legal charges from authoritarian governments and the private sector.

The workshop concluded with a session on ‘Transboundary water governance and future directions’ led by two women journalists, Lulu Ning Hui and Wang Yan, reporting on the Chinese perspective. Participants appreciated this insightful session as they rarely heard from journalists covering pressing environmental issues in China.

Nicha Wachpanich, a young journalist, pointed out that reporting on environmental issues is “mostly related to the investigation of development projects and their impacts. Reporters tend to talk about the affected groups as a single entity,” she said.

Participating in the workshop made her realize that impacts affect various genders differently. “With different experiences and perspectives, people might have surprising opinions and solutions to environmental problems. I learned from the workshop to discover stories in a new, refreshing way. I believe environmental reporting has to move forward.”

Juthamas Sukitjanont, project officer was pleased to see a high level of engagement among workshop participants. “Journalists shared their experiences freely,” she observed. “This was a safe space for them to learn from speakers and peers and to network for future collaboration.”

Workshop participants were also awarded story grants to report on water governance issues through a gender lens – an opportunity to put what they learned into practice. After they gained a deeper understanding of gender and social inclusion from experts and field visits, they brainstormed and revised their reporting plans.

Paritta Wangkiat, editor of Mekong Eye and mentor for the project, added: “Most participants enthusiastically discussed stories and case studies relating to gender and marginalized groups in their countries. This is a promising sign for the region’s media industry, which must become more inclusive in the context of increasing polarization and inequality.”

Through their upcoming stories, this project seeks to raises public awareness about the importance of inclusive water governance policies that would safeguard the interests of women and marginalized communities who depend on the Mekong River for their livelihoods.

Read more about the project here and look out for grantees’ stories on the EJN website. 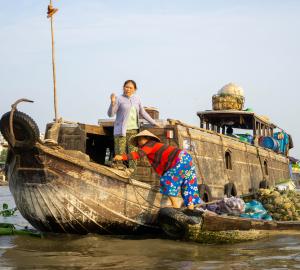