As part of EJN's first wholly remote fellowship opportunity, 10 fellows from across the African continent spent two weeks virtually reporting on the events of the fifteenth session of the Conference of the Parties (COP15) of the United Nations Convention to Combat Desertification (UNCCD), in Abidjan, Côte d’Ivoire.

The UNCCD COP15 is a key gathering to review progress made to control and reverse further loss of productive land from desertification, land degradation and drought. The theme for this year’s event — ‘Land. Life. Legacy: From scarcity to prosperity' — was a call to action to ensure land, the lifeline on this planet, continues to benefit present and future generations. Representatives from national, regional and local governments; science and research communities; the private sector; international and non-governmental organizations; and all forms of media addressed these issues during the two-week event, which ran from May 8-20.

The fellows covered the conference remotely, bringing the latest news from the negotiations in Abidjan to their audiences and ensuring that coverage of the COP represents all voices, especially those from marginalized communities most affected by drought and desertification.

They were supported by EJN trainers David Akana and Michael Simire, two seasoned journalists with over 40 years of journalism experience between them, who were on the ground in Abidjan reviewing stories, connecting journalists with interviewees and hosting daily briefings on key topics.

"Journalists covering the COP should not only prioritize issues that are germane to their countries, but localize global topics, ideas and reports they may encounter in the course of the coverage,” Simire said, giving advice for journalists looking to cover this topic.

“They should also give relevance to gender and youth engagements in addressing desertification and land restoration challenges,” he added.

Simire and Akana hosted regular briefings for journalists that were open to the public, in collaboration with the UNCCD. These briefings featured important guest speakers on a wide variety of topics and allowed journalists reporting on the negotiations to ask questions.

Dr. Barger, co-chair of the UNCCD Science-Policy Interface, joined the briefing to discuss what the science-policy interface means and how we can build resilience within communities facing desertification. She highlighted the important work of community-led land conservation and the critical role journalists play.

“I want to thank you all for the work that you’re doing, that you’re here today and that you’re listening to us have this conversation, because I do think that there is an incredible amount of work and important work that you are all doing as journalists,” Barger said during the briefing.

Fellows published more than 20 stories during the conference, with additional coverage expected in the coming months. Keep reading for a small sample of the work they produced, with the full list of stories available on our website.

In Kenya, fellow Chemtai Kirui traveled to communities threatened by desertification, drought and land use problems to broadcast their stories as delegates discussed solutions in Abidjan. In a piece she wrote for Kass Media Group’s website, she toured a farm in the western part of the country to understand the effects of drought on the community and how local officials are responding. She also released several TV pieces for Kass, including a recap of the first day, an interview with the CEO of the Conservation Alliance Kenya about the importance of the negotiations and an in-depth wrap-up piece at the end of the conference.

“The fellowship has provided valuable guidance by assigning me supportive and experienced trainers, who have guided me as a first-time virtual reporter to be able to report smoothly on the summit,” Kirui shared. “The daily discussion forum with speakers and the constant updated resources has helped me tremendously with my reporting.”

Fellow Paul Omorogbe in Nigeria reported several stories for the Nigerian Tribune, including coverage of the Drought in Numbers report released at the COP that stated more than 2.3 billion people face extreme water stress. He also covered the challenges faced by the Great Green Wall Initiative despite major success and highlighted the importance of women’s land rights in preventing desertification.

In Liberia, fellow Evelyn Kpadeh Seagbeh reported on the importance of COP negotiations on her country, whose forests account for half of the remaining rainforest in West Africa and cover more than 60% of the land area in the country. Her in-depth explainer piece on the purpose of the COP aimed to introduce her audience to the issue and provide clarity on the high-level negotiations.

“We are pleased to have been able to support these skilled African journalists in a virtual fellowship,” said Charlie Debenham, EJN’s UNCCD Project Coordinator. “African nations are amongst the most heavily impacted by the issues of drought and desertification, making it critically important that these topics are covered in African national and regional media.”

This project was supported by the Robert Bosch Stiftung. Learn more and read fellows' stories on the EJN website. 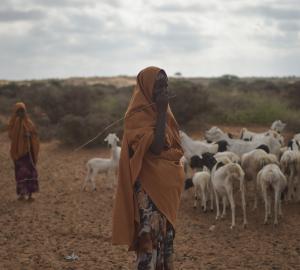