Eleven journalists from nine countries of Africa participated in a five-day training program in Lusaka, Zambia, promoted by Internews' Earth Journalism Network in partnership with the African Development Bank. The training sessions, held from May 22-25, deepened understanding of the issues Africa faces in providing universal access to electricity and combating the effects of climate change. The program also received support from the Global Environment Facility (GEF) and the Climate Investment Funds (CIF).

Group shot of participating journalists at the training in Lusaka, Zambia

During the training, reporters took part in workshops on identifying priority issues and using open data and visualization tools for effective reporting on energy and climate change. They also sat in on a roundtable with experts on climate finance and a panel on challenges African countries face in balancing their urgent development needs with commitments made under the global climate change treaty and UN Sustainable Development Goals.

Selection for the training was competitive: applicants were judged on their knowledge of climate change, prior reporting experience, media affiliation and country base. The eleven finalists were selected from a total of 144 applicants. The training program was led by EJN’s manager, Gustavo Faleiros, and Michael Simire, Editor-in-Chief of Environews Nigeria.

Maureen Odiwuor, a 30-year-old fellow from the Kenyan newspaper The Standard, is one such reporter dedicated to the climate change beat. She says she applied to the training to improve her knowledge of adaptation issues and the impacts of extreme events in Africa. “The training helped to enhance my capabilities to cover climate change." she said. "I have been thinking on doing a master on the subject and I feel this program was a step on the way to accomplish this desire." 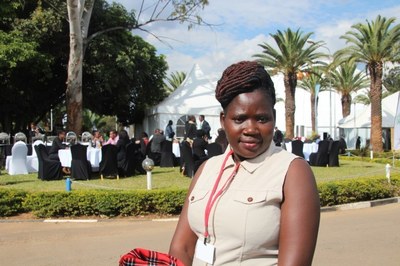 Kenyan journalist Maureen Odiwuor, one of the fellows of the EJN - AfDB training program in Zambia. (Photo Sonia Borrini)

During a opening session exclusive to the group, the AfdB Director for Energy and Climate, Alex Rugamba, explained the challenges behind the goal of achieving universal access to energy by 2025 in Africa, the so called “New Deal on Energy for Africa”, recently approved by the bank's board. “This year’s meetings are particularly significant for us, and will serve as a game-changer in the way we do business in Africa.” he said. “The Bank has a strong commitment to the value of communications – for transparency, education, knowledge sharing.”

Besides the exclusive workshops organized by our program, the journalists attended the AfDB Annual meetings where they had access to high-level events with African heads of state and thought-leaders, In an interview with Naoko Ishii, GEF CEO, they heard that African countries must be supported to ensure that their Nationally Determined Contributions (NDCs) to constrain emissions under the climate change convention remain in line with their development goals, and she urged the press to help keep this effort accountable.

”It was a gathering of highly resourceful journalists, who seemed willing to learn. As a trainer, it was fun and educative working with them: guiding, making clarifications, encouraging and making suggestions. This is a group of journalists the EJN should keep a close contact with”, says trainer Michael Simire

Selected journalists for the program: