Growing up in Vietnam’s Long An province, Vo Thi Thuy Van’s fondest memories were of jumping in the Vam Co River and playing hide and seek along its banks.

As a young girl in Hiep Hoa village in the low-lying Mekong Delta, Van also enjoyed chasing her sister and two brothers around rice fields and hunting for mushrooms. Heading back to the river and casting their lines, the family also pulled in a daily catch of fish—a valuable source of inexpensive protein along with homegrown vegetables and rice harvested from their half hectare of land.

Sadly, seeking fresh water and fish is no longer child’s play. Van came to that realization in high school while watching a documentary about rural communities in Africa. “I saw how older people had to go a long way in search of clean water,” she said. “At that moment, I knew I had to help raise awareness in Vietnam about the environment by becoming a video journalist.”

Fast forward to Hiep Hoa, 2017: Van, 37, says her parents and other villagers can no longer safely use the river. Over time, industrial, household and agricultural waste discharged into the river has depleted fish stocks and polluted communal water. Decades ago, the river was the primary source of drinking water here. Today, those who can afford it buy their water in bottles.

In 2014, Van joined the USAID-supported Mekong Matters Journalism Network, a group of media professionals in the region who work together to report on environmental justice issues surrounding the Mekong River.

Following training through the network, Van produced a four-part series on the life of women living along the Mekong in Burma (Myanmar), Cambodia, Thailand and Vietnam. The series documented the challenges facing farmers and ecotourism businesses that rely on the river.

Her reports described the Mekong Delta as the “granary of Vietnam” as it provides nearly 90 percent of rice exports yearly for the world’s second largest rice exporting nation. But in April 2016, the delta suffered the greatest drought and salinity on record, devastating yields and fields like those of Van’s parents.

The Mekong River, a lifeline for the 60 million people who depend on it, is second only to the Amazon River in terms of fish biodiversity. Urban growth has brought significant challenges to the region, threatening farms and food security while endangering livelihoods and the biological life of the river running through it. 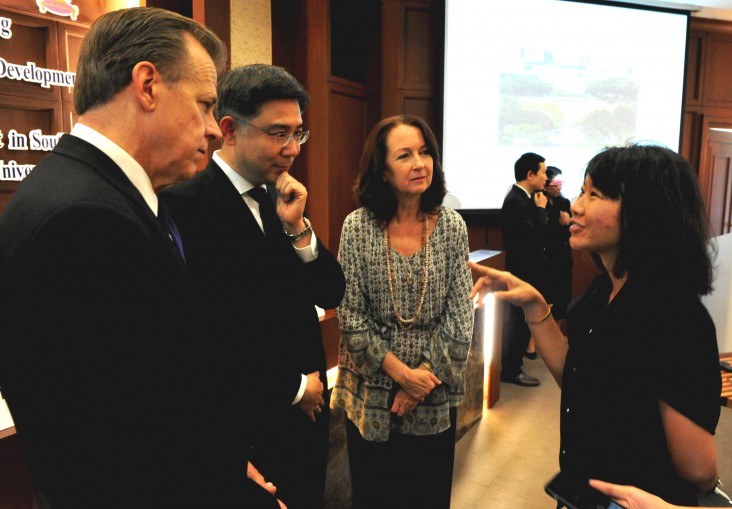 Check out The Mekong Eye, a weekly digest of news, commentary and resources on Mekong development projects, investment, safeguards and other development issues reaching over 5,000 development professionals, government officials, business leaders and journalists.

Before the Mekong Matters Journalism Network was formed, very few journalists reported on environmental issues. Nearly three years later, USAID has helped to connect and train over 240 journalists in the Lower Mekong; the network has grown to more than 400 members with hundreds more connected through local partner networks. Collectively, they have produced nearly 200 stories covering the environmental impacts of such factors as drought, coal plants and hydropower.

Van witnessed firsthand the challenges brought by urbanization and massive infrastructure projects over the last decade in the Mekong Delta. She is not alone. Paritta Wangkiat is a Thai journalist who started working with the network after spending four years as an environmental journalist with the Bangkok Post. She says the network helps her connect with other journalists from across the region, understanding that the most salient issues are transboundary in nature.

“The biggest challenge for journalists is that environmental issues are transboundary issues along the Mekong, like air pollution and wildlife trafficking,” she said.

The network provided a way for journalists from other countries to travel in the region and see firsthand the issues on the ground. After receiving a small grant, Wangkiat led a field trip to an industrial zone in Thailand, resulting in 21 stories and a government press conference promising to protect communities and the environment.

“The media plays a very important role in raising awareness on environmental issues that impact communities along the Mekong River,” said Beth Paige, director of the USAID Regional Development Mission for Asia. “There is an ever-increasing need to see realities on the ground affecting families, and give voice to people whose lives depend on a healthy flow of clean water.”

And for many like Van, the Mekong Matters Journalism Network can lead to even greater engagement. “I want to go back to the Mekong River Delta and work to improve the lives of my local people,” she said. “If livelihoods depend on fisheries, and the government isn’t planning for people, journalists need to raise the issue.”

Van is making big plans to help women in particular in the years ahead. She’s currently applying for scholarships to study social enterprises or environmental law. If this works out, she will conduct additional research into conditions for local farmers in Long An, possibly with an expert from nearby Can Tho University. Eventually, she would like to raise funds and start an organic vegetable farm and handicrafts workshop where women with disabilities can earn a respectable living.

“After doing the series about the Mekong River, it came to me naturally the idea to help the people in my area,” said Van. “I see there are lots of problems, but they don’t have any information about how they can get out of this situation.” With Van’s help, the path seems clear.