Fellows See That Global is Local at International Climate Summit

Fellows See That Global is Local at International Climate Summit

It was dubbed a climate event unlike any other: a chance for local government leaders and businesses to come together and commit to greater efforts to curb climate change. The host was California, a state known for its high-tech, progressive approach to reducing its environmental impact, and at the end of three-day Global Climate Action Summit, those in attendance had made more than 500 commitments to reduce their greenhouse gas emissions. 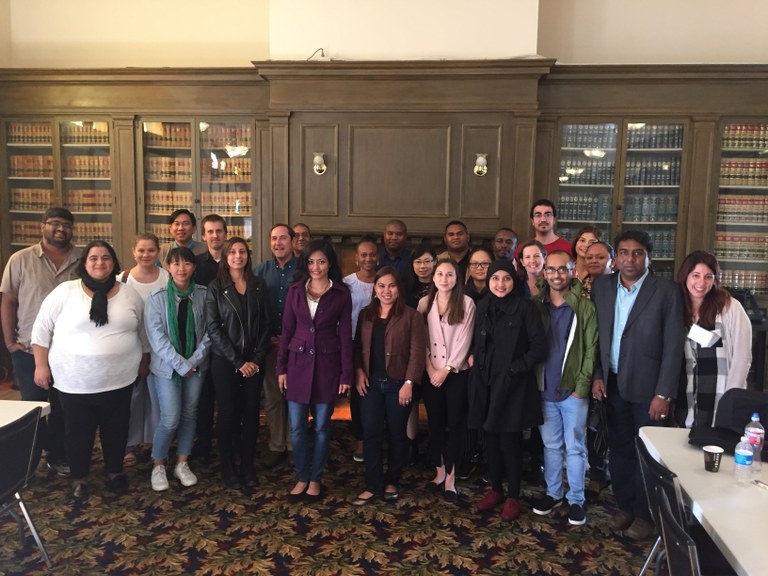 Twenty Fellows from around the world gathered in San Francisco for a workshop hosted by EJN and the Stanley Foundation ahead of the Global Climate Change Summit in September/ Credit: Sara Schonhardt

Internews’ Earth Journalism Network (EJN) and its partner the Stanley Foundation brought 20 journalists from the Climate Change Media Partnership to the GCAS, an opportunity to familiarize them with climate change issues and summit-based reporting ahead of the United Nations’ premier climate change conference, the 24th Conference of Parties to the UN Framework Convention on Climate Change, to be held in Poland in December.

The Fellows have so far produced more than three dozen stories related to the summit, many of them focused on how the various comments and commitments relate to their local contexts and audiences. Clean transportation and energy were highlights, as was a side event on health care and the environment and protests from activists demanding climate justice at GCAS’s official opening.

For much of the week, the buzz was around local action, with another side event focused on pledges by cities to reduce their climate-changing greenhouse gas emissions. It all came together at a time when the US government under President Donald Trump has relinquished its leadership on climate mitigation.

Here’s what some of our Fellows took away from the experience.

“A lot of the businesses are doing great work and that’s really important because we need the private sector to get engaged in innovating for climate action, in funding climate action,” said Bangladeshi journalist Sohara Meroze, who moderated a panel of global female leaders representing vulnerable nations in resisting climate change. “At the same time, it’s also important to have voices of the most marginalized and vulnerable communities.”

The women on the panel, she said, are speaking on behalf of those who won’t get to attend summits like the GCAS, in part because they’re out fighting against a changing climate.

Abhaya Raj Joshi from Nepal talked about attending a panel on climate and agriculture where he interviewed the head of the agriculture program at Microsoft. His takeaway from the conference, he said, was that sub-national governments have an important role to play in fighting climate change.

“In our part of the world we always look at the government … the central government to address problems,” Joshi said, referring to his home in South Asia. But local leaders attending the summit “have shown that even cities and provinces and states can do things that bring about positive changes.”

Paritta Wangkiat, a freelance journalist from Thailand, said she’s used to working with people most affected by climate change – farmers who have gone into debt because of crop failure or fishermen suffering from changing weather patterns.

Seeing officials cooperate in an effort to combat climate change would be good news to audiences back in Thailand, Wangkiat added. But what impressed her most was the cooperation between China and the US.

While international news talks a lot about the conflict between the two counties, “here in San Francisco I could see some local leaders from both countries really come together and talk about cutting carbon emissions in their home countries or even in their own cities,” she said. “It really opened up my perspective.”

Andrea Polanco from Belize works with TV station Channel 5. She says Belize and the Carribbean region have become increasingly vulnerable to extreme natural disasters and ocean pollution and warming.

Being in San Francisco gave her the opportunity to speak to leaders from across the world, including the Australian environment minister, and learn from their efforts to bring new innovation and knowledge to communities bearing the brunt of a changing climate.

“Being able to go home and share that with my country, a country that’s very strapped for resources, that doesn’t have a lot of technical expertise, is just a very good example of how global cooperation is needed in the fight against climate change," said Polanco.

Broadcast journalist Siphamandla Goge from Deben, South Africa, said the most informative part of the summit for him were the sessions on electric cars and seeing how fast the world is transitioning away from vehicles dependent on fossil fuels.

“In Africa, where I’m from, it’s a new phenomenon, but we are hopeful that it will gain momentum,” said Goge, who interviewed several mayors from cities in Africa, including Cape Town mayor Patricia de Lille.

While there were plenty of lessons to be had from the summit and related events, Goge said he also learned a lot just engaging with fellows from across the globe. It was a sentiment that other fellows echoed.

“In Greenland we don’t do so much news about climate change or environmental issues,” said Malu Pedersen, a radio reporter from Greenland. “So it’s like an eye opener for me to see how many people … are suffering.”

Pedersen said she learned how other journalists cover climate change at the summit and would like to see journalists in Greenland produce more personalized stories about how it’s impacting their own country.

That personal approach is something that has long appealed to Karthikeyan Hemalatha, a freelance reporter based in Bangalore, India.

One of the things he learned, he says, is that women farmers the world over confront similar challenges in the face of a changing climate. "Once I get back home I'm trying to see if I can draw a larger picture, connect these dots, between women in different countries and how they approach farming and what they think about climate change and their future."

This is the 11th year that the Climate Change Media Partnership (CCMP) has brought journalists to global events focused on addressing the complex issues surrounding global warming. Since 2007, more than 300 journalists – mostly from developing countries – have received Fellowships from the CCMP, producing thousands of stories for their home audiences in the process.