Inside a Nonprofit That Supports Environmental Journalists Around the World

Inside a Nonprofit That Supports Environmental Journalists Around the World 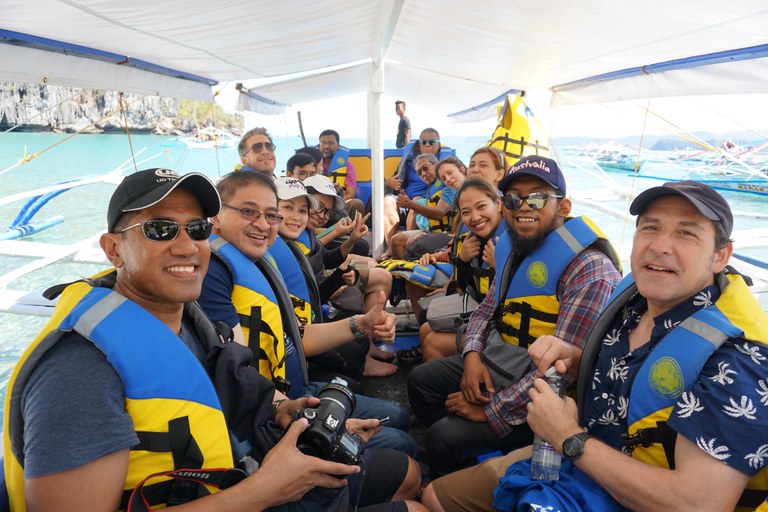 EJN staff and grantees during a recent training workshop in Palawan, The Philippines / Credit: Samiaji Bintang

Many countries, especially in the Global South, struggle to respond to environmental challenges like over-development, deforestation, poaching, pollution and climate change. When these threats are coupled with weak or corrupt government oversight, the news media—and robust, reliable local reporting—can be the only way to draw attention to what’s happening.

Among the organizations and funders who support nonprofit journalism, the Earth Journalism Network (EJN) plays a unique role by empowering journalists from developing countries to cover local environmental beats effectively. Along with climate change, the writers it supports work on many intersecting issues like fossil fuel extraction and its effects, biodiversity, wildlife trafficking and more.

Philanthropy upped its journalism game as print news declined and continues to invest in this area as both verbal and violent attacks on the media increase. The Omidyar Network, Democracy Fund and the Knight, MacArthur, International Women's Media and Ford foundations and others have all contributed substantially to causes like bolstering investigative reporting and local news, combating disinformation, and ensuring safety for reporters. Environmental journalism is one area that’s drawn rising support in recent years, and we’ve written before about the growth of outlets like Grist and InsideClimate News. EJN is different from these publications—operating as a network that provides grants, training and more—but it’s also expanded its reach as funders have grown more concerned about environmental threats.

What Does the Earth Journalism Network Do?

James Fahn, the executive director of EJN, is an award-winning veteran journalist who has covered the environment around the globe since the early 1990s. He tells us that environmental reporters “lack support, time and money. So what we want to do, first of all, is let them know there are many people out there who really value their work, and then, of course, support them as best we can, however we can.”

EJN launched in 2004 and has steadily increased its work training and funding of newsrooms and journalists in under-resourced areas, with more than 6,000 members working online, in print, and on the radio and TV. It gives grants, fellowships and awards, and creates websites, workshops and reference publications. Fahn says EJN estimates its 2018 spending on these initiatives at about $2.2 million, with 2019 expected to reach $3 million. Its support from funders has risen over time, and Fahn mentions the Marisla, Flora Family and Friends foundations and Kendeda Fund as consistent backers. (A full list is available online.) “We are now larger than we’ve ever been,” Fahn says.

EJN’s members have written thousands of stories from about 130 countries, and many are recognized for uncovering local scandals such as wildlife smuggling in Southeast Asia or illegally polluting factories in China. Recently, Fahn heard from a young journalist reporting on financing for climate adaptation in Myanmar who just won an award.

EJN was developed by the global news nonprofit Internews, which believes high-quality reporting and information can empower readers civically, an outlook that makes sense for environmental topics. Because we all—except for those few on the International Space Station—live on Earth, environmental stories are inherently relevant. Journalists serve as crucial conduits for scientists and other experts, bringing news to the public on topics like unsafe industry practices, breakthroughs in clean energy, or the harm or protection of wildlife and ecosystems. People from all branches of society can and often do translate what they learn into movement building, advocacy and policy change. Technological tools often play a crucial role in this information gathering and sharing process.

Good data can build powerful stories, and several of EJN’s projects implement tech to improve the availability and analysis of public data for environmental news and public empowerment.

“There's a massive amount of environmental data out there… and very little of that is actually used for communication or for explaining what is happening in the world around us,” Fahn says. EJN is currently partnering with Oxpeckers, an investigative environmental journalism unit in South Africa that specializes in data analysis and geo-mapping to expose eco-offenses and track criminals. Together, they created WildEye, a map that tracks illegal poaching activities as they move through Europe, plotting arrests, seizures, court cases and prosecutions.

When tools are in place and data are collected, journalists ask important questions and bring the findings to the public. For example, Fahn points out that there's a lot more data in WildEye from Western Europe than Eastern Europe—but is that due to a variance in crime, policing or reporting? All three? Or other factors? While wildlife trafficking coverage often focuses on Africa and Asia, EJN is looking at Europe, where countries serve as “both transit hubs and consumer markets.” In this case, EJN focuses not on an under-reported geographic area, but an unexamined sector of a global issue, and it is currently accepting grant proposals for stories investigating these topics.

A Focus on Professional Community and Safety

One of EJN’s priorities is creating programs that bring journalists together for networking, mentoring and to attend big events like climate conferences. This focus on convening, peer support and fostering community makes sense in an oft-beleaguered field. Fahn tells us this network-building is EJN’s “bread and butter.” It can make a big difference in the lives of environmental writers who often experience isolation in a content area that, while growing, is still often fragmented and underappreciated.

Along with keeping writers connected and professionally supported, another focus for Internews and EJN is reporter safety. The business of energy creation and the use of land, water and other resources are contentious issues that can be can be dangerous to cover. Along with a decline in news jobs, these reporters can face threats, harassment, legal persecution, digital security issues, physical and sexual assault and even murder, especially when freelancing in remote or unfamiliar areas. A total of 46 journalists were killed in 2017, along with 57 environmental activists. At least 10 journalists specifically covering the environment have been killed since 2010.

Internews and EJN run safety seminars and publish guides for writers. One example is a safety training guide for Philippine journalists that advises them on their rights and duties, covering crime and disasters, staying safe, and dealing with trauma and stress. It notes women face “twofold risks and threats when on assignment.” It also states, “Remember, no story is worth your life.”

Overall, while it often feels like the familiar two-steps-forward, one-step-back dance, Fahn says he has seen significant progress in the realm of environmental journalism during his career. Articles on climate change and other environmental topics once relegated to the science or outdoors sections can now be found on the front page. Reporting by EGN members boosts local and global understanding of these issues, and sometimes directly affects policies and decisions.

For example, a recent article by an EJN member covered a road that was slated to cut through the Amazon forest in Columbia that would bring significant long-term ecological impacts. “Partly thanks to his reporting, the road was suspended,” Fahn says. Along with the growth of the field as a whole, these kinds of impact stories give him hope. But as the Earth Journalism Network turns 15 in 2019, Fahn also sees plenty of room for funders to increase support for nonprofit news. “We really need philanthropy to step up and support media coverage of topics that might otherwise be overlooked.”

Fahn says that today, “We face a big problem with all the misinformation that's out there, and the blurring of the truth that occurs through social media and other means. I think, over time, people will come to value even more the importance of actual, accurate, credible, reliable journalism about the environment and other topics… whether they’ll really pay more for it, that’s really the question.” But Fahn remains “an optimist, by nature.”

This story was originally published in Inside Philanthropy, a website reporting on philanthropic foundations and donor organizations.