New Interactive Map Tracks Climate Change News in the US

New Interactive Map Tracks Climate Change News in the US

Internews’ Earth Journalism Network (EJN) announces the launch of Climate Commons, a new interactive data journalism and news mapping platform that aims to track the impacts of and responses to climate change on a local, regional, and national level across the United States.

By combining the most recently available information on climate change indicators – such as temperature, precipitation, and emissions – with the latest, geo-tagged stories on climate change in the US, Climate Commons serves as the first map of its kind in the country to visualize both the data and media coverage surrounding the causes, consequences, and responses to climate change. It is designed to enable Americans to gain a much better understanding of how climate change is affecting the places where they live today, how it is likely to affect them in the future, and what is (or isn’t) being done about it.

Though still in an early stage of development, the map should ultimately serve as a valuable tool for policymakers, academics, journalists, and the general public to foster informed dialogue about the often contentious issues surrounding global warming.

"This is an exciting project to bring climate change down to earth – making it easier for Americans to understand how climate change relates to the places they care about,” said Dr. Anthony Leiserowitz of the Yale Project on Climate Change Communication. Internews is planning to work with the Yale-based project to post perception data on the Climate Commons platform, using the ground-breaking survey results it collects on the attitudes and opinions of the American public toward climate change.

How to Use Climate Commons

Upon visiting Climate Commons, users are presented with a number data layers they can display across the map of the US, which currently provide information on temperature, precipitation, and carbon dioxide emissions, and will eventually include climate-related policies and regulations. The legend in the upper left-hand corner allows quick transition between these types of data, and between the annual averages and monthly anomalies (where applicable), providing comparison of the most recent trends with the norm. A continuously updated sidebar to the right displays teasers of the latest stories from around the world pertaining to global warming in a US context.  Users are encouraged to submit relevant news stories for inclusion on the site.

The map really comes to life, however, on close zoom. Not only is the map redrawn to display data trends more precisely when zoomed into a particular state or region, but the stories sidebar will also filter out all stories not within the immediately visible map frame. Finally, users can search for stories on a specific climate-related issue in one of two ways: using the filters just above the stories sidebar, or by searching for a specific term in the search bar in the upper right-hand corner.

As an example of the kinds of insights Climate Commons can reveal, users who zoom into the area around Amarillo, Texas will note that the region received four times the normal precipitation in February of this year. This was due to a huge blizzard that dumped as much snow on North Texas (19 inches in some places) as Chicago received all last winter. But users will also note that there are no news stories available on the map about this event, suggesting that the mainstream media has not tied it to climate change (although the AP did mention the likely relationship between the storm and climate change in national and regional stories.

Meanwhile, residents of Maine, for instance, can learn about a study which shows that climate change is likely to bring more rain than snow, and more storms that damage beaches. Climate Commons allows them to easily access such information, and how they can try and prevent or adapt to impacts, even if they don’t learn about it through regular media channels.

The Evolution of Climate Commons

Twitter users can also follow updates about the data journalism and news map by following @ClimateCommons, and can also follow @earthjournalism to learn about what’s going on with Internews’ global network of more than 4,500 journalists who cover environmental issues.

As part of its mission to empower journalists around the world to cover the environment comprehensively and innovatively, Climate Commons is one of several projects EJN has undertaken in the emerging field of GeoJournalism. InfoAmazonia, which hosts geo-located stories over richly designed maps about environmental indicators in the Amazon region, serves as both our flagship GeoJournalism project and the foundation for our work with Climate Commons.

The two platforms, along with future GeoJournalism projects, aim to build national and bioregional mapping platforms that allow communicators to simultaneously incorporate visual storytelling into their work and aggregate the work of multiple organizations onto a common platform.

Climate Commons has used the InfoAmazonia blueprint and tailored the project to meet the needs of  our audience and partners in the US. With the help of Axis Maps and support from Google Earth Outreach, EJN designed a Google Maps interface that utilizes a unique hexagonal display allowing the presentation of both continuous data such as temperature and precipitation and discrete events like fires or emissions.  All of the data can be accessed from the mapping platform itself, and comes from publicly available sources that include the National Oceanic and Atmospheric Administration (NOAA), the Environmental Protection Agency (EPA), and the U.S. Geological Survey (USGS).

Although the map is launched and ready for use, it is still a work in progress. In the coming weeks and months, Climate Commons will introduce new data layers, including one on climate-related policies and regulations that will deepen users’ understanding of the causes, impacts, and the scientific and political responses to climate change. Additionally, the map will soon be fitted with a sliding time scale that will allow users to not just visualize climate change in real time, but also track how patterns have shifted in recent years.

Ultimately, EJN aims to bring a diverse set of participants to the discussion by climate involving data and media networks, adding tools for the customizable distribution of maps and submission of stories to the sites, and creating a system whereby valuable citizen testimony can also be posted. Climate Commons aims to become a hub for climate change information, understanding and dialogue among wide-ranging stakeholders in the US. 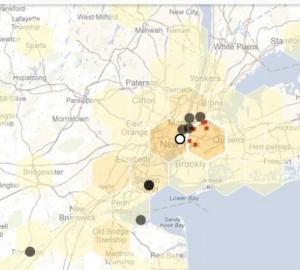