On the Heels of Historic WTO Deal, EJN’s Project on Global Impacts of Fisheries Subsidies Draws to a Close

On the Heels of Historic WTO Deal, EJN’s Project on Global Impacts of Fisheries Subsidies Draws to a Close

The global fishing industry is supported by around 22 billion dollars every year. These payments – for gear, fuel, operating costs, new construction and other capacity-enhancing improvements – directly and indirectly subsidize overfishing and illegal fishing, and for the last 20 years, the World Trade Organization has been attempting to negotiate a global deal to limit these fisheries subsidies and reduce overfishing.

This week, as the WTO announces that negotiators have finally agreed to a historic deal on fisheries subsidies, EJN’s years-long project to boost media coverage of this critical yet often underreported issue draws to a close.

With support from the Pew Charitable Trusts, EJN began this project in 2019 to train journalists how to report on their governments’ changing positions, the status of the negotiations and how the resulting deal might affect local communities in their country.

The first phase of the project focused on India, where $277 million in subsidies is provided annually. EJN hosted workshops, facilitated field trips and supported several journalists across India with story grants to cover fisheries issues in the country, including illegal fishing and subsidies.

With support from EJN, Indian journalists shone a spotlight on the unequal distribution of subsidies in India’s fisheries industry and investigated the causes behind rampant overfishing in the country.

In 2021, as the World Trade Organization geared up once again to begin negotiations on a global fisheries subsidies deal, EJN and Pew began phase 2 of the project. While still retaining a focus on India, phase 2 expanded the project’s work globally, to also focus on Japan, the Caribbean and coastal Africa (particularly western and southern Africa).

Grantees also covered the impacts of aquaculture and harbor infrastructure on biodiversity in India, initiatives to boost sustainable fishing led by community members in Kenya, overfishing in West African waters, the challenges faced by women fishers in the Philippines, unequal distribution of fisheries subsidies in Peru and more.

In Japan, we worked with a local partner, the Environmental Partnership Council, to support journalists covering a new law banning the import of non-certified fish, the impact of Chinese fisheries subsidies on the Japanese seafood market and recommendations from thinktanks for improving enforcement of illegal fishing.

In total, 18 journalists were awarded grants to report on illegal fishing, overfishing and fisheries subsidies issues in their home communities. Each of them was assigned a senior journalist as a mentor who assisted them in developing their story, and ultimately, they published more than 20 pieces of in-depth journalism. You can read their stories on our website.

Several journalists associated with this project went on to win recognition for their work: Garcia, in the Philippines, was included on the shortlist for the One World Media Awards for her story on rising tensions in the West Philippine Sea. The piece was part of Oceans Inc., a cross-border oceans reporting project by the Environmental Reporting Collective.

Mondal, in India, was also included on the longlist for the One World Media Awards in the New Voice category, which recognizes young journalists who have made a substantial contribution to international journalism. In addition, she received the Thomson Foundation’s Young Journalist Award 2021 in the environment category.

In the last year, EJN hosted six webinars related to fisheries subsidies globally and in the specific target regions, inviting a variety of stakeholders and expert speakers from the University of British Columbia’s Fisheries Economics Research Unit, International Institute for Sustainable Development, GEOMAR Helmhotz Centre for Ocean Research and more.

These webinars are now available on our YouTube channel as a playlist, along with additional fisheries webinars from other EJN projects. In total, the playlist contains 16 hours of content in 5 languages.

The project culminated in a new resource for journalists, drawing on expertise from webinars and industry experts. We developed an in-depth guide to equip journalists looking to report on illegal, unreported and unregulated (IUU) fishing with foundational knowledge on international fisheries infrastructure and regulations; scientific terminology and data; and the latest innovations and technology that could provide solutions for these problems. Along with this information, the tipsheet provides suggestions, story ideas, recommendations and resources for journalists to get started. The guide is available now on our website.

“While the WTO has reached an agreement on fisheries subsidies, it remains to be seen how fishing communities and industry will be impacted,” said EJN Program Associate Hannah Bernstein, project manager for the fisheries subsidies project. “The debates, data and potential solutions still require investigating, which is where journalists come in. We’re proud to have completed a successful project and look forward to following these journalists as they continue to scrutinize fisheries issues in the future.” 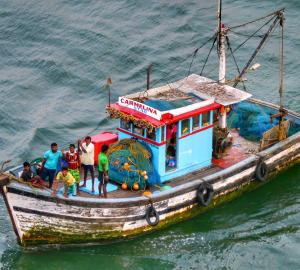