"There was drought so we had to share the little water brought a long distance from irrigation canals to the field. This delay in rice planting is resulting in a late harvest," explains Ratna Darai, 47, a farmer in Daraipadhera, Nepal during an interview with thethirdpole.net reporter Ramesh Bhushal. The effects were clear, an erratic monsoon means an uncertain harvest in a nation where agricultural production is not on pace with population growth.  Water insecurity is a major driver of conflict and uncertainly in the world's most populous continent.

In an effort to help understand and react to the rapid changes taking place in the Hindu Kush Himalaya region, also known as "Asia's water tower," Internews' Earth Journalism Network (EJN) and its partner The Third Pole are launching an open source geospatial database. Located at data.thethirdpole.net, this compendium of scientific data on water issues is sourced from leading organizations monitoring water in Asia.  Supported by the Skoll Global Threats Fund, the Third Pole Data Network is part of a growing cadre of open data sites focused on the region, including the recently launched ICIMOD Regional Database Initiative and WRI's Aqueduct.

"The most exciting thing about this site is that its publication represents a beginning rather than an end. The data is interesting when it has real world application and knowledge value," says Willie Shubert, EJN's Senior Coordinator and a leader of the project. "This website is a fundamental step toward the adoption of open data in one of the world most critical bioregions."

The Hindu Kush Himalaya mountain range is known as the "Third Pole" because it contains the world's largest store of ice outside the polar region. Glaciers that sit atop the watersheds provide irrigation, power and drinking water for over 1.3 billion people – nearly 20% of the world's population.

The region's river systems are also interrelated and cross numerous national boundaries. Many countries are already suffering serious water stress; planned infrastructure projects, including dams, are raising both regional and cross-border tensions and may have severe environmental impacts.

People in the Himalayan watersheds also face higher risks from flooding, water shortage and pollution. Future population growth, climatic variation and increasing demands on scarce water resources from agriculture and industry are increasing these risks. For instance, the situation facing farmer Ratna Darai is all too common: the shifting of temperatures and seasons means water often doesn't arrive when it used to, or in the expected quantities.

However, access to information in this region is segmented and constrained by licensing schemes in various countries. The accuracy of information is also frequently contested by different government agencies in different countries. Mitigating common water threats will demand high levels of cooperation and historic tensions serve as an impediment to effective action on what is clearly a major threat to the region's resilience.

Acting wisely in response to these threats requires broad access to credible information. data.thethirdpole's  simple, searchable catalog of datasets covers the Hindu Kush Himalaya region and so far includes over 125 of the most fundamentally important datasets about hydropower, glacier status, groundwater depletion, andnatural disaster that provide the context for many of stories produced by a network of journalists for thethirdpole.net.

"This project allows journalists to think more creatively and simplify information that is generated through complex science," says Project Manager Ramesh Bhushal. "It provides the freedom to visualize stories that are of great importance and make them readable and understandable by the public, to inform the public and policymakers for better decision making."

All data hosted on the site is available for download in multiple formats and sourced from a network of data providers. Partnership agreements have been signed with 10 organizations including regional centers like the International Center for Integrated Mountain Development (ICIMOD) and the International Water Management Institute (IWMI). Global organizations like International Rivers and the World Resources Institute (WRI) are also actively engaged in providing data to the public using data.thethirdpole.net. With data sharing agreements in place, EJN and thethirdpole.net fully expect this database to expand in size over time.

"We now have an open source database that enables any media house, journalist, think tank, university, government department or anyone else to prepare attractive maps of the Himalayan region on a subject of their choice with some very user-friendly software," says Joydeep Gupta, South Asia Director of thethirdpole.net. "And it's all free of cost. The next step is to let all these potential users know so that they start using this database. In return, we want the users to tell us how they have used this information. We'll then geo-tag those stories and reports on our maps, thus enriching the database all the time, and also enabling our partners to reach wider audiences."

"The sharing of information is an important step in resolving differences," adds EJN Executive Director James Fahn. "Our hope is that this data site, the future information products we're planning and the network of communicators, researchers and policy experts we're building can help the region overcome some of the many sustainability challenges that lie ahead." 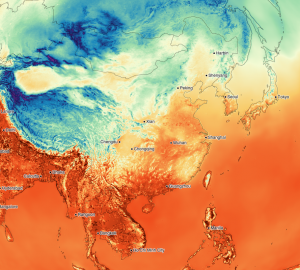