Efforts by the South African Science Journalists’ Association (SASJA) to upskill members and non-members alike about reporting on environment matters got off to a flying start. SASJA's first “Biodiversity Workshop for Journalists” was held on 18 May in Goudini, at the foothills of the fynbos-rich Dutoitskloof Mountains near Cape Town. 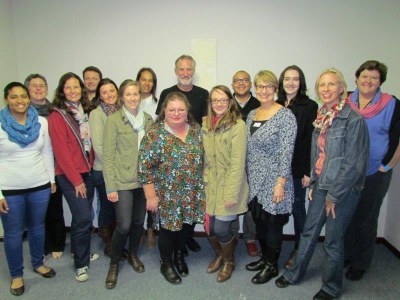 It was made possible through a Biodiversity Media Grant that SASJA received from Internews' Earth Journalism Network earlier in the year. The grant also allows for other workshops to be hosted elsewhere in the country later in the year.

“Such support is invaluable in helping voluntary organisations such as SASJA fulfil its mission to provide training to members,” says SASJA president Mandi Smallhorne, who was also one of the co-presenters of the workshop. She was ably assisted by John Yeld, who for more than 30 years was the award-winning environmental and science writer of the daily newspaper Cape Argus.

“Excited to learn from Cape Argus legend @johnyeld about science journalism” is what one of the bloggers attending tweeted early morning.

The workshop gave SASJA the opportunity to provide training to journalists on how to tackle issues relating to invasive species, and in particular their management and control. It among others attracted community newspaper reporters, freelancers, journalists working at agricultural publications, a blogger or two with a science background, and even a copy editor.

The workshop coincided with the 43rd annual Research Symposium on the Management of Biological Invasions, which was organised by the Centre of Excellence for Invasion Biology (CIB) at Stellenbosch University and the South African National Biodiversity Institute (SANBI). The CIB and SANBI also kindly lent support in helping to organise some of the logistics that went into the event.

Most of the invasive species experts that provided valuable background and story ideas to participants — on anything from fruit flies, invasive mussels to ladybirds and wasps — were also connected to the CIB, Stellenbosch University or SANBI. The morning session also attracted a few younger invasion biology scientists eager to learn more about how the media works, in an effort to communicate their own science better.

“It strategically and logistically worked well to host the workshop alongside a meeting of experts, because many of our speakers were readily to available and excited to share their knowledge to the media,” explains SASJA board member and workshop organiser Wiida Basson-Fourie of Stellenbosch University.

Workshop participants also had the opportunity to attend the opening session of the Invasive Species Management symposium. They heard first-hand from leading South African scientist Bob Scholes about the need for quality scientific assessments, such as is currently being conducted on a newsworthy topic such as fracking. They were also brought up to speed by Dr John Wilson of SANBI about progress being made with the drafting of South Africa’s invasive species report, which is due in October 2017.