The Mekong River basin is home to more than 300 million people and spans six countries – Cambodia, China, Laos, Myanmar, Thailand and Vietnam. China’s emergence as a global power with increasing influence and investments, including in the Mekong region, has heightened concerns about the environmental impacts that come with these investments and their related development.

To improve reporting and public understanding of China’s changing role in the region, EJN co-organized a media workshop in Thailand from Sept. 2-6. The other organizers were ChinaDialogue, The Third Pole and the Centre for Social Development Studies (CSDS) at Chulalongkorn University’s Faculty of Political Science in Thailand.

Nine journalists from countries surrounding the Mekong River participated in this five-day workshop. On the first day, the journalists learned about the Lancang-Mekong Cooperation (LMC), an intergovernmental organization aimed at tackling political and security issues and fostering more equitable development in the region. They also explored research and conservation efforts at the source of the Mekong River in the Tibetan plateau (the Mekong is known as the Lancang in China).

The workshop was followed by a public forum on Sept. 3 hosted by CSDC, where more than 90 participants spent the full day discussing important issues with experts in the region on the Lancang-Mekong Cooperation framework and other initiatives in Southeast Asia.

Panel discussions covered the geopolitical implications of the Belt and Road Initiative for Asia; progress and challenges on transboundary water cooperation; new challenges to cooperation with the rise of the LMC; and trends, challenges, and successes for Southeast Asian media to consider when reporting on the Mekong and China's role in the region. EJN’s Sim Kok Eng Amy moderated the last session with a panel consisting of journalists from China, Myanmar and Vietnam.

Following the public forum, participating journalists and representatives from EJN and ChinaDialogue spent three days along the Mekong River in Chiang Rai province in northern Thailand. 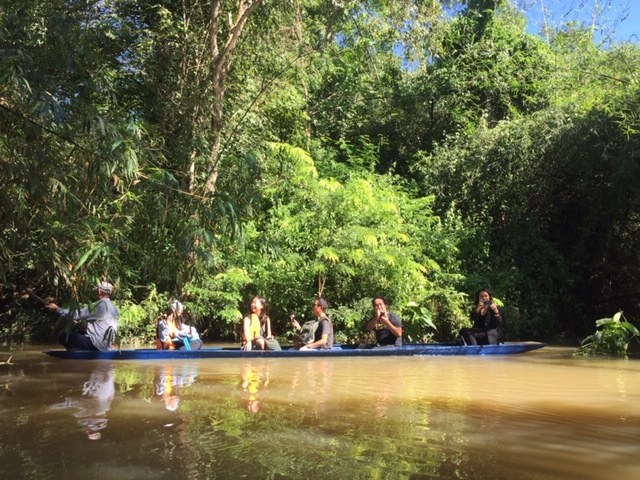 Facilitated by the non-profit human rights organization International Rivers, the group met with local villagers who successfully fought off a plan to develop the local wetland forest into a special economic zone. The group also met with local academics and activists who have been documenting the negative impacts of dam constructions along the Mekong River and lobbying authorities and Chinese investors to conduct environmental impact assessments in a transparent manner.

Those efforts produced a first-ever dialogue between the Chinese dam construction company Datang Overseas Investment and local activists to discuss the plan to construct Pak Beng dam in Laos in early 2019. Nevertheless, plans for constructing dams along the stretch of the Mekong River that the group visited show no sign of abating.

In addition to gaining new understanding of the environmental issues related to the changing role of China in the Mekong region, participants said the workshop brought home to them the importance of networking and collaboration with journalists from other Mekong countries. The participants have already started a Facebook group to share information and are talking about future collaboration for stories that highlight cross-boundary environmental issues.