MANILA - For the 18 journalists and journalism students who attended the training workshop on Reporting “Cold” Environment Cases in the Philippines last June 28, it was a look-back, a review, and for some, a jarring reminder of the horrors of covering an environmental disaster. The workshop was led by the VERA Files and was supported by the Internews’ Earth Journalism Network (EJN).

It is not uncommon for local journalists to cover one natural calamity after another, the Philippines being one of the countries most vulnerable to typhoons, earthquakes, and volcanic eruptions. It is also not uncommon that stories about these disasters would disappear from news headlines after a certain period.

By looking into “cold” environment cases, VERA Files hopes to rekindle public interest in these issues and highlight lessons that would be useful in crafting laws and policies that could prevent a repeat of these disasters.

In police lingo, the term “cold case” refers to a crime or an accident that has not yet been fully solved and is not the subject of a recent criminal investigation, but for which new information could emerge from new witness testimony, re-examined archives, new or retained material evidence.

VERA Files uses the term in its project, Reporting on Cold Environment Cases, to refer to disasters that had caused countless deaths, serious injuries or ailments and massive damage to the environment, but which have long been out of the headlines.

Borrowing the dictum made famous by writer and philosopher George Santayana that "Those who cannot remember the past are condemned to repeat it," VERA Files encourages environment reporters to revisit past disasters and learn lessons from them.

The Project kicked off with a training workshop last June 28. It opened with participants introducing themselves, talking about their experience writing about the environment and their desire to improve investigative reporting skills, find new angles, and learn how to sustain coverage of disasters beyond the usual news cycle.

That session became the venue for some of the journalists to recall their experience covering the November 2013 super typhoon Yolanda (international name Haiyan) that devastated several provinces in the Visayas and killed more than 6,000 people.

Princess Gatmaitan, head researcher of GMA 7’s Reporters Notebook, shared the difficulty of controlling one’s emotions to concentrate on the job of reporting.

The same dilemma was echoed by Zanneth Lago, a freelance broadcast journalist, about the struggle of keeping a distance in an emotionally-charged situation when your heart bleeds for the subjects of your report.

Freelance journalist Tristan Manalac said the Yolanda tragedy caused trauma not only among those who lost family, friends, and property, but also deeply affected the first responders, many of whom switched jobs later.

Philippine Daily Inquirer’s Melvin Gascon said that with an average of 20 typhoons hitting the Philippines in a year, journalists are indeed like “storm chasers.”

Freelance journalist Dinna Louise Dayao said through writing, she would like to help children cope with disasters and lessen the impact of these calamities on people. 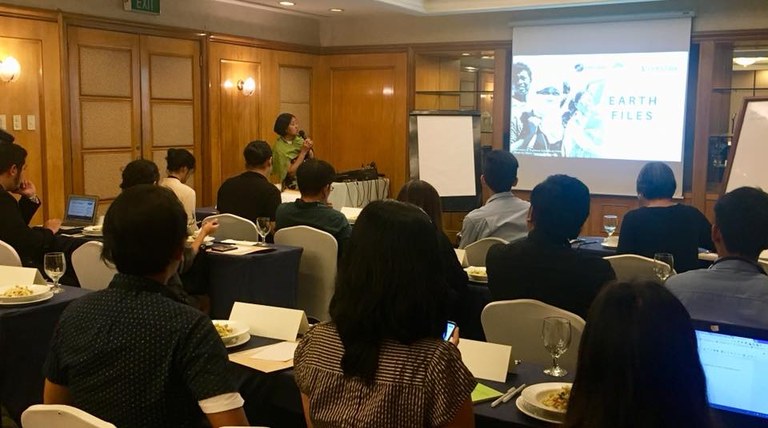 Participants in the workshop are introduced to the site Earth Files which documents 'Cold' environmental cases and news stories / Credit: Imelda Abano

A number of participants also expressed concern over irresponsible mining activities in the country which have caused environmental destruction, among them the 1996 Marcopper mining disaster in Marinduque in the central Philippines, where a whole village was buried under six feet of toxic mine waste.

Imelda Abaño, EJN’s Philippines and Pacific Content Coordinator, introduced EJN to the participants, describing its objectives of improving the quality and quantity of environmental reporting worldwide, and giving a rundown of its current projects. She highlighted the importance of environmental reporting and incorporating the plight of marginalized people particularly in the communities.

Ron Gutierrez, a lawyer and law professor who handles environmental human rights litigation and is the executive director of non-profit Upholding Life And Nature (ULAN), underscored the importance of knowing Philippine environmental laws in his talk.

From the queries of the participants, Gutierrez expounded on many aspects of issues that can be pursued in writing about the environment.

During the workshop where participants were divided into three groups, they identified a topic they want to report on, formulate a story hypothesis to guide their research, and list all possible sources and interviews relevant to their story idea. They later gathered inputs from the floor.

VERA Files trustee Rosario Liquicia challenged the attendees to produce environment stories based on the ideas and reporting tools they learned from the training workshop.

Of the 18 participants, 12 were journalists from various media outfits including some of the country’s biggest mainstream newspapers (Philippine Daily Inquirer, Philippine Star) and television networks (ABS-CBN, GMA); and six were university students currently doing investigative research on an environmental issue.