Social media is proving its important role in promoting environmental awareness to the young generation in Vietnam and throughout SE Asia (Credit: Judith Scharnowski)

“I am frequently on several environmental online forums and campaigns led by Vietnamese, who have addressed Hanoi’s logging of 6,700 trees, the Thai Binh deforestation for economic development, and the construction in Cat Ba,” says Tran Thi Thuy Binh, a member of the Vietnam Forum for Environmental Journalists in Hanoi.

Binh, along with 40 million other net-savvy young Vietnamese, appears to be part of a rising tide of environmental nationalism sweeping the nation. What’s most surprising is that Facebook, once banned in Vietnam, has now proven to be an attractive platform for organizing environment rallies. With a population of 93 million and an increasing Internet user base, social media has proven to be the first choice among the educated Vietnamese youth.

Their online activism was highlighted last year in Ha Tinh province, the scene of the Formosa Plastics Corporation’s steel plant’s environmental crime, where citizens took to the streets, even rallying near Hoan Kiem Lake in Hanoi, to protest the Taiwanese corporation’s improper discharge of untreated toxic wastewater into the East Sea.

It was a turning point for Vietnam’s environmental and social activists, many who became first-time citizen reporters and posted their photos of tons of dead fish swept along a 125-mile coastline, devastating sea life and local economies dependent on fishing and tourism spanning several provinces from Ha Tinh, Quang Binh, and Quang Tri. With more than 35 million users, Facebook is rapidly becoming a lighting rod for environmental activism and sparking demands for improved environmental safeguards. 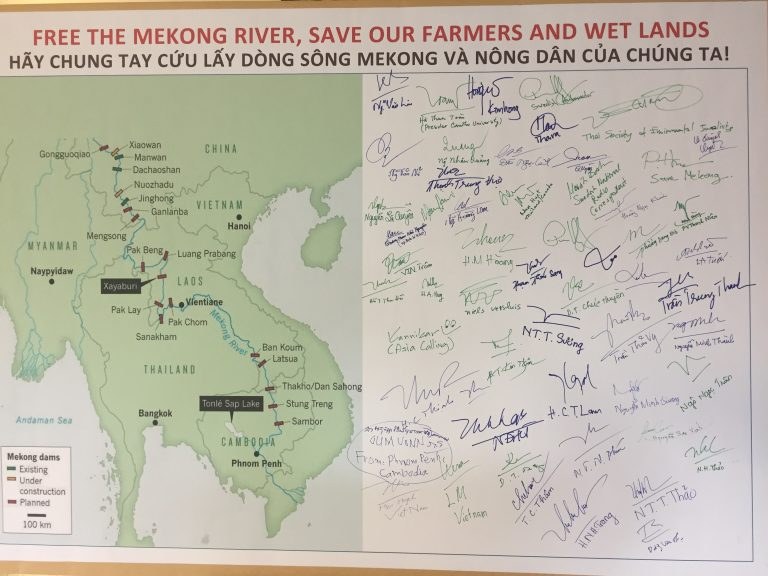 The Formosa environmental disaster succeeded in creating a nation-wide opposition to unchecked industrialization in unprecedented ways. Citizens, especially the young, are demanding a clean environment. As a result, there’s a growing environmental awareness campaign.

Environmental activist Nguyen Huynh That believes that the Formosa steel plant ecological disaster “generated a social protest against an unchecked industrial development and signaled a new wave of environmentalism through Facebook postings.”

In two decades, Vietnam’s rapid industrialization has reduced poverty and helped raise the country’s per-capita income to over $3,600, dramatically propelling it past poorer neighbors like Laos and Cambodia. However, this rapid build at-all-costs industrialization occurs generally at the expense of the environment, especially with its corresponding pressure that’s placed on natural resources.

Despite an early government policy discussion in 1985 that called for a national conservation strategy, no such strategy has ever officially been adopted. In 1991, Hanoi announced a national plan for the sustainable management of the country’s natural resources. However, it was neither institutionalized nor implemented until the Ministry of Science, Technology and Environment (MOSTE), and the Ministry of Natural Resources and Environment (MONRE) were created, along with the Vietnamese Environment Agency in 2008.

Pressure from the international donor community and local shareholders, resulted in some successful policy changes, but the new environmental laws failed to provide any legal enforcement to ensure compliance. In fact, five years ago the Environmental Performance Index listed Vietnam in the top ten worst countries for air pollution.

Because of Vietnam’s environmental enforcement weakness, a litany of damages to the land and water continues to mount: two thirds of Vietnam’s forests are in decline, mainly due to massive illegal logging; air pollution increases daily due to the growing number of motorbikes; wastewater is released untreated; and industrialization pollutes rivers and streams.

It’s no wonder that Vietnam has witnessed the emergence of prominent non-governmental organizations like People and Nature Reconciliation (PanNature), Centre for Water Resources Conservation and Development (WARECOD), ECO Vietnam Group, Green Innovation and Development Centre, and Save Vietnam’s Wildlife (SVW), to name a few.

Also, Mekong Eye previously reported on Vietnam’s photo campaign, “I Can’t”, directed at the proliferation of coal power generators. Sponsored by Vietnam’s chapter of the global climate change NGO 350.org and the Center of Hands-on Actions and Networking for Growth and Environment (CHANGE), it featured popular Vietnamese actors, musicians and artists wearing gas masks, performing before a devastating backdrop of smog and climate devastation.

Government officials like Tran The Loan, the deputy director of the Vietnam Environment Administration (VEA) has asserted: “Environmental pollution in our country has become alarming.” 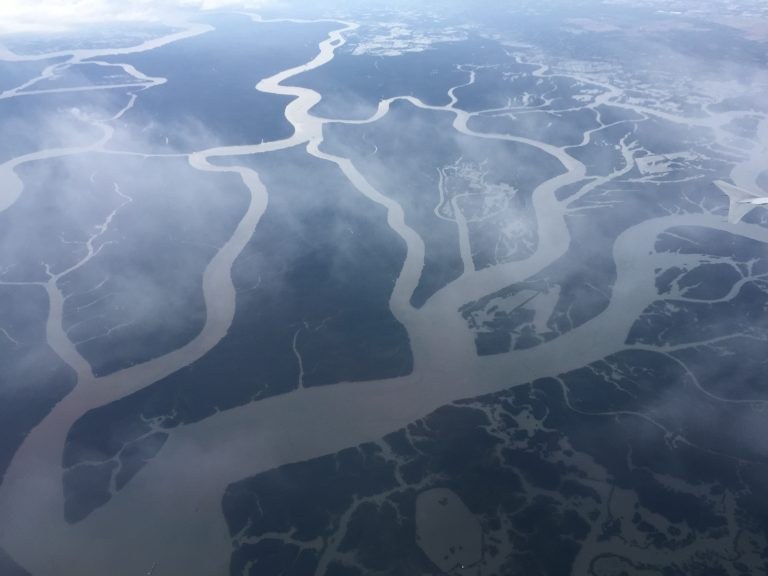 Distributaries of the Mekong River in Vietnam’s delta region. Source: The Mekong Eye

While it’s true that the Vietnamese have recognized the importance of environmental protection through the introduction of national laws for environmental impact assessments, these laws have not been transparent and did not involve the participation of the people.

As early as 1994, Hanoi introduced the national law on environmental protection, yet did little to influence or monitor the planning and decision-making on industrial zones and the direct impact on the environment. According to a study on the role of public involvement in environmental impact assessment in Vietnam, credit should be given to the government for reviewing the environmental law in 2005, deciding that “participation from communal People’s Committees and local residents must be included in any EIA.”

“It is largely through social media that young people like Hoang Thi Minh, the leader of Change and 360 organizations, based in Ho Chi Minh City, are bringing people together to protest ecological damage to Vietnam’s landscape and seacoast,” claims Le Thu Mach, a lecturer at the Academy of Journalism and Communication.

The online protests associated with this degradation of the environment is evident in the ManForTree posting on Facebook; it reflects an effort to collect the signatures of Hanoi residents to protest the mass logging of over 6,700 old trees in ten urban districts.

In an attempt to increase the ranks of online environmentalists, Mekong Matters Journalism Network has assisted with the professional training of citizen reporters in the Mekong with their well-placed network of eyes on the myriad of environmental challenges in the Mekong Delta. This network was established in September 2014 and continues to link environmental bloggers, citizen reporters, and journalists from Cambodia, China, Laos, Myanmar, Thailand, and Vietnam.

According to Adam Hunt, an Internews media trainer (with its Earth Journalism Network) who has led several environmental media training programs in the region, including several in Can Tho: “The rapid pace of development in the Mekong is creating more opportunities for reporters to find innovative and important stories.” Hunt’s Mekong Eye website regularly showcases news from these reporters, and it has become an effective information resource for villages and government officials.

Over the course of the past five years, the Vietnamese have protested numerous environmental issues, including textile companies, sand dredging, the hydropower project in Cat Tien National Park, pig farms, coal power plants, cement factories, and most recently the steel plant in Ha Tinh.

“Social media is proving its important role in promoting environmental awareness to the young generation in Vietnam and throughout SE Asia,” says Khiem Nguyen, founder of Mekong Delta Youth, who’s now pursuing a Masters of Resource Management in New Zealand.

This era of social media contributes has proven effective in bringing together crowds of local citizens to protest a given environmental issue. But the jury is still out as to whether it will lead to an environmental structural change from Hanoi.

Nevertheless, the recent announcement by Prime Minister Nguyen Xuan Phuc to halt work at a $10.6 billion steel plant over concerns surrounding its environmental impact surprised many citizens. Some suggest that the government is attuned to the growing resentment among younger Vietnamese about the granting of project licenses without sound environmental impact studies.

Climate disruptions, notably floods and drought, are not new in the Mekong Delta, but last year’s historic floods and drought, coupled with expanding industrial development, has ushered in more online forums among citizens and nearby academics at Can Tho University. Last week’s two-day Can Tho ‘International Media Workshop’ on water security and narratives in the Mekong Delta highlights the emerging state of ‘green politics and environmental activism found in the lower delta. The program brought together a dozen foreign (Mekong) journalists and ten Vietnamese, along with scientists and other stakeholders.

Additionally, the workshop raised awareness about the need for improved communication and media practices with regards to environmental security matters. It also enhanced information-sharing among citizen-reporters and journalists in the region.

“People are better informed because of the Internet. Journalists and local Facebook users do provide information to more citizens and also to the government to take action in safeguarding their environment on issues like riverbank and coastal erosion, inland salinity intrusion, and water contamination,” says Nguyen Minh Quang, a lecturer and writer on conflict studies and politics at Can Tho University. 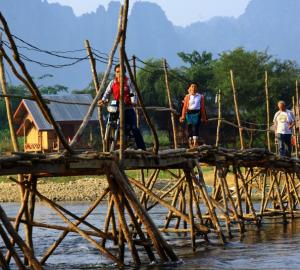