Webinar: Communicating the health of the Mesoamerican Reef

Webinar: Communicating the health of the Mesoamerican Reef

The Mesoamerican Reef, or MAR, is the largest barrier reef in the Western Hemisphere, extending more than 1,000 kilometers along the coasts from Mexico to Belize, Guatemala and Honduras. But why is it important? And why does its health matter?

These were some of the questions addressed during two back-to-back webinars hosted by Internews’ Earth Journalism Network (EJN) and the Healthy Reefs for Healthy People Initiative (HRI) on February 18.

More than 40 people from Latin America and the U.S. joined the two sessions – one in Spanish (which you can view here) and the other in English. Many of the Spanish-speaking participants were working journalists and were interested in learning about the importance of herbivorous fish and their function with the reef’s ecosystem; how products used in the agroindustry can damage the reef; and how to encourage decision-makers to take action on its behalf.

Melina Soto, the Mexico coordinator for HRI began the Spanish-language session by introducing participants to the bioregion that the MAR encompasses.

“It extends for 1,000 kilometers of coastline and groups together seagrasses, mangroves, dunes and different types of coral,” she said. “In addition, the MAR provides different ecosystem services and supports the life of more than 2.5 million people in the region.”

Soto also recalled that in 1997, the four countries bordering the MAR committed to protect the eco-region through what became known as the Tulum Declaration. Later, other initiatives emerged aimed at promoting sustainable development in the name of ocean conservation and representatives of conservation funds across the four MAR countries created the Mesoamerican Reef Fund, which drives regional funding and partnerships for the conservation, restoration and sustainable use of the reef.

HRI was launched in 2003 to evaluate those conservation initiatives and the health of the reef system. A global collaboration among reef researchers, managers and conservation organizations, HRI draws on a database of indicators developed through scientific information and analysis to generate an annual report card on reef health. The report card monitors coral and fleshy macroalgae cover, herbivorous fish biomass and commercial biomass.

The latest Mesoamerican Reef Report Card, released on February 13, shows that 46 percent of the 286 sites monitored now rank in poor health compared to just 37% two years earlier. The overall Reef Health Index has decreased for the first time in 12 years, it said.

Belize had the highest reef health index and Honduras saw the biggest drop, mainly from a dramatic reduction in fish, likely due to the use of illegal gear, a lower prevalence of protected marine areas and increasing lack of enforcement of existing regulations, said Melanie McField, who led the English-language webinar and is HRI’s founder and director.

HRI also decided to streamline its recommendations in this report, McField said, to really focus on enforcing existing regulations, creating more fish replenishment zones and engaging with the private sector, such as dive and tourism businesses.

Lucy Calderón, editor of the Mesoamerican Reef Reporting Project at EJN, provided some story ideas that could help promote climate action between citizens and decision-makers and encouraged journalists to pursue more in-depth reporting.

McField recognized the value of on-the-ground investigative reporting in, for example, uncovering the reasons behind the drop in fish in Honduras. The data shows that there are fewer fish, she said, but “we need to get into the communities and ask around and  get that knowledge of what actually happened.”

Some of the story ideas she put forth were around the need to keep waters clean or clean them through measures like law enforcement, solid waste management, and management of farms upstream. According to HRI’s report card, less than 10 percent of all wastewater is treated in Mexico, Belize and Guatemala.

These webinars were part of EJN’s Mesoamerican Reef Reporting project, which supported 10 reporters in Central America and Mexico to produce stories on the MAR and hosted two media workshops last year on the topic. You can read those stories on EJN’s website and find out more about our upcoming opportunities, including our Fellowship to attend the 2020 UN ocean conference in Lisbon in June.

Banner image: Biologist takes measures of the reef, in the foreground the progress of the white syndrome on a coral is distinguished / Credit: Rodrigo Garza 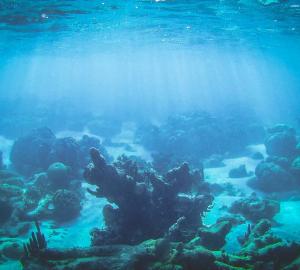