Why does Climate Change reporting matter for Pacific Island journalists?

Climate change can be a challenging story to tell because of its complexity. To journalists covering climate-related topics, the bigger task is producing stories that would shape appropriate climate adaptation policies and strategies, as well as generate public attention, debate and action.

But how well-prepared are journalists from Pacific region to cover the climate change story? This question is relevant to a region that experiences numerous and serious environmental challenges and that is highly vulnerable to the impacts of climate change such as fiercer typhoons, rising seas and flooding. The climate change impacts in the coastal settlements are significantly affecting livelihoods, culture, tourism, health, agriculture and fishing sectors. 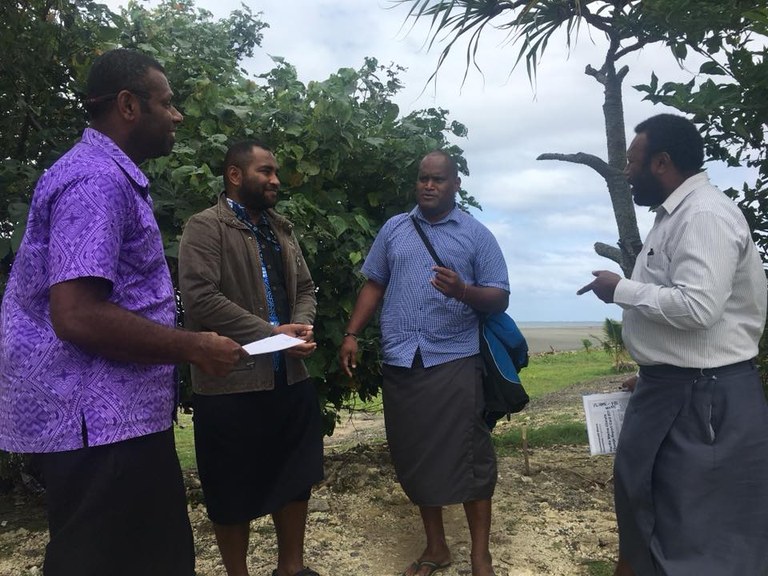 Pacific Island nations are among the most vulnerable in the world to the impacts of climate change, yet few journalists are well-trained, connected and resourced to meet the challenge of informing the local communities and policymakers of climate-related issues.

Siosinamele Lui, a climate scientist and Climate Traditional Knowledge Officer of Secretariat of the Pacific Regional Environment Programme (SPREP), said it is important for journalists and communicators to understand the science of climate change in order to report on stories accurately and effectively.

In response to this gap, the media workshop on Strengthening Media Capacity on Climate Change Reporting was conducted on July 24-25 with the aim of enhancing the capacity of 28 journalists and communications officers in reporting on climate change and increasing the quantity and quality of reports and other forms of information on climate science. The participants come from Tuvalu, New Caledonia, Solomon Islands, Papua New Guinea and Fiji. 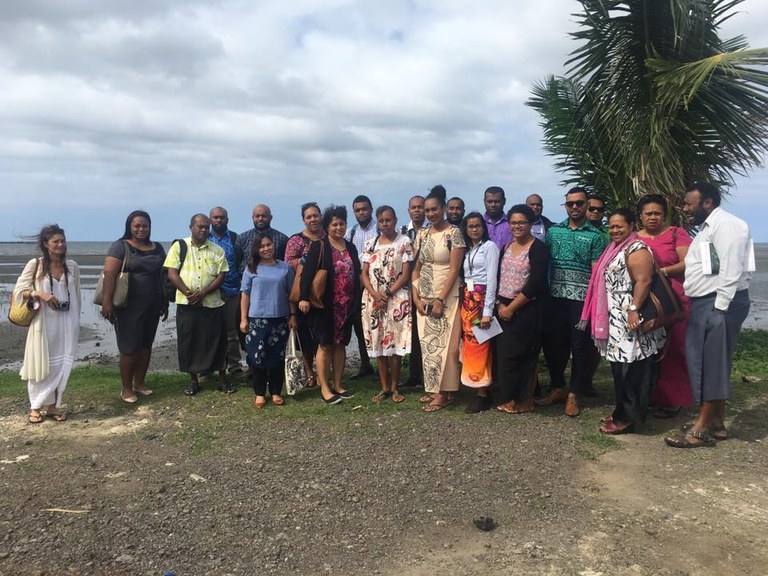 “ There is no doubt that climate change is the biggest environmental challenge of the century. The media, including the communicators, have significant role to play in raising public understanding and to report accurately on the consequences of climate impacts in the communities most especially with regards to adaptation and resilience. In the Pacific, it is important to tell their own stories,” said Imelda Abano, Internews’ Earth Journalism Network (EJN) Philippines and Pacific Region Content Coordinator.

The two-day workshop was a collaboration between Internews’ EJN, the Secretariat of the COP23 Presidency and the SPREP, in coordination with the Pacific Islands News Association (PINA) and the Pacific Environment Journalists Network. 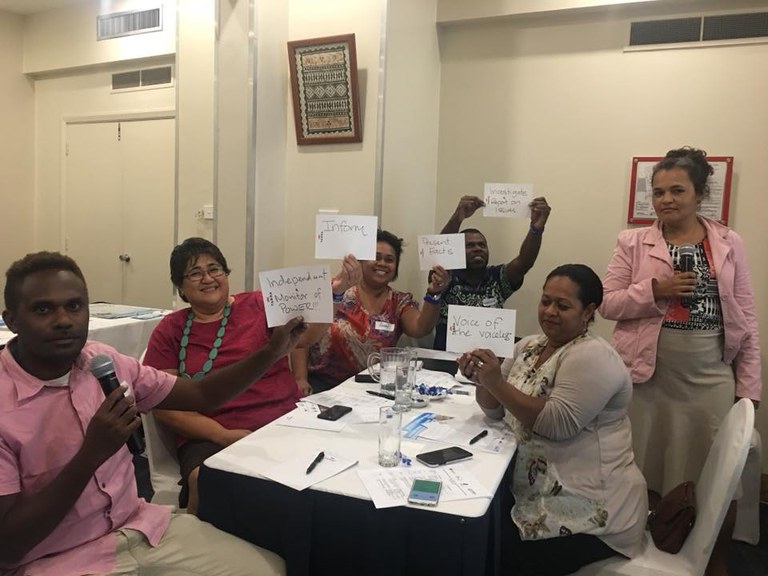 The workshop was organized as a side event to the high-level Climate Action Pacific Partnership (CAPP) Conference held on July 26-27. It is intended to also prepare journalists ahead of climate diplomacy events in the lead up to COP24 to be held in Katowice, Poland in early December. 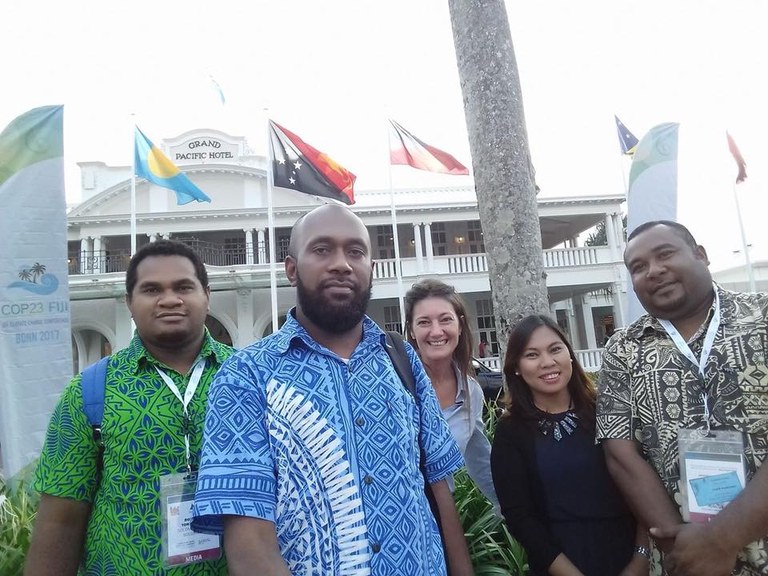 Abano said the workshop aimed at strengthening the capacity of journalists to communicate climate change in their respective countries and the region. The workshop also gave journalists the opportunity to share their stories, experiences, approach, challenges and possible solutions on reporting climate-related issues in their countries. She added that the Internews’ EJN is expanding its activities to strengthen Asia and Pacific journalists’ ability to cover the environment and connect vulnerable communities, through training and development of knowledge materials, support for story production, sub-grants for capacity building, fellowships global environmental conferences, and the development of innovative multimedia platforms.

SPREP, together with PINA, launched the Ocean Resource Toolkit for the media in the Pacific at the workshop with the aim of providing information to strengthen news reporting on ocean issues. 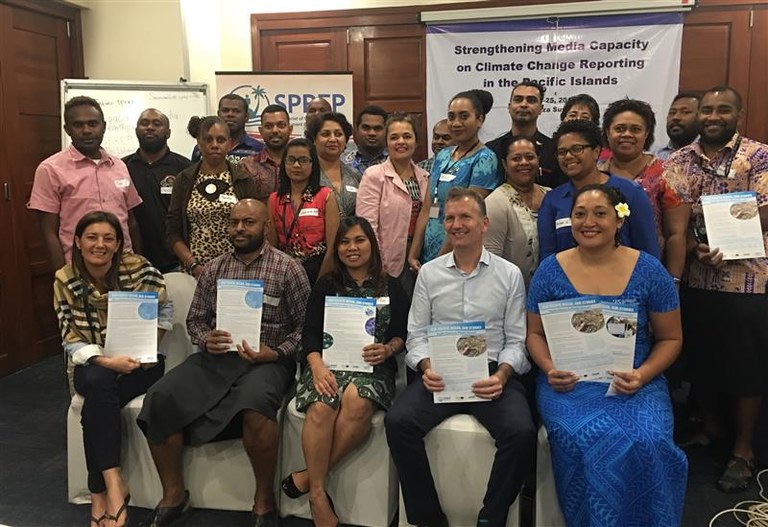 It makes sense to get the insights of Pacific Island journalists on trends, experiences, weaknesses and quality of climate change reporting.

For Kelly Vacala, a journalist from the Fiji Broadcasting Corporation based in Suva, the impacts of climate change is becoming visible every day in the Pacific.

“ Thousands of people live in fear of losing their home or even their loved ones. From rising sea levels, unpredictable climatic events to depletion of our natural resources, climate change wipes out everything in it is way,” Vacala lamented.

Vacala said the two-day workshop on Strengthening Media Capacity on Climate Change in the Pacific made her realize that there are other aspiring journalists that need to understand the impacts of climate change as a global issue.

“ I believe that Internews Earth Journalism Network can help train young journalists in dealing with environmental reporting by conducting training workshops and allowing them to share their knowledge and understanding of climate change with actual experts and vice versa,” she said.

Click below to read the photo essay created by one of our workshop participants, Aude-Emilie Dorion, from New Caledonia.