It is tempting to look at fisheries and aquaculture in a vacuum, as if simply the rational management of wild fish and the implementation of sound aquaculture standards would be sufficient to keep the ocean healthy. But there are large, human-caused phenomena now affecting the oceans that severely impact the abundance of seafood. As with fisheries and aquaculture management, these issues are complex and worthy of the journalist’s attention. It is beyond the scope of this toolkit to produce an in-depth discussion of every major environmental problem affecting the ocean, but below follows a brief outline of topics ripe for future investigation. 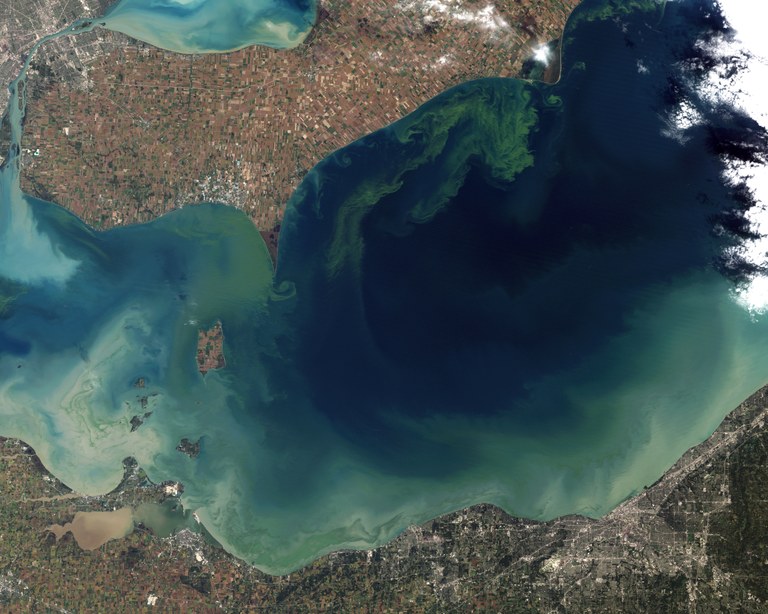 A regular influx of nitrogen and phosphorous-based nutrients is critical to the productivity of the ocean. Indeed, it is because of the presence of these two nutrients in near shore areas that blooms of phytoplankton are able to take place and form the basis of a marine food web. But it is possible to have too much of a good thing. In the last 100 years, nitrogen and phosphorous loads entering the marine environment have been surging, primarily from synthetic fertilizers, manure lagoons generated by livestock and from municipal and industrial wastewater.
When excessive amounts of nitrogen and phosphorous-based wastes enter a watershed, photosynthetic algae bloom in large amounts – larger than can be consumed by extant filter feeders and other organisms. When those same algae die, bacteria consume them and use up oxygen in the process of respiration. Under certain conditions, so much oxygen is consumed that the water becomes hypoxic, or so low in oxygen that complex life is compromised. In the last decade journalists have come to term these hypoxic areas “dead zones.” Though not completely dead, they are areas where fisheries can be diminished due to lack of oxygen.

There are many ways to combat hypoxia, ranging from better farming techniques to the use of seaweeds and bivalves to process excess nutrient and algae loads. It’s instructive to note that after the fall of the Soviet Union and the end of fertilizer subsidies in the Danube Basin, the world’s largest “dead zone”, in the Black Sea, largely disappeared. But on a global basis, dead zones are growing. There are now 245,000 square kilometers of dead zone in the world affecting ecosystems on every continent except Antarctica. In China, the most notable hypoxic areas occur seasonally in the East China Sea offshore west of the Yangtze River delta, in the Yellow Sea off the Yellow River delta, and close to shore in the vicinity of the Pearl River delta. 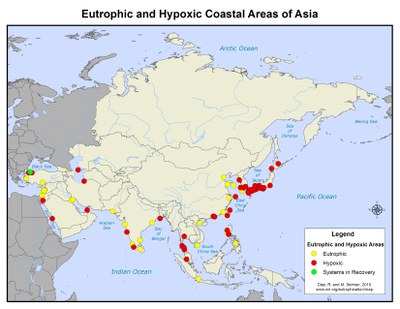 The ocean at first glance appears to be huge. Looking at its broad expanses we are inclined to imagine it all full of fish. But when one examines the actual portions of the ocean that produce significant amounts of life, the ocean becomes a good deal smaller. 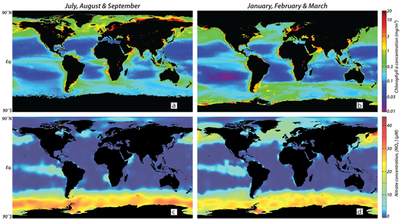 The map above shows zones of what is called “primary production” in the ocean – areas where photosynthetic phytoplankton congregate forming the bases of marine food webs. It is immediately apparent that these zones of productivity occur close to shorelines, where nutrients drain into the sea from land. These are the biological hotspots of the sea. It is in part for this reason why nations were so motivated to stake a claim on their exclusive economic zones out to 200 nautical miles, as these are the richest parts of the oceans.

At the very edges of our continents where rivers meet the sea, ecological environments called estuaries are formed. In these areas, 70 percent of our commercial seafood species spend at least part of their lives. The most important biological component of estuaries are the areas in which grasses, worms, shellfish and other organisms collectively form ecosystems called salt marshes. These environments serve as safe havens for juvenile marine species. Salt marshes are the most productive ecosystems on earth. The average salt marsh can sequester 10 times as much carbon as a tropical rain forest.

Salt marshes are also areas that are being increasingly impacted by humans. In the last two centuries, coastal wetlands have been systematically drained to make room for housing, agriculture, and industry. In developing nations this process has accelerated greatly over the last half century. In China, where coastal development is only just starting to ramp up, 30 percent of the country’s natural wetlands were lost in a single decade, from 1990-2000. This loss is expected to continue as sea levels rise. Rising seas inundate brackish marsh land, cause vegetation loss, and exacerbate the collapse of salt marsh. A large portion of the fish of the world relies on rivers for a portion of its lifecycles. “Diadromous” fish like salmon (family Salmonidae), sturgeon (family Acipenseridae), shad and herring (family Clupeidae), and eels (order Anguilliformes) all migrate into rivers for a portion of their lives. The last 200 years have seen a serious impediment to the lifecycles of these fish in the form of dams. Humans have constructed dams for a variety of purposes ranging from irrigation to the supplying of mechanical power to adjacent mills to the generation of widely distributed electricity. Whatever their purpose, they now seriously hinder the passage of diadromous fish. There are now 48,000 large dams worldwide (“large” being defined as higher than 15 meters). Sixty percent of the world’s major rivers are blocked by dams, and this is just taking into account large dams. Smaller obstructions number in the tens if not hundreds of millions. All of this limits the exchange of biological energy between stream and ocean and decreases overall species diversity. China is currently the world leader in the construction of new dams, but hydropower development is surging throughout the developing world. “Fish passage,” or the retrofitting of dams with ladders and other structures designed to aid fishes’ ability to swim past dams, is often proposed as a compromise to communities that would seek to expand hydropower. But as recent studies have found, most fish passage technology is ineffective, and dams nearly always result in serous disruptions to diadromous fish populations.

Perhaps the most worrisome problem the ocean faces is a newly observed phenomenon called ocean acidification. Acidification is a direct result of heightened amounts of carbon being introduced into the atmosphere through the burning of fossil fuels. Though this phenomenon is more commonly associated with the changing of the Earth’s terrestrial climate, the oceans are being impacted too.

Ocean acidification is most notably visible in the diminishing of coral reefs. Acidification also seems to be affecting the culture of bivalves like oysters and clams. But there is a much larger issue at stake with acidification. At its lowest rungs, energy is transferred in the ocean food chain from photosynthetic phytoplankton (plant-like micro-organisms) to predatory zooplankton (animal-like micro-organisms, which feed on phytoplankton). Predatory zooplankton then consumer smaller forms of zooplankton are themselves, in turn, consumed by fish. The problem with acidification is that most zooplankton have calciferous (calcium-based) shells. A significant drop in the levels of zooplankton will surely mean a decline in the amount of fish in the sea.

Ocean acidification is being observed throughout the world but is most pronounced in the Pacific. Shellfish farmers in United States’ Pacific Northwest region have experienced several years where shellfish larvae failed because of an inability to adequately form shells.

Ocean temperatures are rising at a slower rate than terrestrial temperatures, but even a subtle change in temperature in the ocean can cause serious disruptions. The melting of the polar ice caps means that more and more territory will become available to global fishing fleets, and a paucity of agreements over those new fishing grounds means there is a large potential for wide-scale overfishing.

More significantly, water temperature changes seem to be altering the migratory patterns of many species of commercial seafood species. It is still too early to know how those shifts will manifest themselves, but shifts will require a broad rethinking of management strategies, commercial quotas and territorial boundaries. As temperatures change and ice floes melt in the Arctic and Antarctic, releasing large quantities of freshwater into polar ecosystems, salinity shifts may also occur, further changing fish distribution.

Most significant of all, warming seas could disturb the fundamentals of the marine food web. This goes back to the essential phytoplankton/zooplankton relationship that underpins all marine life. Phytoplankton blooms tend to be driven by daylight. As days lengthen toward the end of winter, these photosynthetic organisms bloom to take advantage of the increased sunlight. Meanwhile, zooplankton blooms tend to be triggered by temperature, not light. With warmer oceans, zooplankton are likely to bloom too early, before phytoplankton is present. This could eventually cause mass die-offs of zooplankton, which in turn would cause similar die-offs among the larval fish that depend on zooplankton for their fodder.

Mercury, PCBs and other Industrial Pollutants

The environmental factor in the ocean that is perhaps of greatest concern to a popular readership is industrial pollutants and the role they play in contaminating seafood supplies. This, like many ocean problems, is one born during the 20th century and stems directly from innovations made in the chemical industry. The two most noted pollutants contaminating the global seafood supply are methylmercury and polychlorinated biphenyls or PCBs.

Methyl mercury differs from elemental mercury in that it is a positively charged ion that readily combines with molecules in the human body. It became internationally infamous after the Chisso Corporation of Japan dumped large quantities acetaldehyde into an enclosed body of water called Minimata Bay from 1908-1955 – a bay where large amounts of shellfish were harvested by the local population. Over 2,000 individuals were diagnosed with what came to be called Minimata Disease – a syndrome of severe birth defects marked by extreme skeletal and organ deformations. The Chisso Corporation finally settled claims with injured parties for a sum in excess of $80 million.

A much more common form of methylmercury contamination today comes from the burning of coal. Mercury is often contained in coal seams and when exposed to high heats during commercial combustion becomes “methylated” and thus absorbable by the human body. China is by far the largest burner of coal in the world.

Polychlorinated biphenyls or PCBs were invented in the late 19th century and used as coolants and inhibitors because of their chemical stability. Large amounts were released into the environment throughout the 20th century, and by the 1960s they became associated with various forms of cancer and heart disease. The production of PCBs was banned in the United States in 1976. But because of the extreme stability of these chemicals they have persisted in the marine environment for many years and will be with us for many years to come.

Both methylmercury and PCBs are problematic because of their tendency to “bio-accumulate” in the environment and “biomagnify” in individual organisms. Because both chemicals are resistant to degradation they are passed up the food chain even after the organism that contained them is consumed. A predatory organism, therefore, receives close to the total pollution load of all the organisms beneath it on the food chain. As a result, apex predators like tuna, sharks and swordfish will tend to have higher pollutant loads than smaller animals because they have in effect absorbed the pollution load of several rungs of the marine food ladder beneath them. Fish with long life spans may also be subject to high mercury and PCB levels because they have had a greater time span to accumulate pollutants.

Bioaccumulation and biomagnification in marine organisms.

As countries have become more aware of the dangers of these pollutants they have sought to ban their use in industrial production. Particularly successful has been the United States’ Federal Water Pollution Control Act, more commonly known as the Clean Water Act. But new chemicals collectively known as Persistent Organic Pollutants, or POPs, are constantly being invented and the ramifications of those new compounds are often poorly understood even as they are introduced into the marketplace. A reporter who covers the ocean will likely be the first to uncover the environmental consequences of these new compounds.