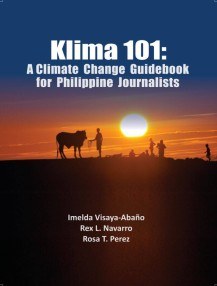 Climate change is a complex issue and the recently released Klima 101: A Climate Change Guidebook for Philippine Journalists aims to help journalists and editors, including journalism teachers and trainers, to navigate and understand scientific issues better. It hopes to provide a clear idea of the nature of climate change, what types of data and information journalists need to write or produce a story particularly on the impact of climate change on agriculture and food security, how to report climate issues effectively, and how to influence decision-making in the process, as well as generate public debate and action.

“The quality and quantity of reports in the mainstream media need to improve. For journalists, therefore, climate change is both a challenge and an opportunity. It is a complex subject that impacts on almost everything we do. It is the context in which stories will unfold,” said Imelda Abano, President of the Philippine Network of Environmental Journalists (PNEJ).

The report was released on September 17th as part of the 40th Anniversary of the Philippine Agricultural Journalists (PAJ) during its general assembly at the Philippine Coconut Authority Auditorum.

Klima 101: A Climate Change Guidebook for Philippine Journalists is the product of a series of media workshops that brought the country’s experts and journalists to discuss media coverage and communication of climate change science conducted in the past two years. 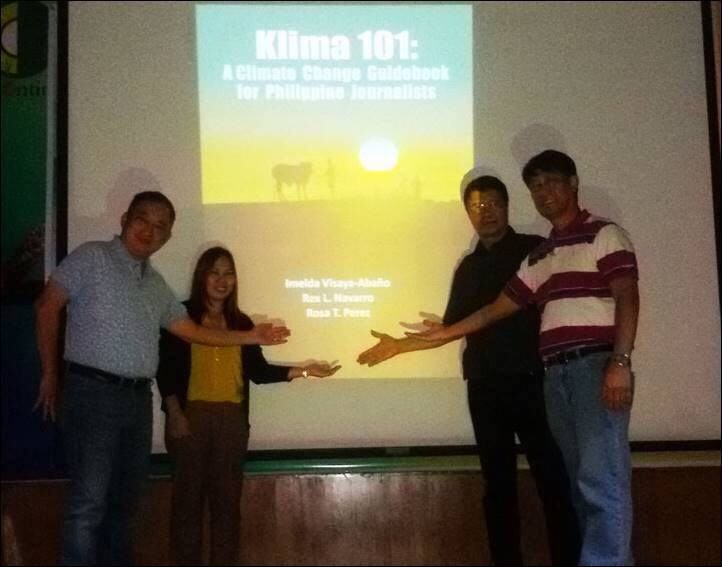 Each chapter is designed to provide background information that can be useful in understanding challenges that journalists face in covering climate change.

Chapter 1 represents an overview of what scientists know about the climate system and how it works. It introduces basic concepts concerning the likely impacts and a range of possible solutions, the best scientific data available on the observed changes and impacts to the Philippines, as well as the challenge to the agriculture sector.

Chapter 2 discusses agriculture as the country’s backbone for sustainable attainment of food security. This chapter consists of the impacts of climate change on agriculture, crop production, livestock, fisheries, water resources and on food security. It introduces the concept of climate-smart agriculture and other agricultural practices to make communities resilient.

Chapter 4 uses straightforward language to help journalists deal with the complexities of climate change stories. It includes the larger issue of what journalists need to pursue after the Paris Agreement was adopted in December 2015 during the 21st Conference of Parties (COP21) of the United Nations Framework Convention on Climate Change (UNFCCC). Aside from the pitfalls and quick tips on reporting, this chapter also tackles the outcome of a three-year study on the challenges and opportunities faced by Filipino journalists in communicating climate change. It features a sampling of climate change stories written by local journalists.

Chapter 5 In this chapter, a quick note on agriculture and climate change reporting is included. It also summarizes the discussion of a series of climate change media workshops held in the Philippines from 2015 to 2016, in which more than 500 journalists from Legazpi City, Tacloban City, Siargao Island and Tuguegarao City participated. The workshops were organized by the International Rice Research Institute (IRRI), CCAFS Southeast Asia, the Philippine Network of Environmental Journalists (PNEJ) and the Philippine Agricultural Journalists (PAJ).

Finally, the guidebook provides a glossary of technical terms that will help journalists in understanding and reporting climate change and communicating this to the average reader. Though not an exhaustive list, it provides details of non-media organizations, inter-governmental organizations, research centers working on climate change in the Philippines.