The Expansion of Global Fishing

The Expansion of Global Fishing 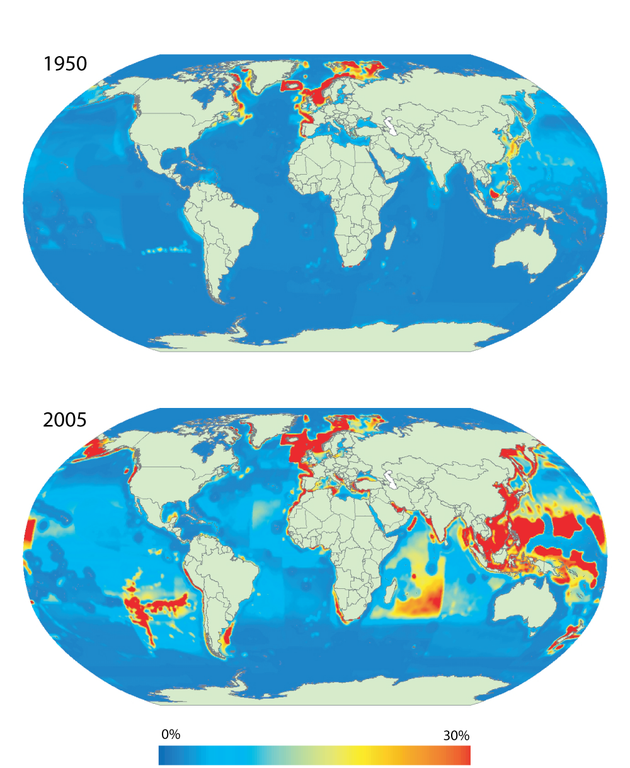 Seafood is the last wild food. Indeed we are at a place with the exploitation of wild seafood similar to where we were with terrestrial animals 10,000 years ago. It is as if we are just emerging from our Neolithic caves, trying to figure out how to eat from herds of wild animals while maintaining their long-term viability.

Up until the mid-1970s, attempts to rationally exploit wild fish had not fared much better than our ancestor’s Neolithic management techniques of wild land game. This mismanagement stemmed from the fact that humans had a poor and incomplete knowledge of the dynamics that underlie wild fish populations. This is understandable. For most of human history, our ability to catch fish was often compensated for by nature’s ability to replace them. Fish and shellfish are remarkably fecund. Most fish produce hundreds of thousands, if not millions, of eggs. As a result, when “removals” occur, fish have the potential to rebuild their populations relatively quickly. And while there have in the past been notable exceptions of locally specific overfishing in pre-industrial societies, a general global trend of over-exploitation of fisheries was not recognized until the mid-20th century.

Perhaps the greatest change in the dynamic between fish and humans came as a result of innovations stemming from World War II. Wartime research and development produced significant innovations in maritime technology. Sonar was perfected, enabling vessels to locate fish populations and fish-rich habitat remotely with greater and greater precision. Petroleum-based polymers were advanced considerably, allowing for the production of lighter-weight fishing line and nets. Diesel engines aboard fishing vessels were lightened and strengthened, increasing the range and the number of days at sea a vessel could spend fishing. Finally, mobile freezing technology was advanced, giving fishing vessels the ability to range the open ocean, freeze their catches at sea and continue fishing until their holds were full. There was also an economic and political driver behind all of this growth: nations reeling from food crises after World War II saw the subsidization of fishing as a way to alleviate hunger. Governments also saw expanding fishing fleets as a way to assert national sovereignty beyond their shores into the High Seas.

All of this greatly increased what is called “fishing effort,” or as the FAO defines it “the amount of fishing gear of a specific type used on fishing grounds over a given unit of time.” From the end of World War II to the present era the global fishing fleet has increased by 75 percent to 4 million vessels. With that increase came a dramatic increase in harvest. A rise from 20 million metric tons in 1920 to over 90 million metric tons in the late 1980s. At present it is widely recognized that there are simply too many boats, nets, and hooks in the water. According to the World Bank’s “Sunken Billions” report, the world’s fishing fleet is more than twice as large as it needs to be to catch the amount of fish that is available to be sustainably harvested.

The result is a phenomenon called “overfishing”, a condition in which a given population of fish or shellfish, sometimes called a “stock,” is exploited beyond a productive equilibrium point. Overfishing is now estimated to cost the world $50 billion per year. The same World Bank report cited above notes that 75 percent of the world’s wild fish stocks are “underperforming” – in other words, fished too heavily to produce a maximum, consistent yield. And while the total global catch has remained fairly constant at around 90 million tons for the last two decades, some scientists believe this consistency is an illusion. A recent study in the journal PLoS ONE noted that over the last half century fishing increasingly reached into larger and larger portions of the ocean. That territorial expansion continued even as the world catch leveled off. In other words, larger and larger portions of the ocean must now be fished in order to simply match the levels of the historical world catch.