A battle for survival in the Sundarbans

A battle for survival in the Sundarbans

As environmental pressures reduce livelihood options, villagers living in the region are claiming unfettered access to protected forest areas despite the high chance of tiger attacks. 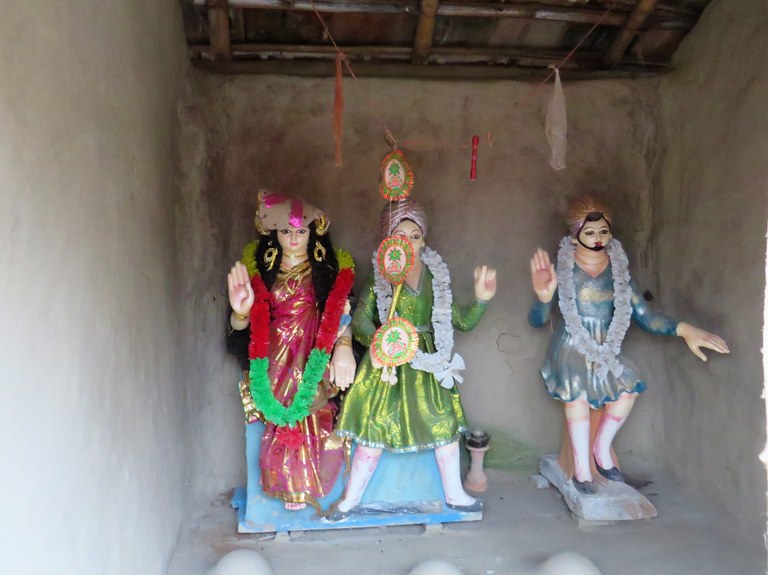 A temple to the forest goddess of the Sundarbans, Bono Bibi, sits in a village known locally as the Widow's Locality after the women whose husbands have been killed in tiger attacks / Credit: Namrata Acharya

Tags of bright red cloth blowing among the slender stems of trees are sometimes the only signs of human habitation in parts of the dense, daunting and lush green mangroves of the Sundarbans in coastal east India.

But bright though they are, these pieces of cloth are a sign of mourning, tied to a tree each time a tiger kills a human at the spot of the incident. The place then becomes a worship site of Bono Bibi, the forest goddess of the Sundarbans.

These red flags now appear almost every half kilometer along the rivers that snake through the Sundarban Tiger Reserve -- evidence that human-tiger conflicts are no rare event here.

Locals say tiger attacks have become more common in recent years as more villagers are forced to enter the reserve in search of crabs, honey or other forest goods they can sell to make a living.

Starting in the 1980s, live mud crabs from the Sundarbans became a popular export item to Southeast Asia. Based on growing demand, locals started to venture further into restricted forest areas to collect them.

Rahul Baidya, a live mud crab exporter from Kolkata, said around 50 percent of the crabs he sources for Thailand, Malaysia and Singapore come from the Sundarbans.

“Since the last seven to eight years, live mud crabs also started gaining popularity in China,” he added. “Now, about 90 percent of India’s export of the commodity is to China. The demand clearly exceeds supply.”

According to Baidya, exports of live mud crabs from India have risen around 30 percent in the last five years.

In the meantime, the population of the Sundarbans has grown, putting more pressure on natural resources at the same time that erosion was limiting the amount of land available for agriculture. In the Gosaba block, for example, where most tiger attacks take place, the population rose by around 11 percent to nearly 247,000 between 2001 and 2011.

After Cyclone Aila hit the region in 2009, vast swathes of land in the Sundarbans turned so saline that for many years agriculture became unviable and fish ponds turned permanently salty. That drove people living in the forest fringes to depend more on honey and crab collection from the jungle. 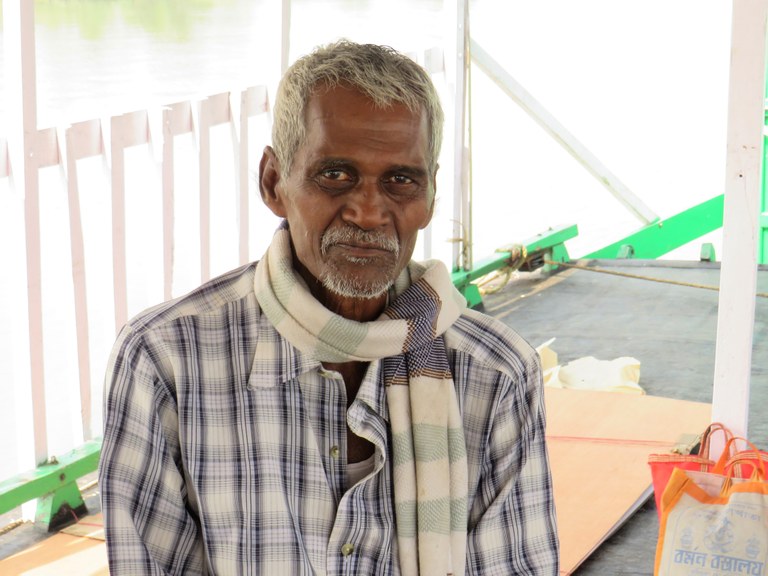 Nimai Mondal lost his father and younger son to a tiger attack. His older son continues to go into the forest to fish / Credit: Namrata Acharya

“Tigers have become more ferocious and they attack humans more frequently, as more and more people go for crab and honey collection,” says Nimai Mondal, who lives in Pakhiralay village and has lost two of his family members to tiger attacks.  “If we don’t go to the forest for our livelihoods, we will starve and die,” he added.

Nakul Jana, president of the Sundarban Tiger Widow Welfare Society, a non-profit organization, has, since 2012, been compiling the stories of women whose family members were killed by tiger attacks. One of the most shocking accounts is that of Bhagini Bhakta, who was six months old when a tiger killed her mother in 1999.

Bhagini lay in her mother’s lap as the family hunted crabs when a tiger pounced on the woman and dragged her into the forest. Tiny Bhaginiwas left behind slathered in the tiger’s saliva, earning her the nickname Bhagini, or Tigress.

Suparna Sarkar lost both of her parents in two separate tiger attacks.

“My father died when I was two,” she said. “After that, my mother used to go with three other people for catching crabs. My mother used to stay in the forest for five to six days. Every time she went, I used to wonder if she would come back. One day she didn’t.”

According to the West Bengal Forest Department, 20 people were injured and 24 killed by tigers in the last 18 years in South 24 Parganas, where the Sundarban Tiger Reserve is located. 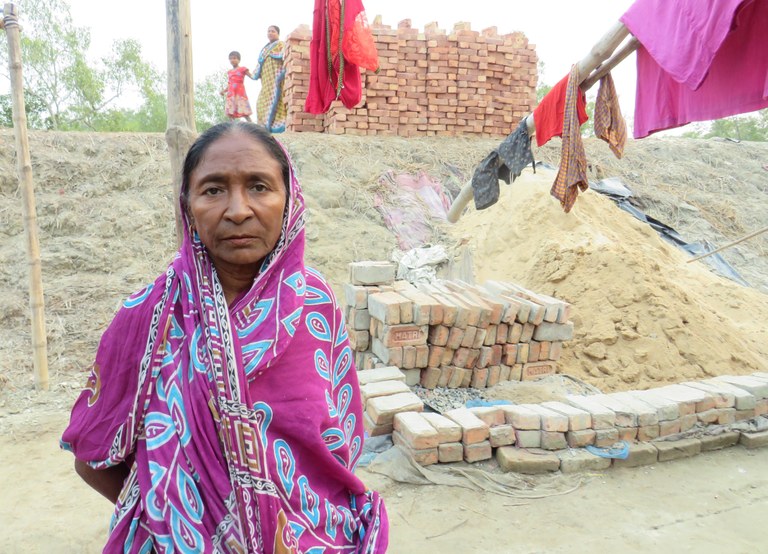 Pramila Barman lost her husband to a tiger attack. Now her daughter in law goes into the forest to hunt crabs / Credit: Namrata Acharya

Officially, the number of deaths has remained almost the same, one to four per year, over the years. But since a large number of deaths are not reported because those killed are often illegally hunting in the reserve forest, locals suspect the actual figure is much higher.

The Sundarban Tiger Widow Welfare Society estimates that the number of “tiger widows” residing in West Bengal is around 3,000. In the Gosaba block alone, 600 tiger widows are living at present, according to the society’s data.

On average, 100-120 people fall prey to tigers every year in the Sundarbans, says Jana.

More bodies are also being recovered since people now enter the forest in groups for protection.

“They give the tiger a fight and if they fail, they at least bring back the body,” he says.

According to Jana, the survival of close to 10 percent of the 1.5 million people in the Sundarbans depends on forest products, with fishing being the mainstay. Yet more than 85 percent of the fishermen in the region do not have proper licenses to catch fish in the buffer zone of the Sundarban Tiger Reserve, where crabs are found.

This buffer zone accounts for around 885 square kilometers and sits just outside a larger critical tiger reserve habitat that is nearly double that area.

Licenses to fish in the buffer zone were last issued by the forest department in the 1970s. According to data from the department, the number of boat licenses stands at about 1,900 today.

Senior official in the forest department say boat licenses are openly traded, with many people illegally renting them for as much as 50,000rupee (US$700) annually. Most fishermen, however, go into the forest without valid permits, a punishable offense that can lead to boat seizure and fines of up to 200,000 rupee and three to seven years of imprisonment. As a result, locals estimate that the vast majority of tiger deaths go unreported. 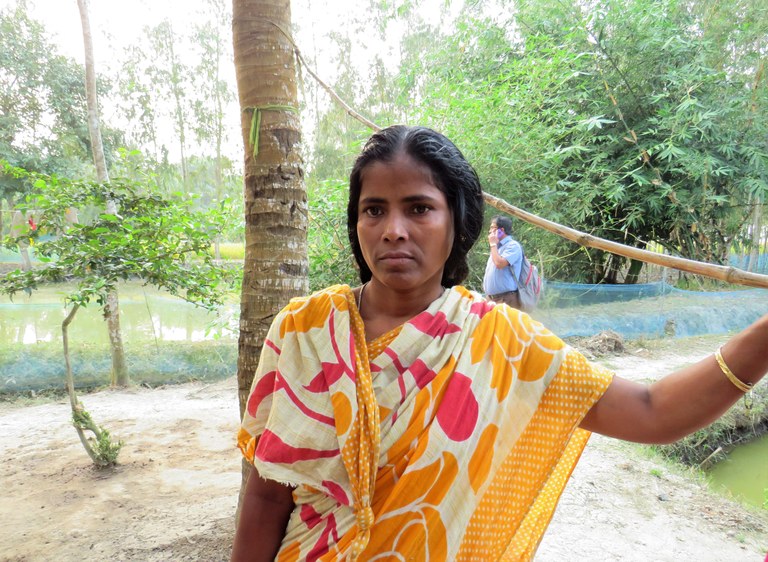 Widow Geeta Mridha continues to rely on forest resources for a living despite the danger of tiger attacks / Credit: Namrata Acharya

“If we see a tiger and a forest official in the reserve forest, we prefer going towards the tiger as the forest officials will seize all our belongings,” said Geeta Mridha, whose husband was killed in a tiger attack while fishing two years ago.

“It is an elaborate expedition,” says Shyamaprasad Mondal, a honey collector.

“Many places, we can’t walk and need to crawl because of fear of tiger attacks. When we are back, our skin is all bruised by bee stings and crawling.”

The group can gather anywhere from 5kg to 40kg of honey on a good day, Mondal says, adding that every honey collector is required to sell at least 25kg of honey at 85 rupees per kilogram to the forest department.

The odds are stacked against those living in the region. There are no alternative livelihoods, apart from fishing and crab hunting in narrow creeks, says Sanjit Kumar Mondal, a school teacher in the small hamlet of Patharpara.

Income from the Mahatma Gandhi National Rural Employment Guarantee Act (MNREGA), a government scheme that insures a minimum of 100 days of employment each year, is erratic and not enough to survive for 365 days, he adds.

The forest department has put up about 43km of nylon fencing in villages adjoining reserve forests in South 24 Parganas. The fences cover almost 90 percent of the area and are aimed at barring tigers from crossing river and reaching villages.  But fencing maintenance is continuously needed as steep erosion sweeps away the nets within a year or two. 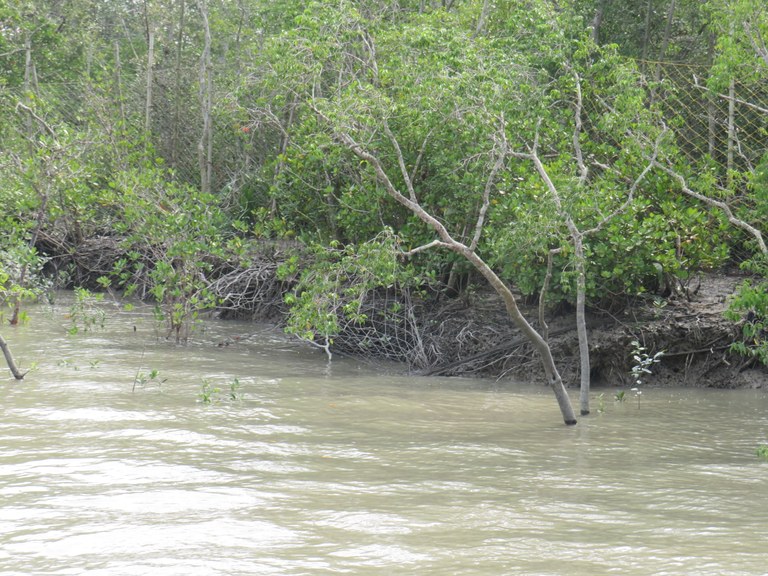 Nylon fencing damaged by erosion in the area around the Sundarban Tiger Reserve / Credit: Namrata Acharya

In the absence of a more official social safety net, thousands of people in the Sundarbans put their unyielding faith in Bono Bibi, a deity that transcends religious lines.

“Before venturing into the forest, we worship Bono Bibi,” says Shyamaprasad Mondal, whose group of honey collectors then disburses widely as they enter the forest.

A mud temple of Bono Bibi in Patharpara is believed to serve as a shield against tigers, despite standing in the middle of “Vidhva Para,” or the Widow’s Locality, named after the wives of tiger victims.

Alapi Mondal lost her husband 15 years ago to a tiger attack. Yet her faith in Bono Bibi remains unaffected. She believes it’s Bono Bibi’s blessing that helped her sustain the hardships of raising two children alone.

“No one can live near forests without the approval of Bono Bibi," she says. "It is from her blessings that I could raise my two children. She will take care of all of us in future also."

A version of this story was originally published in The Business Standard in India on Dec. 15, 2018.