A chug and a whistle to change climate

A chug and a whistle to change climate

In the run up to the UN climate summit in Paris, the Indian government has flagged off a train housing an exhibition about climate change, to raise awareness across the country 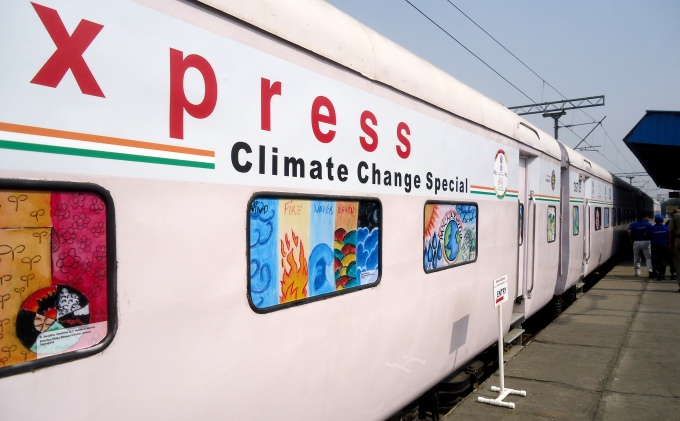 That odd-looking white train with interesting paintings and artwork, standing on a railway platform, is not for passengers or goods. It is a climate exhibition on wheels.

In the run up to the UN climate summit in Paris this December, the Indian government has flagged off the Science Express–Climate Action Special (SECAS) train that is now rumbling along the countryside to generate awareness on global warming and to boost discussions on the issue.

This is the latest version of the 16-coach Science Express that the Department of Science and Technology (DST) launched in 2007. After touring India seven times, it has now been redesigned around the theme of climate change. The budget to run and maintain the train is Rs 15.5 crore.

Launched on October 15, the mobile exhibition will travel 19,800 km across 20 states in the next seven months. It will halt at 64 stations where students and teachers from schools and colleges will be invited to board, view and discuss the issue, which UN Secretary General Ban ki Moon has called the “defining issue of our times”. 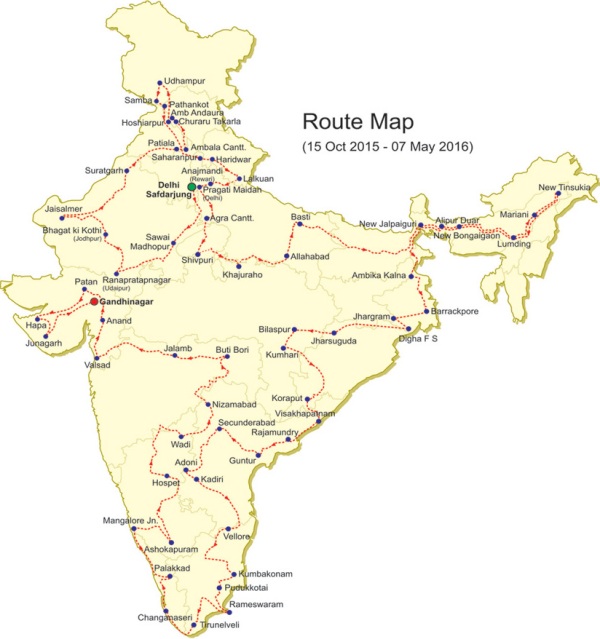 Three of the 16 coaches are powered by solar energy. One solar-powered coach had been rolled out earlier, but it was not air-conditioned. These are, marking another first. The three coaches have 9 kilovolt solar panels on their roofs.

The flag-off was a high-power affair, attended by Harsh Vardhan, Minister for Science and Technology; Prakash Javadekar, Minister of Environment, Forests and Climate Change; and Suresh Prabhu, Minister for Railways.

Vardhan told India Climate Dialogue at the flag-off, “For a long time we had been thinking of doing something very aggressively and actively for solar trains. In this Science Express we have used three coaches to have these solar panels and modules. Whatever is required inside the coach in terms of power has been taken care of by solar energy. So it is an example children can see for themselves. Solar trains are in the offing in future.”

The government is planning live webcasts from the train to the pavilion it is setting up at the Paris summit.

Several organizations have come together to put up the exhibits inside the coaches. The first coach has a large globe with a face painted on, a thermometer sticking out of the mouth and showing that the planet has fever. This coach focuses on understanding the science behind climate change and its underlying reasons. There are interactive models for both children and adults. One helps them understand the concentration of gases like oxygen, nitrogen as compared to greenhouse gases in the atmosphere.

Other coaches focus on different themes like climate change impact, adaptation to climate change, mitigation, action, negotiations, biotechnology and so on.

In the coach exhibiting the impacts of climate change, there is a coral that has bleached because the water became too warm, a three-dimensional model of a polar bear which is losing its home due to melting polar ice and a visual explanation of why disease-carrying mosquitoes are expanding their range as the summers become hotter and longer. In a country beset with malaria, dengue and chikungunya that is expanding into new areas, the last exhibit clearly brings the impact home. 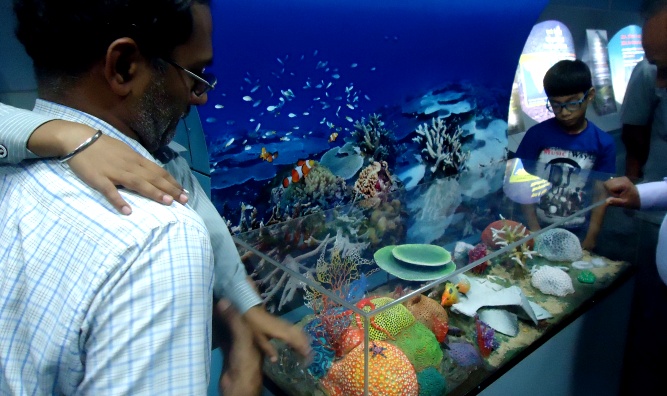 Exhibits in eight of the coaches have been designed by the Centre for Environment Education (CEE); five by DST, Department of Biotechnology and Vikram A. Sarabhai Community Science Centre (VASCSC).

“We have tried to demystify climate change and not present it as a doomsday scenario. There are over 20 knowledge partners that have been roped in to help research data, verify data and use satellite imagery,” said Sharad Gaur, Regional Director, CEE.

A crew of around 50 will travel on the train for the eight months. They will explain the exhibits in 11 languages. When the train moves from one state to another, four or five people speaking the local language will join the team.

The train is equipped with kids’ zone and a Joy of Science Lab where students and teachers can access various web links and material on climate change through WiFi.

In the past, mountain areas in the Himalayas were left out by the Science Express because there were few rail tracks there. This time, whenever the train reaches a station in the foothills, the experts will get into vans and go to areas where the train cannot go. They will concentrate on schools.

Where the train has gone already, the response has been enthusiastic. Over 2,000 people – mainly schoolchildren – visited the exhibits in the first two days, when it was standing at the Safdarjung Railway Station in New Delhi.

Tehrim, a 13-year-old schoolgirl, liked what she saw. “It was very informative. There were new ideas and information on how we can adapt to climate change.” What she liked most were the animal pictures and the exhibits on the need to save water and how to do it.

Ajay Sharma had brought his eight-year-old daughter Vashika. “When my daughter came to know there is an environmental science train, she came here,” the father said. “And she was surprised to see how the climate is changing. One example was how hot it was when she entered the train and the sudden drop in temperature inside. They have explained each step very well.” He thought some of the exhibits were a little difficult for an eight-year-old. “But she understood about dams, canals, irrigation. She got good examples. The paintings outside the train are really nice and they get children to think. The rural kids must see it.”

People who have worked on the exhibits say their toughest job was to make the same exhibition cater to everyone from children to researchers. To help with this, they have trained a team of young people from different backgrounds like biotechnology, science, information technology and so on. These young people have left their jobs to travel on the train for the next eight months, so that they can explain climate change to people.

Minister Harsh Vardhan said, “A visit to the train is entertaining. Through entertainment you are teaching as well. This is essential to help people, so that the world can be a better place to live in.” 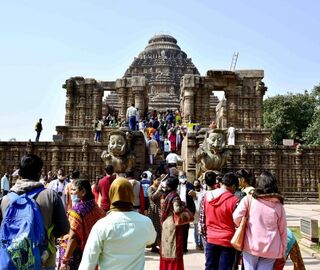