When I first heard about the “Green Road,” or “Yeşil Yol” as it’s called in Turkish, construction had not yet begun on this 1600-mile highway, but the prospect of it cast a looming shadow across Turkey’s rugged eastern Black Sea mountains.

I’d traveled to the region in spring 2015 to report on activists fighting hydropower and mining projects, and I heard the same thing over and over again: if the road was allowed to be built, it would make it even easier for extractive industries to continue ravaging the environment and pushing rural people out of their homes.

“There are so many roads already; if only they would leave the mountains alone,” lamented Nur Neşe Karahan, a bakery owner and indefatigable president of the environmental advocacy group the Green Artvin Association. 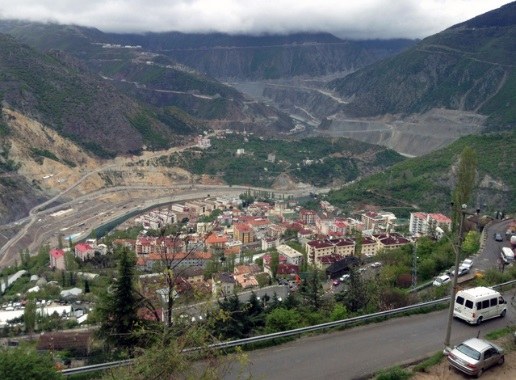 The mountainous landscape around Artvin, in the northeast of Turkey, is already scarred by roads and quarries, as seen in this 2015 image. Photo: Jennifer Hattam

Artvin is one of dozens of high-elevation towns, villages, and seasonal settlements called yayla (alpine pasture) that the Yeşil Yol would connect as it winds its way up from the coastal city of Samsun in the west to the village of Sarp on Turkey’s eastern border with Georgia. But Karahan couldn’t show me where the road would be built because its path was inaccessible. It was April, and the high mountains were covered in snow, as they are for half of each year.

That remoteness has helped protect the area’s wild nature by giving the fragile mountain ecosystem time to “rest” from human impact, Professor Oğuz Kurdoğlu, a member of the Forestry Faculty at Karadeniz Technical University in Trabzon, explained when I returned to the area last year to report on the Yeşil Yol with the support of a grant from the Earth Journalism Network.

“These mountains and forests are very important as a source of water, as habitat for species including bears and wolves, and as a ‘petrol station’ where raptors and other migratory birds can fuel up,” Kurdoğlu said, warning of the erosion, forest loss, habitat fragmentation, and stream pollution the road will create. 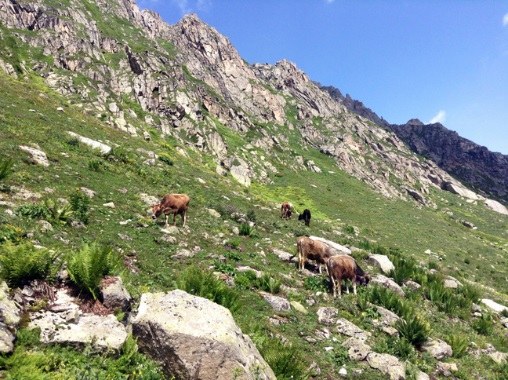 The project also threatens the area’s distinctive yayla culture, built around the seasonal migration of people bringing their livestock into the lush highlands to graze each summer. Locals in their forties and fifties recounted childhoods lived close to the land, and with little connection to the rest of Turkey.

The region has already undergone dramatic changes, most significantly as a result of the establishment of a tea industry at the lower elevations starting in the 1930s and expanding rapidly in the 1970s, and then construction of a highway, completed in 2007, all along the Black Sea coastline.

“The building of the coastal road was the first part of the current push to get people to leave the villages and move into new urban settlements,” said Doğu Eroğlu, a journalist and member of the Ecology Collective Association, an Ankara-based environmental organization. “It also served as a way to get construction machinery into the region. Before, the roads were so narrow, even a minibus could hardly drive on them.” 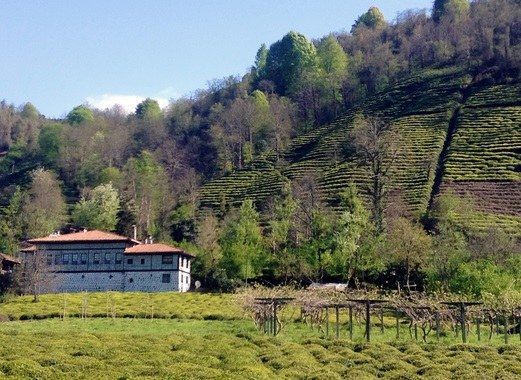 Tea growing next to a traditional stone house in a lower-elevation part of the Black Sea region. Photo: Jennifer Hattam

The Yeşil Yol will squeeze Turkey’s eastern Black Sea region between the existing coastal highway and this new roadway running at an average elevation of 6,500 feet, with dozens of connecting roads planned between them. The Turkish government has touted the potential economic benefits of the project, promising tourism centers with hotels, restaurants, and ski facilities will be built along the route.

“The Yeşil Yol is the way to see the treasures of nature in the Black Sea. No matter how splendid a natural wonder is, if you do not have access to it, then it is idle,” Ekrem Yüce, at the time the president of the Eastern Black Sea Project Regional Development Administration, told the Turkish press in spring 2018.

Many local residents and environmental activists suspect an ulterior motive: to change the legal status of the yayla, long protected as a commons that cannot be bought or sold, in the name of public investment, opening these areas up for development. Even if increasing tourist numbers is the only goal, they fear mass tourism is unsustainable in a region whose most popular and accessible small villages are already clogged with tour buses and blighted by slapdash development and the garbage careless visitors leave behind. A 300-year-old arched stone bridge from the Ottoman era, one of the characteristic architectural features of the region, recently had to be reinforced with metal bars in order to withstand the weight of photo-snapping tour groups. 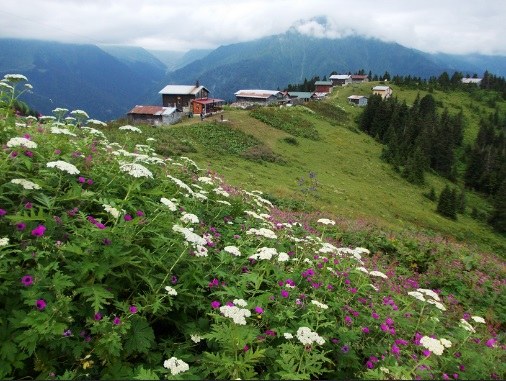 Picturesque Pokut yayla has become a favorite stop for tour groups, to the dismay of many locals. Photo: Jennifer Hattam

Since construction on parts of the Yeşil Yol began in summer 2015, people in the area told me they’ve seen fewer fish in mountain streams; less of the wild herbs they gather to cook with; and more rockfalls and erosion. “People come here for nature, but all they’re going to see is concrete,” said Cemil Aksu, an activist from the Black Sea town of Hopa.

As I talked with local residents last summer, drinking endless cups of the region’s ubiquitous black tea at roadside cafes, we watched a steady parade of construction machinery heading further into the mountains. But the overarching plans for the road, and the development that will follow, are unclear – critics claim purposely so.

Building the Yeşil Yol piece by piece allows the government-connected companies that are constructing it to avoid the scrutiny of overall environmental impact assessments, a strategy often employed in Turkey. It also minimizes public outcry as each village sees only part of the big picture – and the most visible part of that is relatively uncontroversial repair and resurfacing work to existing, lower-elevation routes that will eventually connect to the main road. 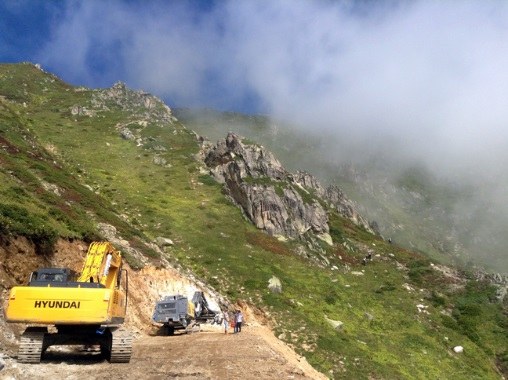 Construction of the Yeşil Yol above Yukarı Kavrun in summer 2018. Photo: Jennifer Hattam

What protests there have been against the project have been squelched in Turkey’s repressive political climate, with demonstrations broken up by riot police and activists intimidated and taken to court in ongoing legal cases. Thirteen people are still on trial for blocking a road in the yayla of Yukarı Kavrun in the summer of 2015, in an unsuccessful attempt to keep the excavators at bay.

As I walked last summer along the gash these machines had created in the hillside, the excavator operators warned me that they would be setting off dynamite in 30 minutes. The blasts shook the ground and reverberated across the mountain valley, parts of which are within the boundaries of Kaçkar Mountain National Park, an area where even loud music is prohibited because of its effects on wildlife. 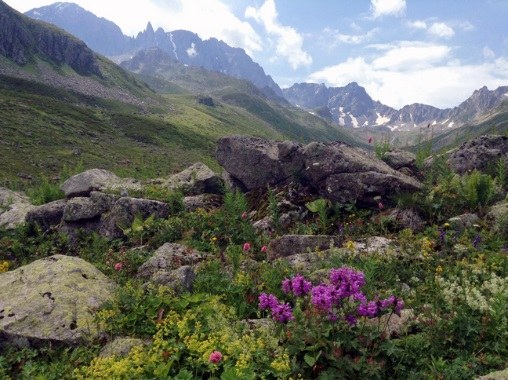 On another day, I hiked up from that same road into flower-blanketed mountain valleys, as yet undisturbed by the nearby construction. I was accompanied by a local, İdris Melek, who regaled me with stories of learning to swim in the area’s mountain lakes and camping in the highlands with his family’s cattle. He plucked edible greens from the earth for me to taste and gathered a rainbow array of blossoms that he would later place in the sun to dry.

Like many others who grew up in this region, Melek now spends the harsh winters in warmer climes – but takes those dried flowers with him to make tea that tastes of the mountains until he can return once again. Now, though, it’s not just highlanders who await the melting of the mountain snow – the excavators, too, are poised at the ready.

Jennifer Hattam is an Istanbul-based freelance journalist who traveled to the eastern Black Sea region of Turkey in summer 2018 with the support of a Biodiversity Story Grant from Internews’ Earth Journalism Network. Contact her to commission a feature or news story on the Yeşil Yol. 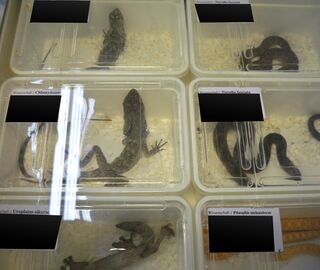 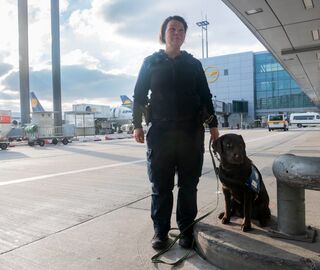