Are corporates coming on board to tackle climate change?

Are corporates coming on board to tackle climate change?

The 2015 climate summit in Paris was considered a qualified success by many. Even then, it was essentially an agreement between governments. To make real change will mean a change of lifestyle, and that will require massive changes in the way we consume.

The business community is an essential part of this change, but so far we have heard little from them in this regard, and much of what we have heard is denial. In the words of Georg Kell, Executive Director of the United Nations Global Compact, the world’s largest voluntary sustainability initiative supported by the corporate sector, “In the past the private sector has by and large defended the status quo and often played a sophisticated game to demonstrate green credentials with marketing campaigns, whilst at the same time using its influence to stop or undermine climate policy action.”

This seems to be changing, as leading players in the private sector come to realise that, for a variety of reasons, business as usual cannot continue. thethirdpole.net spoke to Will Gardner, the CEO of Collectively, a communication and networking platform pushing for good stories and change, backed by a set of large corporate enterprises; as well as Mike Barry, the Head of Sustainability – called Plan A – at Marks & Spencer, on how and why the business community is trying to engage on the issue.

Collectively is a relatively young organisation, born in January 2014, at Davos, Switzerland. “It was born out of a conversation between industry leaders at the World Economic Forum,” says Gardner, “During which leaders of industry agreed that commercial organisations have a responsibility, role and opportunity to address climate change issues. Our aim was to use digital media as a way of collaborating between businesses, NGOs and young people to provide positive stories that show that sustainable ways of living are possible.”

Collectively has partnered with some of the biggest names in the corporate world, from Unilever to Nestle, to Yahoo, to British Telecom. These include members of both the old and the new economies. It seems, though, primarily about “inspiring change”. According to Gardner, Collectively is informing the broader public about “good choices”. He gave the example of Unilever, which in 2007 committed to reduce its carbon output by 25% before 2012. As part of this process Unilever came up with a measuring tool to see how its routines, methods of productions and transport options were producing carbon dioxide. Using that tool, they were able to identify where they could cut down on their emissions, and managed to meet their goal.

The other thing that they found was that the larger part of carbon dioxide emissions was by the use of their products, not the supply chain—or in the production. Gardner says, “Looking at the products, whether detergents or others, that led to more emissions because they were not carbon friendly, Unilever is now designing better products. So not just in their ways of production, but also in the products they manufacture, they account for lower emissions.”

These products have to be attractive. “Currently sustainability is seen as niche activity. Sustainable choices are seen as ‘less attractive’ by consumers. We are trying to change that way of thinking, through inspirational storytelling, by creating interest in more sustainable ways of doing things.”

One of the ways Collectively does it is by partnering with an NGO called Fashion Revolution for the Fashion Takeback campaign. The campaign is based on the logic that the disposal of old clothes generally leads to filling up of landfills somewhere. Instead these clothes can be fixed and restyled, and made fashionable again, thus lowering pollution. On the whole such initiatives have received positive feedback, although critics note that they work best in conditions with high technology capabilities, and that the process is not free—it requires energy and sometimes water and process chemicals.

Gardner mentioned that Collectively is working on a set of other projects, supported by General Electric, Unilever and Google, but the final products are not yet available. Instead he focussed on their new communications scheme, which is actually a product of COP21.

Paris and the missing voice of youth

“In Paris we realised that a lot of people were asking where the millennials were,” Gardner said. “There was no representation by young people, so we came up with the We Got Power campaign. This was a way to help younger people register their voice, so that we can show that the new generation demonstrably wants a better future, with clean energy. We shared this with the Indian audience, and although it is not tailored to India, 25% of our traffic is coming from India.”

By showcasing demand Collectively is trying to obtain commitments from universities, football clubs and other institutions to cut down on carbon emissions. This is somewhat analogous to the INDCs submitted by countries before the Paris summit, in that it is largely voluntary but driven by a response to demand for change from below. According to Gardner, “This can help show that a clean energy future is not just possible, but that many institutions are willingly cooperating to make it happen. It is a way of building hope and positive energy. Over 500 universities in India have already expressed an interest to be part of this initiative.”

While much of Colectively’s work seems focussed on changing the narrative, Marks & Spencer’s Plan A is very much about concrete commitments. Initially launched in 2007, Plan A was a series of 100 commitments on sourcing, recycling, cruelty-free testing and a range of related issues to make M&S a more responsible corporation. Building on the success of most of these commitments, M&S has now launched Plan A 2020, with 100 more commitments. The retailer has put its report on its achievements under Plan A online. On the whole, this has resulted in generating a great deal of positive comment for M&S by sustainability enthusiasts.

When thethirdpole.net asked Mike Barry, the Head of Sustainability of M&S why they thought this was important, and what was in it for M&S, he said it made good business sense. With 500 M&S stores overseas—50 of them in India—and a global supply chain, M&S was deeply affected by global issues such as climate change. He argued that this was something that corporate sector had to get behind.

“Business believes in climate change,” he said “There are five business drivers for corporates to understand. The first is consumer trust. You may not be able to charge a green premium for goods, but if you are environmentally insensitive, you will lose customers over time. Secondly, there are your employees. To retain employees in this day and age, you need to give them a sense of purpose, a feeling that they are making a positive difference, and motivate them. Thirdly, a lower carbon footprint is a good way to monitor efficiency, and M&S has saved millions of pounds in doing both simultaneously. Fourthly, businesses like M&S with global supply chains are badly affected by climate change impacts such as droughts or floods and accompanying social upheavals. It makes sense to invest in stability. Lastly, this is the future of competitiveness. Either you do it now, or you will be left behind. Any business looking to its future has no choice.” 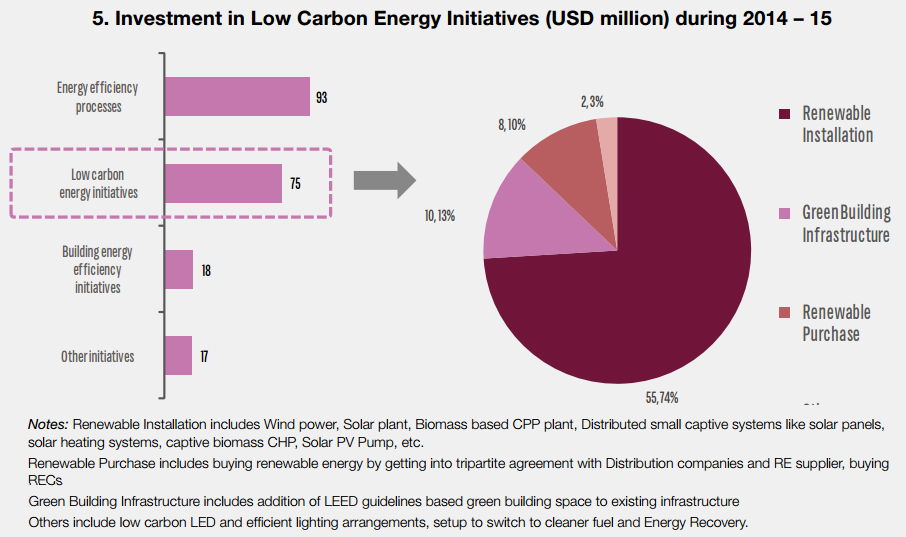 According to Barry, M&S works with 23,000 farmers in Warangal in Telangana to source cotton. “We have helped them grow this cotton using 50% less water and 80% less pesticides. We are working with consumer goods forums so that our sourcing has low deforestation impact, and needs lower refrigeration. We also have a predominantly female workforce in the food and clothing sectors in India and Bangladesh, and we are running financial literacy programmes for them.”

While all of this sounds good, the real challenge for corporations in this regard is the past that they have to deal with, as well as the partnerships of the present. While M&S has gained kudos for its Plan A, it has been criticised for its partnership with British Petroleum, which has had a problematic environmental record. Similarly, for all of Collectively’s effort to change the conversation, its partners include Dow Chemicals which bought out the Union Carbide Corporation—responsible for the Bhopal Gas Tragedy in 1984, arguably the most lethal industrial accident in history.

While it is heartening to hear from the private sector that “business as usual” can no longer be the approach of business, simply because of the problematic past that many businesses have had, and current associations, it will be difficult to win public trust. It can only be done through action, rather than public relations.

COP26: One that failed to deliver what the moment needs
© 2022 Earth Journalism Network All rights reserved.