Argentina needs US$185 billion to mitigate and adapt to climate change from now until 2030, announced the head of the national delegation at COP27.

The request of the Argentine Secretary of Climate Change, Cecilia Nicolini, is within the context of an event where the world talks about money and the figures are generally in the billions of dollars.

"Together for implementation" is the title given to the conference by the Egyptian government, in reference to the fact that it is about finally taking from paper to reality the objectives that the world set in 2015, through the Paris Agreement, for the containment of climate change.

"We want the countries that have contributed the most and continue to contribute to climate change to take responsibility and for the financing to arrive in a timely manner so that the transformations of our economy have an impact on the territory," said Nicolini in dialogue with the Argentine journalists at the summit, which President Alberto Fernández did not attend and the Minister of the Environment, Juan Cabandié, did not even attend.

The secretary presented in Sharm El Sheikh an update of the National Plan for Adaptation and Mitigation to Climate Change, before a group made up of Argentine environmental officials and activists, with 250 measures to achieve a "sustainable, inclusive and innovative Argentina by 2030".

In any case, uncertainty prevails at the conference, where the countries of the so-called Global South try to pressure, without much success, the developed nations to not only fulfill their promise made in 2009 to contribute US$1 billion a year for action climate change, but increase that number.

In a difficult global context in which the international community demands the abandonment of oil and other fossil fuels, the main causes of climate change, Argentina has a difficult time demonstrating that it is a good student. Nicolini herself admitted that Argentina cannot afford to waste the hydrocarbon potential of Vaca Muerta.

“Diversifying our energy matrix is ​​a commitment, but it will not happen overnight. Argentina has the second most important natural gas reserves in the world. Natural gas is essential for Argentine economic development and serves for the transition in the short and medium term. Moving away from fossil fuels is a long-term goal,” she said.

This scenario is not helping Argentina get the financing it needs, since international organizations are determined to promote an acceleration of the energy transition.

The Costa Rican Carlos Manuel Rodríguez, CEO of the Global Environment Facility, one of the main funds in the world for climate financing, was emphatic in this: "The implementation of the Paris Agreement will definitely have a great impact on those activities that have a strong impact on climate change, such as the production and use of oil and gas. It is absolutely irrational that oil and gas companies are making the biggest profits in their history when they bear the biggest responsibility for this existential threat facing humanity, which is climate change. The transition is complicated and challenging. But, of course, there are going to be losers, who are the ones who are polluting and killing people," he said.

The Argentine Ministry of Agriculture was also present in Sharm El Sheikh, headed by Secretary Juan José Bahillo, who arrived with a delegation that raised the banner of the sustainability of national agricultural production, in the face of questions coming from rich countries. It aims, fundamentally, at livestock, due to its high emission of greenhouse gases.

"Argentine agriculture is among the most efficient in the world and we have a decisive role in world food security," said the Undersecretary for Political Coordination of the Ministry of Agriculture, Ariel Martínez.

Martínez assured that Argentina produces 4% of the total food sold in the world, but that it only emits 0.3% of global greenhouse gases. "It means that we have an insignificant impact in terms of climate change, but if we stop producing it would have a very serious impact in terms of food security," he concluded.

This story was produced as part of the 2022 Climate Change Media Partnership, a journalism fellowship organized by Internews' Earth Journalism Network and the Stanley Center for Peace and Security. It was first published in Spanish in El Diario AR on 14 November 2022 and has been lightly edited for length and clarity.

Banner image: At the UN Conference of the Parties (COP27) on climate change in Egypt, the challenge of transforming the promises to reduce emissions and to finance damages and losses to developing countries into action and concrete commitments is discussed. Photo of the Perito Moreno Glacier located in the Argentino Lake in the province of Santa Cruz, in the southwest of Argentina / Credit: Walter Diaz/Telam. 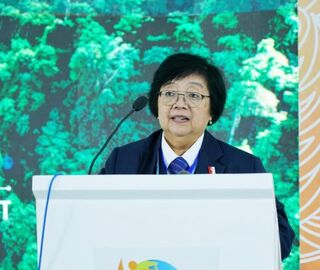