As Bangladesh reels under floods, climate financing in the limelight

As Bangladesh reels under floods, climate financing in the limelight

In August 2017 Bangladesh amended the name of its Ministry of Environment & Forests to include climate change — a visible pledge to emphasise climate action by mobilising funds through the country’s Climate Fiscal Framework (CFF). While the move brought praise for the administration from various climate scientists, donor entities, and environment activists at home and abroad, it also raised a few concerns about CFF and the government’s lack of transparency in disseminating climate funds. 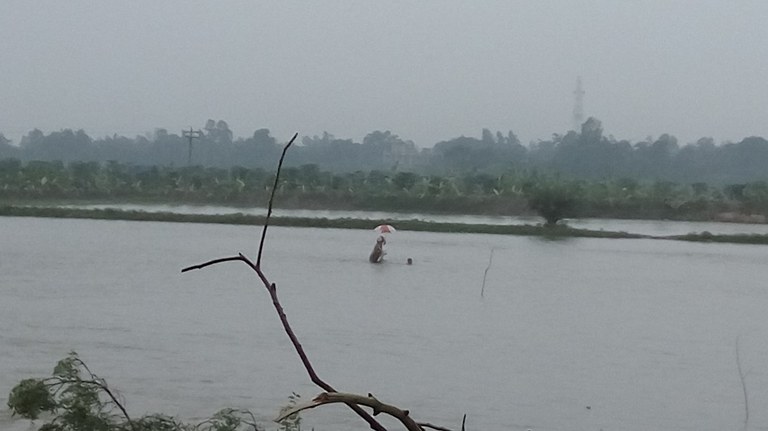 As massive floods have overtaken northern Bangladesh, it’s worth asking if more could have been done to prepare [image by: Asif Hassan]

In a nutshell, climate finance funds an array of preventive and adaptive measures like reforestation, renewable energy, flood relief and the construction of cyclone shelters and dams. CFF essentially accounts for and tracks all these projects from when they are allocated into the budget until their completion, reflecting national prioritisation and shaping the government’s approach to climate finance policy.

Drawing from Bangladesh’s domestic budget and international donors, this year’s climate finance budget closely matched those of previous years, hovering around 5-7% of the country’s total expenditure. For Bangladesh, cash usually flows through one of three pathways: the domestic fund called the Bangladesh Climate Change Trust Fund, which accounts for the greater share of overall climate expenditure; the government’s Annual Development Plan; and NGOs. However, there are significant concerns regarding how the government of Bangladesh allocates and distributes these funds.

From inept distribution structures to corruption — the spectrum of inefficiency is wide. The ongoing floods in the northern parts of the country – Sirajganj, Nilphamari, Panghagarh and surrounding areas – have started to raise some crucial questions.

One of the best defences that vulnerable areas have to hold floodwaters is through the construction of embankments. Such government initiatives are usually awarded to contractors through competitive tenders within relevant ministries, but in most cases, contracts change hands at least twice, which slows down progress by a great deal. In 2013, for example, the government awarded funding to solve waterlogging and revive canal systems in the country’s southwest Satkhira district. Though the award initially went to Niaz Traders, it changed hands three times before Satkhira’s labour leader finally took ownership of the project and finances. Another year went by without any progress until the local community, led by Transparency International, intervened and finished the work.

This weakness in the government’s monitoring and evaluation of such projects often delays or even derails important action against climate impacts. Subsequent reports issued by Transparency International found that most work orders for constructing embankments changed hands multiple times, while delivered projects often went through minimal to non-existent evaluation. This results in weak support structures that are vulnerable to rat burrows and snake holes. Many dams were damaged and run over by strong currents of water recently because of unattended rat burrows and an acute lack of government accountability on flood protection projects in the region.

Over the last week, residents in affected areas received only a few kilograms of chire (flat rice) as relief until new supplies reach them. Many displaced people have constructed primitive tents on highways, with proper shelter structures either unavailable or inadequate to accommodate the growing need. Bangladesh made notable strides to adapt to climate impacts by raising land levels to cope with sea level rise, increasing available shelters, and producing and highly subsidising saline-tolerant crops for agriculture, yet the impacts of climate change are still widely felt with weakened pushback.

Last year, Bangladesh refused GBP 13 million (USD 17.42 million) worth climate fund from UK Aid to be channelled through the World Bank, claiming that World Bank mediation includes extraordinary clauses which would have made it difficult for the government to spend according to their needs. The aid was part of a GBP 75 million (USD 100 million) pledge made to Bangladesh back in 2008 by the UK to provide climate finance through Bangladesh Climate Change Resilience Fund, which has since closed down.

In light of what has happened and what may come for Bangladesh — one of the most climate vulnerable countries in the world — a call for greater climate action is proving necessary. The recent crisis in the north is a clear indication that a strategic increase in the climate finance budget should be considered, as well as a stronger government monitoring and evaluation framework to ensure absolute transparency in handling and distributing funds to relevant stakeholders. Additional investments should also be made to increase public awareness of climate risks. To more effectively fight against climate change impacts, Bangladesh must get rid of structural and institutional corruption and ensure that its people are empowered to hold officials accountable for spending, savings and policy decisions that affect millions. Here, greater public awareness through government and NGO campaigns is the key to success.

To get a detailed idea of the government’s view on these issues, especially on the controversy related to the return of funds to the UK, thethirdpole.net reached out to Rokhsana Tarannum, Deputy Secretary at the Ministry of Environment and Forests.

Rokhsana Tarannum (RT): There was no alternative. The government and the ministry have their own funding channel, Bangladesh Climate Change Trust (BCCT), and we insisted that all funding be channelled through the existing system we have. It is important, both for us and powerful polluters, that Bangladesh is recognised as climate adaptation experts. The ongoing flood is the worst in recent times, primarily because the pollution is getting worse every day; we did well to adapt to climate change on our own, or else there would have been [much] more catastrophe in the previous years. All we wanted was freedom to decide what problems we tackle first and streamline the spending process. The World Bank with its impositions would have made it hard. We all know that they have a history of doing this. We are gaining leverage in the worldwide political system, and it’s time to use the extra bargaining chips we have, and not stay silent when our sovereign decisionmaking ability is not acknowledged.

AH: What is Bangladesh’s strategy in coordinating any foreign aid from the West, if pledged through the World Bank?

RT: I don’t think there can be a definitive answer to questions of possible future strategies. There are many World Bank projects running in Bangladesh even now. While we do proceed with caution since the fall-off back in 2013, we don’t think there is any hostility or any need for developing hostile resistance.

Also, climate change isn’t constantly increasing – it varies [As these were written responses, we did not understand what the respondent meant. To clarify, climate change does not vary, but its impacts may – eds]. Our responses and our needs will vary from time to time as well. Whether we reciprocate the World Bank assistance or not really depends on the circumstances and how we collectively view the collaborative offer made.

AH: The northern floods have already taken more than 100 lives, displaced so many people and risks of heavier flooding and rainfall keep rising. Do you feel Bangladesh’s climate finance is adequate?

RT: Some might say that our climate financing is inadequate. We think the impacts of financing are slower compared to the impacts of pollution. It [may seem like] inadequate financing but in reality we do a lot. We don’t think there is scarcity in cyclone shelters; we are doing all we can to innovate agricultural production and fight rising sea levels. There is significant focus on fighting climate change. But there are other priorities too. With our limited budget every year, we have to make do. [The cyclone shelters are in the south of the country, along the Bay of Bengal coast – eds].

RT: We don’t think there is any correlation. No amount of aid can stop the unnatural, heavy rainfall – all the big polluters have to take up responsibility. It is really great to see even countries like China pledging to help fight climate change. Maybe if we all did our part, Houston would not have been flooded. The South Asian region is just a small flood incident in the bigger scheme of things. It is sad but [there is] nothing we can do about it. I think global politics should recognise us as adaptation experts and look into the work we put into fixing the mess everyone left behind. But to claim returned aid caused the menace [is not] true.

AH: What are the government initiatives undertaken to tackle the ongoing floods?

RT: At this point, we are concentrating on more relief and greater medical response. Innovative strategies to tackle further catastrophes will definitely be in our long-term plans, however it is the short term impacts we are trying to mitigate now. Clearly, this year’s flood defeated all our adaptation measures. We really have to think long and hard to balance our techniques with the global speed of climate change effects.