As Dawei “initial phase” 65% complete, locals left in the dark

As Dawei “initial phase” 65% complete, locals left in the dark

The Dawei Special Economic Zone (DSEZ) is a major industrial project and deep sea port now at an initial phase of construction located in Taninthayri Region, Myanmar. The original plan, led by the Thai construction company Ital-Thai since 2008, was for a US$ 50 billion project that entailed a 250 kilometer square industrial zone. However, by 2012 the project was in deep trouble as it failed to attract investment and was challenged by civil society groups concerned about impact on local livelihoods and the environment, as well as the overall decision-making process around the project. It was reformulated by the governments of Myanmar and Thailand as a Government-to-Government project in a scaled-back form, who also sought support from the Japanese government, and initial construction activities are now underway.

Despite the extensive media attention on the Dawei SEZ, apart from knowing that it is a mega project with regional impacts, many local people still know very little about the details of the project and how it could change their lives.

Story of Mr. Thura the fisherman

In Htein Gyi village, Yebyu township, which is about 2 miles from the proposed Dawei deep sea port, I met Mr. Thura, a 30 year-old fisherman, who was repairing his net. Mr. Thura often goes fishing in the area near the so-called “kilometer zero” of the DSEZ, which is the focal point of the mega project where the big deep sea port is planned to be built.

Mr. Thura said he went fishing every day and he could earn about 5-7000 kyat per day, which is about US$ 4 to US$ 5.5. Mr. Thura said: “I have heard about the Dawei SEZ but I do not understand much about it. No one has directly told me about this project. I only heard the neighbors talking about it. But I know clearly that more and more Thai people are coming in.” 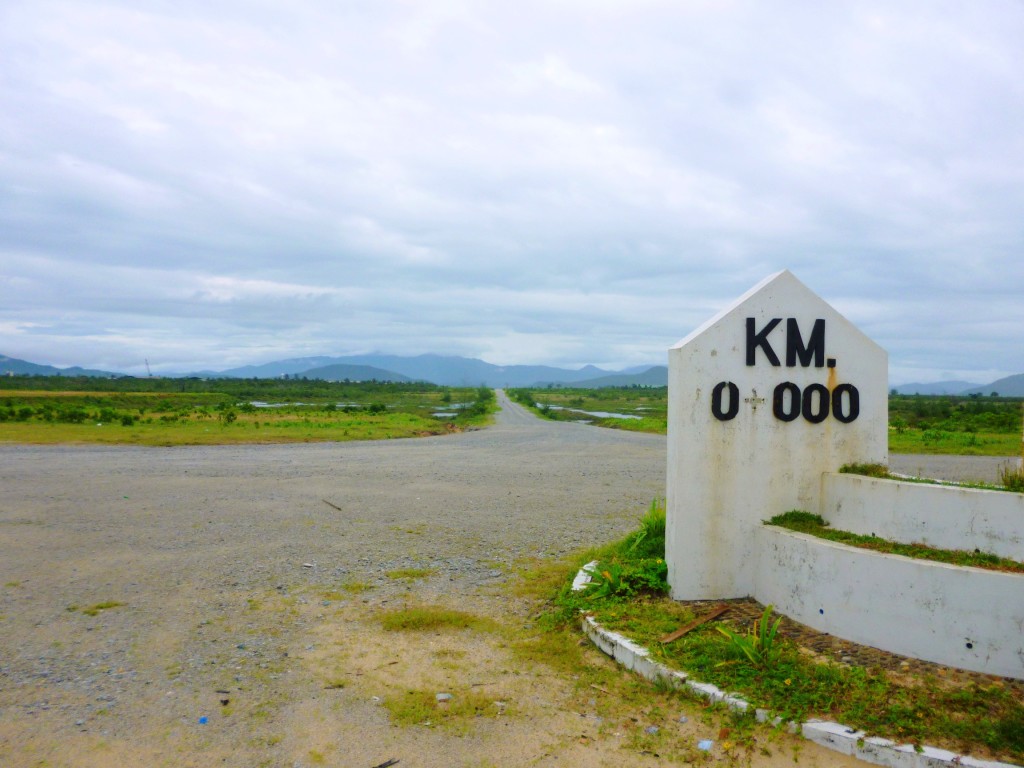 “kilometer zero” at the planned big port site of the Dawei SEZ is considered the “heart” of the project, from where the road will lead to Thailand. (Photo by Mai Lan.)

When asked if he knew whether he would be able to fish in the same spot as now if the big port is built, Mr. Thura said he did not know.

According to Myanmar government plans prepared at the start of the project, Htein Gyi village is amongst 19 villages that will fall inside the project’s industrial zone area. A recent study by the Tavoyan Women’s Union (TWU) showed that local communities in the Htein Gyi area will experience serious impacts to their livelihoods by the DSEZ.1

But, in discussion with some of the villagers there, until now many villagers within this directly impacted area do not know precisely how the project could change their lives.

“The construction of the port will destroy local ecology and change the coast. Some of the coast will be changed completely”, said Mr. Montree Chantawong who works with the Foundation for Ecological Recovery (TERRA) based in Bangkok. He has regularly visited the DSEZ since it was first proposed to study about its potential impacts on the area’s ecology.

“As there would be many big ships visiting to the port, we can be sure there will be much waste, for example garbage and grease, that is discharged or leaked into the sea intentionally or unintentionally” Mr. Montree said. “This will affect the marine ecosystems and fishing will become more difficult, even impossible.”

However, Mr. Thura the fisherman seemed comparatively optimistic about the project. He said, “If I can continue fishing, I will. If not, I will become a worker in the industrial zone. Anything will do.”

It was perhaps not apparent to Mr. Thura, however, that he currently earns more through fishing than he could be working at the DSEZ. He presently earns more than US$150 per month on average, whilst most of the construction workers at the DSEZ project site at present cannot earn this much. A construction worker who I spoke to revealed that the average income of the workers here now is about US$100 per month, for which they have to work 10 hours per day.

In the future, if the DSEZ is built, then perhaps investors who open their factories may increase the worker’s income. But for now, workers here continue to ask for a higher salary that is yet to be granted.

Some have welcomed the project, despite its ambiguity

Many local people in Dawei town are ambiguous in their knowledge of the DSEZ, but are welcoming it despite this.

Mr. Zaw, a taxi driver took me around Dawei town and to visit the local markets. When asked about this project, Mr. Zaw said: “I welcome the project, as I can see infrastructure development. Roads are opening, and the taxi drivers have benefited from that.”

Mr. Zaw also expects that his earnings will improve thanks to guests traveling more frequently on the new paved roads, which are more convenient. However, Mr. Zaw guessed that apart from these positive impacts, the project would have some negative impacts. But what these could be, he did not know.

Inside the local Myoma Market in Dawei town, trading is bustling every day. Traders here say they also feel the change a little, but not too much yet. Mrs. Sandar, a trader in the market, said that there are now more Thai agricultural and consumer goods entering Dawei, and they are cheaper than before. This is due to the “access road” built for the DSEZ from Kanchanaburi Province, Thailand and the opening of the border at Phu Nam Roan.

Most people who I asked in the market said that they had heard about the DSEZ, and most of them hoped that the local economy will grow and their lives will be improved because of it. However, everyone I spoke with also said that actually they were unclear about the details of the DSEZ project.

The planned scale of the DSEZ is certainly big, and is expected to be of strategic importance for connecting industry in the Mekong region to the world. It includes many components, such as a deep seaport, various types of industrial areas, a power plant, and a major road connecting to Thailand. If the project is implemented in accordance with this plan it will definitely change the face of the Dawei area entirely, including the lifestyle, culture and livelihoods of tens of thousands of households.

The small port is currently a construction site. It will have a 100 meter long jetty. (Photo by Mai Lan.)

However, local people affected by the project still lack of information about how the project will change their lives. Visiting some of the project works, such as the planned site for the big port, the small port now under construction, the cement plants, and the Bawah Resettlement site, I could find some information boards, but these were in English.

The fact that local people cannot access enough information about a major project that may change their lives should be of great concern. A report entitled “No Right to Know,” published in April 2012 by the Dawei Project Watch, which is a collective of local people from the DSEZ area, said that local villagers had only been informed by the authorities and company personnel that they would be relocated, but no one has clear information about their relocation, their compensation, or about their future. Neither do they have much knowledge about how the entire project will impact them.

The report writes: “In the case of investment in Dawei (Tavoy) Special Economic Zone, the voices of the local people have been silenced. In the new democratic transformation of Myanmar, the local people still cannot exercise their rights to freedom of expression, freedom to access of information and freedom of assembly.”

Meanwhile, a report by the Tavoyan Women’s Union published in December 2014 shares the results of research from interviews with 60 women chosen randomly from six villages in Htein Gyi tract, where the deep sea port is planned. The report finds that most of the local people are fisher folk and farmers, and argues that they have lived sustainably for generations in this relatively isolated coastal area. However, the report states that these women “…have been given no choice about accepting this multi-billion dollar Thailand-Burma joint venture, which will turn their pristine lands into the largest petrochemical estate in Southeast Asia.”2

The information board at the Bawah resettlement site is completely in English. (Photo by Mai Lan.)

So far, despite many years since the problem was first pointed out, the Right to Access Information for the people in Dawei about the project has not improved significantly. The people directly affected by the DSEZ project, such as Mr. Thura the fisherman, or those indirectly affected such as traders in the market, still do not clearly know what is waiting for them in the very near future. But, they have the right to know.

A representative from the Chamber of Commerce and Industry for Taninthayri Region was initially very open and friendly when he first met our group of journalists. He spoke passionately and enthusiastically about the tourism potential of the Dawei area.

“Dawei has plentiful tourism attractions such as mountains, rivers, the sea and forests, and cultural landscapes with many beautiful temples” he said. “These resources together with the location bordering with Thailand hold great potential for Dawei to become a travel destination for visitors from across the Mekong sub-region.”

However, when asked what he thought about the DSEZ project’s impacts to tourism development in Dawei, he was far more reluctant to answer.

A meeting with Mr. U Khin Maung Cho, Director of the General Administration Department of Taninthayri Region and Chairman of the Supporting Working Body of DSEZ was somewhat more fruitful. He stated that as of the end of August 2015, about 65% of the DSEZ’s “initial project stage” had been completed, which includes a two lane road, a small port and industrial real estate, a small power plant, an initial township, a small water reservoir, a telecommunication landline, and a liquefied natural gas terminal. He said that the first zone of the project – designated Zone A (of Zones A to E) – is approximately seven square kilometers and would be completed by 2018. Regarding compensation for people affected by Zone A, he said that an initial compensation of more than 20 million Kyats or about US$200,000 had been paid.

However, when asked if there is any difficulty while implementing the project, Mr. U Khin Maung Cho said that there was no difficulty. But, this seems to be contradicted by the reports that have been published on the project recently, such as those by the Dawei Project Watch and the Tavoyan Women’s Union. According to the Dawei Development Association’s report, “Voices from the Ground”, published in September 2014, it estimates that 20 to 36 villages (comprising approximately 4,384 to 7,807 households or 22,000 to 43,000 people) would be directly affected by the construction of the Dawei SEZ and related projects.3

The Bawah resettlement site where it is estimated that 341 households or 1,363 people will be relocated during the initial stage of the project. At the time of our visit, no one was living here. (Photo by Mai Lan.)

The need for an informed and open discussion

From talking with local people living within the project area, and also in the Dawei town which is located tens of kilometers away, it is clear that there is limited accurate information available about the project to them, and especially about its impacts. Given the major economic, social, environmental and cultural changes that such a large project would entail, it seems that sharing this information with all who could be affected and then having an open discussion about whether such a project is desirable is absolutely crucial.

Acknowledgement
Ms. Mai Lan appreciates the support of the Mekong Partnership for Environment, who funded the field trip to the DSEZ in August and September, 2015. Villagers’ names in this article have been changed.