As the seas around the Sundarbans erode coasts, the threat of displacement grows

As the seas around the Sundarbans erode coasts, the threat of displacement grows

Over the past five decades, at least four islands in this mangrove forested region spanning India and Bangladesh have completely disappeared 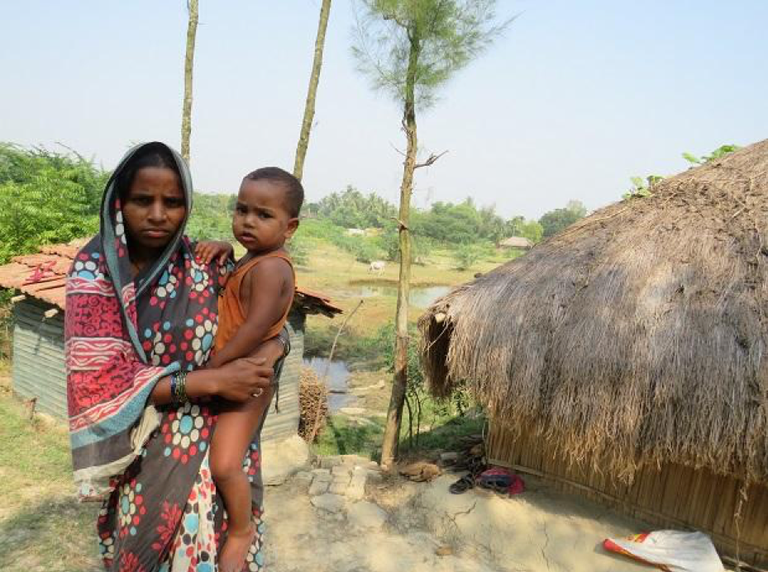 Sabina wasn’t surprised when she woke one morning about three years ago to see her farm disappear. She had been anticipating it as she watched the swelling river wash away her land, then her home at Ghoramara, one of the fastest-sinking islands in the Sundarbans, a sprawling mangrove forest in the Bay of Bengal.

After the deluge, Sabina and her family were forced to move to a mud house in nearby Sagar Island, a larger island in the region where thousands have taken refuge after their homes were washed away. In the absence of any employment opportunities there, Sabina’s husband migrated across India to Kerala to work as a construction worker. Then, last year, Sabina’s husband stopped sending money home and went missing. Sabina now begs for a living.

For people in the Sundarbans, such as Sabina, climate change is not part of the future but a lived reality. And as a steady rise in sea level consumes vast swathes of land in this coastal region spanning India and Bangladesh, residents and non-governmental organizations worry that a refugee crisis in the making could soon reach a tipping point.

According to a 2002 study by Sugata Hazra, a professor at the School of Oceanographic Studies at Jadavpur University, total land mass lost to erosion in the Sundarbans between 1969 and 2001, was nearly 163 square kilometers – an area roughly the size of Washington DC.

Over the past five decades, at least four islands — Lohacara, Bedford, Kabasgadi and Suparibhanga—have completely disappeared, leaving an estimated 6,000 families homeless, according to a study published in 2010 by the World Wildlife Fund (WWF). 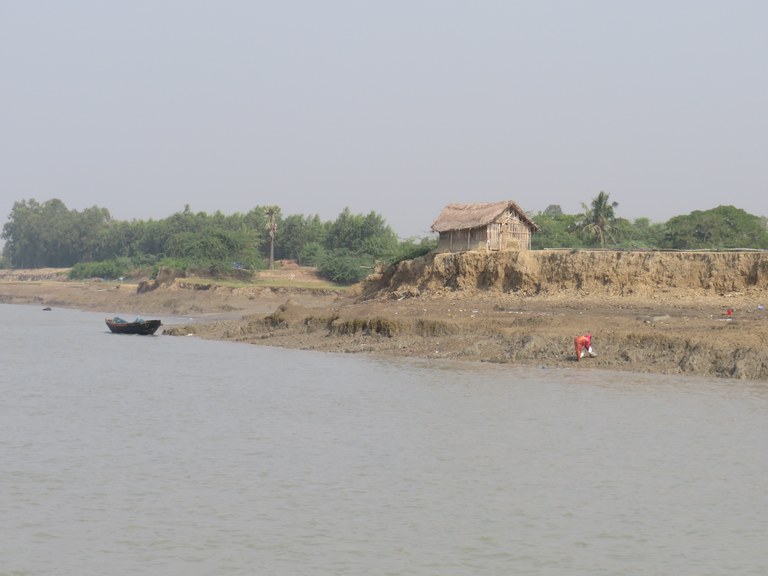 Multiple factors have contributed to this erosion. Following Cyclone Aila, which hit the Sundarbans in 2009, coastal embankments were severely damaged. According to official estimates, Aila damaged nearly 780 km out of a total 3,122 km of embankments. The actual breach, however, was much greater, and erosion has continued.

Ten years later, nearly all of the 54 inhabited islands of the Indian Sundarbans are shielded only intermittently by broken and crumbling walls, while a maze of rivers that pour into the region overflow and wash away land parcels in bits and pieces.

“Most of the embankments in the Sundarbans were built during the British era and steadily they started losing ground from the core. The cost of rebuilding is huge,” says Dipankar Roy, director of the Tagore Society for Rural Development, which is engaged in development work in the region.

Most efforts to reconstruct the embankments end up stopping for lack of funds even before the work is completed, according to a government official at the block development office in Namkhana, a block in the Indian Sundarbans area.

“To add to the woes, the severity of the sea has increased manifold, rendering the completion of work impossible. Land acquisition poses another problem,” said the government official.

The constant clearing of mangroves for human settlements has further exacerbated erosion in recent years, Roy said. Mangroves help keep the soil stitched together, thus preventing erosion and its removal takes away an important protective barrier.

Among the currently inhabited islands of the Indian Sundarbans, Ghoramara faces the most imminent end. Its area shrank from 2,500 hectares about 60 years ago to just 216 hectares at present.

According to a government official, only 35 of the most vulnerable families, or about 150 people who live on the island’s banks, are on a list for possible resettlement. That would leave most of Ghoramara’s nearly 4,200 residents at risk of becoming environmental refugees.

Abhimanyu Mondal, well into his 60s, sits on a rickety wooden chair and checks the daily register of mail at Ghoramara’s Mud Point post office. He has worked at the post office for the last 35 years and never had the luxury of having an electric fan because the island still does not have electricity. Yet a bright red punkha, a manually-fluttered cloth fan suspended to a ceiling, reminds him of the luxuries of a bygone era. A storage trunk, rusted and flaked, once used to store currency, sits abandoned in a corner. 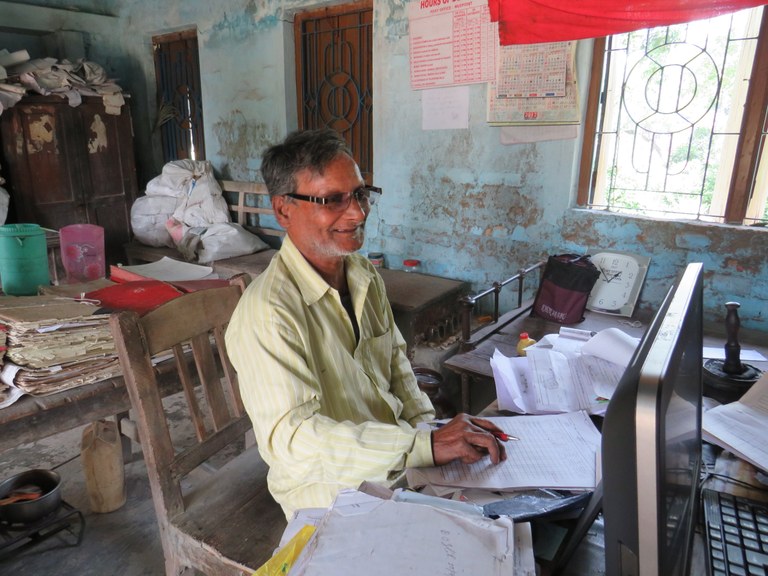 The manual fan and trunk are antiques from the old Mud Point post office, the second telegram office in West Bengal, established in 1853. The old building, along with a watchtower, have long gone under water.

Mondal has seen the sea consume many buildings and homes. He’s seen several families become homeless and once-wealthy farmers reduced to daily laborers over more than three decades. Still, he says he has been never so worried as he is today.

“I have been witnessing Ghoramara sinking for the last 35 years. But for the last five years, the erosion is exceptionally steep. At this pace, the island will vanish in five years,” Mondal predicts.

A Sea Level Affecting Marshes Model, a mathematical model used to assess potential impacts of long-term sea level rise on wetlands and shorelines, suggests that Ghoramara will disappear by 2050, according to Hazra.

Locals fear the end might come sooner. “In the last four to five years, the erosion is so extreme that now it seems that the island may sink in the next three to four years itself,” says Satyajit Meta, an employee at the local village administration office at Ghoramara.

The vertical slicing of land at the shores of Ghoramara is a tip-off to this premonition. Manmade structures in the vicinity are only adding to the problem.

Sanjeev Sagar, the village council head at Ghoramara, says erosion has been particularly steep at the northeast fringes of the island in part due to the diverting of a shipping route between India and Bangladesh. Ships used to travel from the western fringes of Nayachar, an island to the west of Ghoramara, but because the bouldering work to create the new shipping channel was left incomplete, the waves now hit the shores of Ghoramara with heightened force, said Sagar.

Hazra agrees that this new transit channel has precipitated erosion at Ghoramara.

A government official doesn’t offer much hope for a solution.

“The government has given up the efforts to restore the island as the erosion has been massive and no amount of embankment [building] can save Ghoramara from sinking,” the official said. 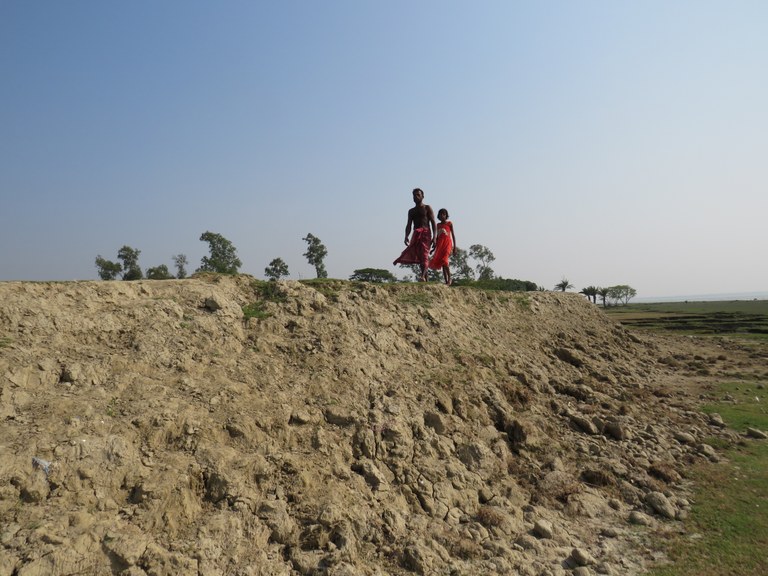 Kanai Bhuyian walks with his daughter along an embankment in Ghoaramara / Credit: Namrata Acharya

According to government data, close to 4,000 people from the lost islands of the Sundarbans have migrated to Sagar since the 1960s under different government resettlement schemes. At the same time, thousands more who did not get any government assistance have also migrated to the island, according to a senior government official.

Between 2001 and 2011, Sagar’s population density increased from 658 people per square km to nearly 750 people per square km, according to the latest Census data. The resettlement at Sagar Island has so far happened in phases, with refugees spread over five colonies. Those who moved to the island in the 1980s were provided by the government with a comprehensive package of land and houses. Others got a piece of land, and some received a matching grant to build homes under various state-run housing schemes.

Many say the compensation hasn’t been adequate.

Subhash Jana, who migrated to Sagar about six years ago received a grant of Rs 80,000 from the government to build a house. But the cost of building the house was close to Rs 1.6 lakh so he took a loan of Rs 80,000 from a moneylender. Every month he pays Rs 4,000 toward the loan. With a daily income not more than Rs 200 as a farm labourer, however, he has been struggling to pay the debt. His house remains half constructed.

“The debt has ruined my life. Most of whatever little I earn goes in paying the debt,” he says. 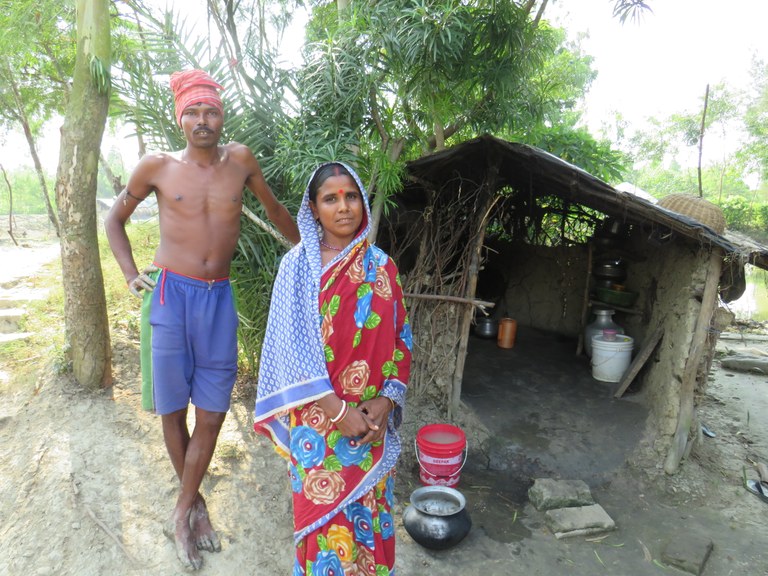 Subhash Jana with his wife at their makeshift house in Sagar Island / Credit: Namrata Acharya

Apart from agriculture, there are also no employment opportunities in the area. And due to rising salinity in the soil from the encroaching sea, even farming income is shrinking, leading to indebtedness and widespread poverty.

“Heavy migration to Sagar is not sustainable as parts of the island itself are facing very steep erosion and salination,” said Abhijit Mitra, a professor in the department of marine science at Calcutta University.

Relocating to Sagar may be the only option for the thousands of people who remain in Ghoramara, yet many who are aware of the conditions there are resisting. For now, they’re still able to farm and fish for food and many own their own land, something they would not be able to do in Sagar. For others, the very tie to the land on which they were born and raised is too great to give up, even as they watch it sink beneath their feet.

Kanai Bhuyian is certain his second house will be submerged any day, just as the first one was a few years ago. But his fighting spirit is intact. “My father fought the waves, now I will fight them,” he says.

An earlier version of this story was published in the Business Standard on May 26, 2019. Reporting for the piece was supported by the Earth Journalism Network's Bay of Bengal Climate Resiliency Initiative.