Bangladesh climate finance mechanism to be introduced in Africa

Bangladesh climate finance mechanism to be introduced in Africa

The Climate Bridge Fund (CBF), aimed at bridging the financial gap between short-term project funding and sustainable provision of services and infrastructure to climate-forced migrants, is an innovative model for tackling climate change in Bangladesh. Brac set up the fund in 2019, with support from the German government through the German state-owned development bank KfW.

CBF supports Bangladeshi NGOs to develop adaptation and risk reduction measures for people who are displaced or are at the risk of being displaced due to the impacts of climate change. This model will soon be rolled out in five African countries: Tanzania, Uganda, Liberia, Sierra Leone and Kenya.

How vulnerable is Bangladesh to climate change?

There has been extreme weather in Bangladesh. We experienced devastating floods last year followed by a severe cyclone. All these events can be attributed to climate change. Just two weeks ago, there were flash floods in Bangladesh's northern district Lalmonirhat. For flash floods to occur in October was unheard of. These are instances of extreme weather that are happening now on a regular basis.

There is also the issue of salinity, which disrupts agricultural production in coastal areas. This is causing extreme poverty and also increasing migration from coastal areas to cities.

We are focusing all our programmes on districts that have been identified by the Bangladesh government as vulnerable to climate change.

How is Brac responding to these vulnerable people?

At the moment, ensuring water security is our first priority. There is a shortage of drinkable water in the coastal areas. By making water available in remote villages, we are trying to provide a solution. Anyone who needs water can get it by harvesting rainwater and filtration.

Our second goal is food security. We are looking at saline-tolerant seed varieties that can be grown in the southern part of the country.

The third goal is to ensure the wellbeing of climate migrants who have landed up in slums in urban areas. Finally, we are working to protect people from disasters in climate-vulnerable districts.

We are not only providing humanitarian support when a disaster happens but are also coming up with a few models of shelters. In districts, we provide low-cost disaster-resilient housing. Currently, most of these projects are on a small scale. However, they should be scaled up.

I was also at COP26 to ensure that Bangladeshi coastal people's voices are heard. In order to make all the conversations and mitigations actually take effect in the long-term and mid-term, we need to keep in mind the fact that people are suffering in the short term and that they will require support and compensation.

Climate-resilient housing can only slow migration if we can secure alternative livelihoods in those areas since people migrate for reasons related to livelihood at the end of the day.

Women in coastal areas seem to be more vulnerable. Is there any special emphasis on women?

All our programmes have women at the centre of the focus. Whether it is low-cost housing that we have done in Khulna, Satkhira, or the ultra-poor graduation programme we are doing in the climate change context in those areas – women are very much at the centre.

Does Brac have any mitigation measures?

We are trying to change ourselves within the organisation as a first step. We have banned single-use plastics. Our Brac centre understands the need to reduce carbon footprint. Though it's done on a small scale by using energy-efficient lights and electric cars, we are making some changes in this regard. We are now working with Unilever and a lot of other plastic-producing companies, such as Pran, Coke and Pepsi, on how we can solve the plastic waste problem in Bangladesh to ensure that plastic is actually recycled in a meaningful way. Almost all the cities are facing problems with waste management in general – mostly plastic waste.

What are Brac's strategies on coping with the challenges?

We are very worried about this. Infrastructure is one concern. The government has plans for it, and it should be taken care of by the government. Developing models for livelihood, water, and remote areas is why we're going there. However, mobilising resources has become a challenge. We are trying to mobilise resources as much as possible because needs in these areas are extremely high.

How does Brac collaborate with the government?

At both the policy level and the plan that has been developed, we work closely with the government. We have given our support.  The government alone won't be able to resolve this issue at some point, so civil society actors must come forward.

What did Brac expect from COP26?

It was my expectation that all the countries would agree and that the agreement relating to adaptation would be met.

The developed countries promised $100 billion for the most vulnerable countries, but the promise has not been met, and the money also won't be enough for all those countries.

Brac has established the CBF, which is a unique initiative in climate financing. What is your dream through this endeavour, and how can the development partners help you accomplish it?

This is a first of its kind initiative where civil society has set up a trust fund with the support of the donors. Bangladesh has a trust fund that is managed by the government, which is also complementary to that. Many local organisations are encouraged to apply because this is the model that enables anyone working in these areas to apply and at the same time establish some innovative models that can be funded.

In contrast to the other international approach, the Green Climate Fund which has a long-term application process for smaller organisations, this is our way of making it easier for the local organisations to apply for the fund.

The results have been good in Bangladesh so far. We want to replicate this model in Africa as well. Our next step is to talk to a few partners who are interested in taking this model to Africa, specifically in five countries, Tanzania, Uganda, Liberia, Sierra Leone and Kenya, with an estimated 100 million dollars. That's the goal we can achieve with the same model.

What are the new initiatives in the face of climate change?

As part of education, we are teaching students how to adapt to climate change. We need to develop these kinds of coping mechanisms in all our programmes. We have recently introduced crop insurance for potatoes. We want to do it for other types of crops as well.

What is Brac's response to national and global climate action policies?

We organised a community-based adaptation conference in June this year. Every other organisation in Bangladesh can play an important role globally. We are not just talking about the challenges of adaptation, but also about coming forth with unique solutions. In the past, we've done this with unique solutions that can be replicated outside. We are in a very strong position here.

How can Brac benefit the global community by sharing Bangladesh's experience?

We are taking our models to the outside world and talking to other partners. If we can launch a climate bridge fund in Africa, that would also be a big win for some of these lesson plans vis-a-vis African countries.

What are Brac's thoughts regarding climate justice?

I think it is very important to make it clear that the Bangladeshi people's voice goes out to other vulnerable countries, and that the mobilisation of resources is not a charity or aid effort.

Financing by developed countries on loss and damage is our right. There is a lot of talk about climate change worldwide, but we don't see that in Bangladesh. Young Bangladeshis need to understand that it is also our failure as a civil society in communicating how climate change will impact Bangladesh.

It can impact every single person in Bangladesh. Our social stability and prosperity will be threatened.  They need to understand this, they need to mobilise, and their voices need to be translated in the global space as well. 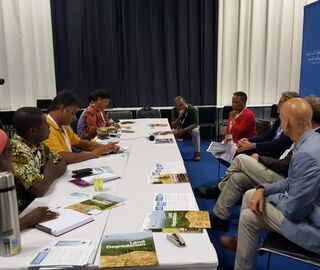