Livestock, the responsible of  15% of global carbon dioxide emission is being neglected in climate talks, says report from Hongqiao Liu.

According to a report released by Chatham House a week ahead the Paris negotiation, livestock sector releases more greenhouse gas globally than all cars, trains, boats and planes add up together.

Jo Leinen, a member of the European Parliament, said “UNFCCC is totally blind-eyed on the sector” and it’s “unacceptable” that such an important issue has not been taken into climate negotiation as it deserved.

Studies from Chatham House disclosed an “inconvenient truth”: current climate change mitigation actions left out the livestock sector, which is not only the second largest global greenhouse gas emitter, but also a water intensive sector.

Figures from United Nations Food and Agriculture Organization (FAO) says livestock sector is responsible for approximately 15% of global greenhouse emission (GHGs). In comparison, global transport only makes up 14% of global GHGs, according to estimation from Intergovernmental Panel on Climate Change (IPCC).

There is a huge gap in public awareness as well as government policies, according to Antony Froggart, senior research fellow from Chatham House, who co-authored the report.

Though the emission contribution from the two sectors are very close, online survey conducted by Chatham House shows general public has very limited knowledge and awareness on the climate impacts from their meals. As to emission and climate change, the general public showed twice much the concern on transport emissions as a key driver of global warming than livestock.

“We heard about the huge economic loss caused by fossil-fuel emission all the time, but nothing about meat here in Paris.” Professor Johan Rockström, who leads the Stockholm Resilience Centre said it’s disappointing to see that even for EU, who holds the most aggressive political ambition on climate change, failed to raise the issue in COP21.

According to him, “green carbons” like methane, nitrous oxide from agriculture is neglected in current climate emission reduction actions. Although it’s clear in science area, polices on such short-lived greenhouse are lacking.

According to the study, the climate impacts from livestock sector goes far beyond greenhouse gas emission. To raise farm animals, vast agricultural lands has been changed to support the production of animal products.

The sector has been the major driver of land use change over the last 50 years, accounting for 65% of land use change globally. In countries like Brazil, rainforests are changed into farmlands to grow more crops in order to feed the growing demand from livestock production, which results to habitats loss, species extinction and further damage to biodiversity.

Over consumption of meat brings problems on health. A month ago, the International Agency for Research on Cancer (IARC), an independent cancer agency under the auspices of WHO, classified the consumption of red meat as Group 2A carcinogens and processed meat was identified as Group 1 carcinogens. The organization said, strong evidence showed that each 50g of processed meat in diet per day would increase 18% of the risk for colorectal caner.

Overconsumption, including meat, can also cause obesity and non-communicable diseases like heart disease. Diabetes, which can result from obesity has cast huge burden to the public health system worldwide. In UK alone, it takes 10% of the national health system budget.

Already, global diet per capita meat consumption is above healthy level suggested by WHO. Citizens in the US consumes three times of meat as experts deem healthy, while Chinese consumes 1.5 times of the healthy level – still too much.

“Our current diet structure based on animal products is simply not sustainable. The sector has been a principal driver of deforestation, habitat destruction and species loss, let alone its inefficiency as to scarce land and fresh water”, said Antony Froggart.

Despite overlooked by policy makers so far, the sector has the great potential to contribute global carbon emission reduction.

Chatham House estimates that a global shift to healthier diet would not only do good to health – less diabetes, less cancer and less heart disease, but will also cut carbon emissions by 6 billion tonnes by 2050.

If those who over-consumed meat could take a part in the shift by cutting the meat consumption in their plates, together the livestock sector would save more than a quarter of what is needed to close the emission gap and keep global warming below 2 degrees. That’s significant enough to cut down the billions of “black hole” on climate finance.

On the contrary, if meat and dairy consumption continue to rise at current rates, agriculture sector will soak up the majority of remaining emission budget by 2050, leaving 3GtCO2 per year for all other sectors, said the report.

In EU, where account for approximately 7% of the world’s population, citizens there are responsible for 16% of the worlds meat consumption. Though large portion of meat product in supermarkets are imported from other counties, within the EU, animal agriculture accounts for 12.8% of greenhouse gas emission, according to Alexandra Clark from Humane Society International.

Sadly, countries around the world failed to identify the grand mitigation opportunity. In current INDCs submitted by countries, the sector is largely referred to as a sector that needs climate adaptation rather than mitigation. After examining 120 INDCs, researchers from Chatham House found none of these countries consider diet change as a means to climate mitigation.

Only 21 countries – all developing countries including major food and diary export countries like Brazil, Mongolia and Namibia, outlined plans that referred directly to reducing emissions from the livestock sector.

Such mismatched policies must be adjusted. Otherwise, even countries succeed to drop fossil emission to zero, livestock sector could still drive global warming exceed the 2-degree target, warns the report.

Yet feeding its 1.3 billion population is always a challenge. To meet the meat consumption China has been rapidly developing livestock sector. Meat import also grows fast. Already, the country raises half of the farmed pigs in the world. In order to meet the feed demand, China has become a major import country in terms of soybeans and has been rapidly developing industrial farming.

“China has been looking for the most efficient food production system. So often it only looks at the perceived positive side of factory farming but we are happy to see that the country has started to look into the side impacts.” Said Wanqing Zhou from New York based non-profit Brighter Green.

However, Antony Froggart holds an optimism in China as the traditional diet is heavy in vegetables and grains with relatively less meat than the West. With previous government practice on addressing balanced diet, he said China’s meat consumption is likely to peak at lower levels than in the West. According to him, if everyone ate a more ‘Chinese’ diet we might be able to feed the world sustainably.

Back to 2007, China upgraded its national dietary guidelines, which suggests 50-75g livestock and poultry meat consumption with 300-500g vegetable and 200-400g fruit per day per person.

Though livestock sector is not particularly mentioned in China’s INDC, the country has showed ambitious to moving towards low-carbon agriculture. By 2020, China aims to establish and improve agriculture discharge registration system, reduce methane and nitrous oxide emission from paddy and farmland.

Jian Yi, a vegan and independent filmmaker based in Beijing, made a short documentary, What's For Dinner, trying to capture China's rapid growth of industralized meat production and consumption and its impact on public health, animal welfare, the environment and food security.

"It's not realistic for everyone to become a vegetarian in the near future, but we can start from reducing meat consumption and rethinking our obsessions to animal protein," says Jian Yi. 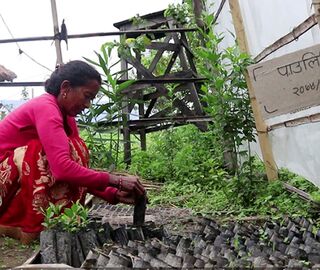 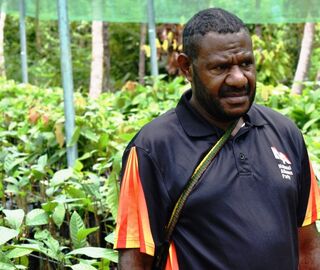