The search for the cause of the coronavirus outbreak has ignited fresh discussions about the illegal wildlife trade and its implications.

The pangolin, a highly endangered scaly anteater said to be the world’s most trafficked mammal, has recently grabbed headlines as a potential source of the new coronavirus, or COVID-19. The evidence so far is inconclusive, and many researchers have warned against making too much of it, but the search for the cause of the outbreak has ignited fresh discussions about the illegal wildlife trade and its implications.

The virus, which was first detected in China, has since spread to more than 25 countries with more than 1,381 deaths recorded in mainland China and 49,053 confirmed cases globally as of February 14, according to data from the World Health Organization (WHO).

This strain of coronavirus is thought to have emerged from a busy seafood market in Wuhan, China, where live wildlife had at times been sold. It is not clear if pangolins were on sale at the market prior to the outbreak.

On February 7 researchers at South China Agricultural University issued a public statement on the university’s website saying that after testing more than 1,000 samples they had found the genome sequence of the virus in pangolins to be 99% identical to that from the infected people.

“The latest discovery will be of great significance for the prevention and control of the origin of the new coronavirus,” it added.

But Dr. Sabine Schoppe, director of the Palawan Pangolin Conservation program of Katala Foundation, Inc. based in the Philippines, has cautioned against jumping to conclusions based on the study, which has not gone through the usual scientific peer-review process.

“There is no reason … to link the virus outbreak to pangolins,” said Dr. Sabine, who is also a member of the Species Survival Commission Pangolin Specialist Group at the International Union for Conservation of Nature (IUCN).

The main threat the pangolin faces is the illegal wildlife trade, with China being a main export market and consumer of wildlife goods, Dr. Sabine said. But the SARS outbreak, and now the outbreak of the new coronavirus, is putting the wildlife trade into a new light. Stopping the trade and consumption of wildlife could reduce the threat of future disease outbreaks now and in the future, she added.

“Experts in virology agree that the origin of the Coronavirus is most certainly a bat. But under conditions as they exist in wet markets, the infection could easily involve other species,” Dr. Sabine said. (If pangolins are found to be involved in its spread, it would likely be as an intermediate host.)

There are eight species of pangolin found throughout Africa and Asia. Tens of thousands of the animals are poached every year for their scales, which are used in traditional medicine, and their meat, which is consumed as food. There is relatively little data on the pangolin’s global population, but based on data gathered by the IUCN’s Species Survival Commission Pangolin Specialist Group, more than 895,000 pangolins were trafficked globally between 2000 and 2019, mostly to East and Southeast Asia.

They are now listed as either endangered or critically endangered by the IUCN, and in 2016, the UN Convention on International Trade in Endangered Species of Wild Fauna and Flora (CITES), a global treaty that aims to regulate trade in the world’s species, banned its international commercial trade in wildlife.

On January 26, China’s news agency Xinhua, reported that the government had issued a temporary ban on the domestic transport and sale of all wild animals following the emergence of the coronavirus.

Dr. Sabine believes that if the ban were to become permanent it could help with the recovery of pangolins and other commonly traded wildlife.

Meanwhile, the Association of Southeast Asian Nations’ (ASEAN) Centre for Biodiversity (ACB) has drawn attention to the need for intensified and focused campaigns to protect wildlife and safeguard public health in the ASEAN region.

As parties to CITES, the ASEAN Member States (AMS) have been working together to regulate trade of the world’s species and provide varying degrees of protection.

She said the ACB would welcome rigorous measures on the part of the Chinese government to enforce its temporary ban on the illegal wildlife trade.

“This move, along with its ongoing efforts to contain the virus, will have a significant impact on reducing the animal-to-human transmission of infectious diseases,” Lim explained. “Stopping the poaching of pangolins, which is a problem as well in the ASEAN member states, entails the reduction of the demand for it.”

February 15 marks World Pangolin Day, and on its eve Lim stressed the need to raise public awareness of the important role pangolins play in global ecosystems and the need to crack down on the criminal syndicates helping drive the illegal wildlife trade.

“As the world faces threats of emerging diseases linked to increasing human interactions with wildlife, we need to seriously pay attention to proactive and long-term efforts to protect wildlife species and their habitats,” Lim said in a statement. “This calls for greater collaboration at the regional and global levels and a holistic and long-term approach that involves the participation of members of the community. Efforts to promote sustainable livelihoods will help reduce the communities’ reliance on poaching, overharvesting and illegal trade of wildlife and their products.”

Geneva
Inside the global conservation organization infiltrated by trophy hunters 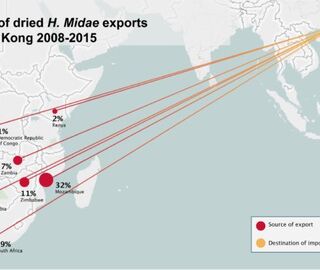