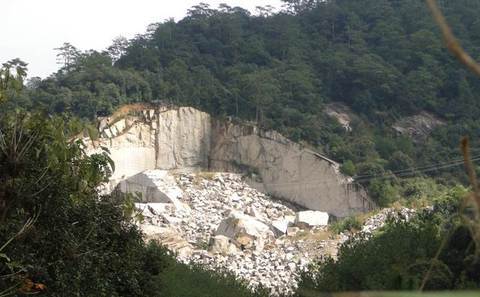 Owners of a illegal quarry in Fujian province were hit with 1.4 million yuan of penalties for illegally taking land and pollution, the first successful public interest case taken under China's new environmental law (Image by Friends of Nature)

Late last month a court in China’s south-eastern Fujian province ruled in favour of environmental groups that took a lawsuit against a quarry company for pollution near the city of Nanping.

The case was originally submitted on January 1, the same day a new environmental law came into effect, and was the first public interest case to heard under the code, which aims to give the authorities sharper teeth in enforcing anti-pollution measures.

Although few environmental NGOs have been able to have cases heard, the new environmental law has shown that it’s possible for them to get favourable rulings from judges, said Wang Canfa, a professor at the China University of Politics and Law.

The defendants in the case illegally mined stone and dumped waste material between 2008 and 2011. Despite orders from the Ministry of Land and Resources to halt operations, the quarry's owners continued to build roads and damage local forests.

In 2014, a Fujian court found three defendants guilty of the illegal appropriation of agricultural land and sentenced them to jail. Subsequently, Friends of Nature and Fujian Green Home Environmental-Friendly Centre tabled a lawsuit asking the courts to order the plaintiffs to remove quarrying equipment and waste material, and to restore the forest to its original state.

The court ordered the quarry company to pay fines totalling 1.46 million yuan (US$230,000) in compensation for 'loss of environmental benefits' and legal costs. The defendants were also given five months to restore the environment at the site, or a further 1.1 million yuan will be levied in fines.

Wang Canfa says the court ruling could set precedents for future cases. Firstly, the presiding judge demanded environmental restoration from polluters, whereas penalties under previous laws punished the act of pollution itself.

Secondly, it is also noteworthy that the Nanping court deemed the NGOs as suitable to bring the case before the Supreme Court interpretation of the new environmental has been issued.

The law requires NGOs bringing a case to have been registered for five years, but organisations often re-register due to changes in name or management. Waiving this technicality will allow many more groups to bring cases, legal experts say.

Ge Feng, director of the legal and policy department at Friends of Nature, expressed satisfaction with the result, particularly the size of the fines. “In the past, fines and awards (to plaintiffs) weren’t that high. This is important for cash-strapped NGOs.”

The compensation for the loss of environmental benefits was also a new idea, which the court backed. Ge thinks those bringing other cases in the future will gain valuable insight from the Fujian quarry case. Evidence gathered by local prosecutors for the 2014 trial was vital to Friends of Nature’s lawsuit.

Different organisations are facing different issues in bringing similar cases. Friends of Nature has submitted six this year, although three cases were rejected. However, Ge Feng feels it is no longer as difficult to get a case heard as it had been previously. Hu Yulai, an environmental public interest lawyer in Beijing, also says cases he is handling are proceeding smoothly.

However, the China Biodiversity Conservation and Green Development Foundation is finding the process much more difficult, with only a handful of 21 cases the organisation submitted this year being heard.

The main problems, said Ma Yong, the secretary of the foundation, are the capability of local courts to hear such cases, and judicial independence.

“The courts are mostly taking a cautious approach. They are worried that cases will cause trouble for the local government, and as they haven’t heard public interest cases before, they are unsure how to handle them or how to reach a verdict,” Ma said.

Environmental courts in economically-developed areas are better prospects, but getting cases heard in central and western China is difficult, Ma added. In August his foundation successfully submitted a case over the ConocoPhilips oil leak in Tianjin, but most of the unsuccessful cases it has taken were in relatively remote Inner Mongolia and Ningxia, including eight lawsuits related to pollution in the Tengger Desert.

Friends of Nature is no longer focused on getting the cases heard – and is instead working on gathering evidence for the hearings. But organisations working in western and central China may need to spend more time just to get their day in court.