The Ministry of Health says climate change is partly to blame for the early outbreak of dengue across Laos this year, with abnormal rainfall ahead of rainy season creating breeding grounds for the mosquitos that carry the disease.

Some days are rainy, some are sunny, the perfect environment for dengue mosquitoes to breed and thrive, said Deputy Director General of the ministry’s Communicable Disease Control Department (CDCD), Dr. Sibounhom Archkhawongs.

As of June 21, 7,922 people had been diagnosed with dengue fever and 22 have died, including an 11-year-old girl, according to the CDCD. Six deaths were reported in the capital, Vientiane; six in Savannakhet; five in Champassak; two in Saravan; two in Khammuan and one in Borikhamxay province.

The number of infections in just the first six months of the year is on par to top those recorded in 2017, a year that saw the highest number of dengue deaths since 2013, according to the CDCD.

The number of dengue patient was abnormally high in 2013 due to the spread of a serotype, or strain of the virus, uncommon in the country. While people who contract dengue and recover have immunity to that particular strain, the appearance of newer strains increases the possibility of an outbreak.

The disease has sickened considerably more people this year than last, despite efforts by the Ministry of Health to control it. That’s largely due to the lack of cooperation by some communities to wipe out dengue mosquito breeding grounds. But officials are also pointing to the possible impacts of climate change.

What worries them currently is that so many infections have been recorded even before the worst time of year for the virus. Dengue season typically begins around June when the rainy season arrives and ends in October.

It thrives during these months as rainwater pools and stagnates in receptacles, such as old tins, tires and coconut shells, creating the perfect breeding grounds for mosquitoes.

Incidents of dengue have grown dramatically in recent decades, according to the World Health Organisation (WHO). That’s partly to do with better reporting on infections, but a study published earlier this year in the journal PLOS found that warming temperatures could newly expose much of the world’s population to mosquito-borne diseases such as dengue, driving up the rate of infection in the future.

According to WHO, extreme heatwaves might occur “as often as every two years in the second half of the 21st century” as a result of global warming. And when it comes to dengue, global warming would increase both the length of the transmission season and the number of geographical areas where the climate is suitable for dengue.

In Laos, the weather during the same period last year was much cooler, with low temperatures lasting from January to April followed by a short period of hot weather with little rain.

Those conditions are not conducive to the growth of dengue or malaria, another mosquito-borne disease, said Director of Vientiane Health Department, Dr Xayphone Nanthaphone.

This year, in contrast, the cold season was short, with summer arriving early in February. Some days, the temperatures have remained high even with rainfall. Such weather is perfect for mosquitoes to breed, Dr. Xayphone said.

Dr. Sibounhom believes that climate change will not only allow the dengue mosquito to flourish but also increase the number of mosquitos carrying the malaria virus. “It is necessary to encourage the public to have full cooperation to wipe out the breeding sources of dengue mosquitoes if we want to cut the number of illness and deaths, caused by dengue fever,” he said.

Dr. Xayphone called the number of infections this year “unusually high” when compared with the same period in 2018 when the Communicable Disease Control Department recorded 1,033 dengue infections and just two deaths. Epidemiologists in Vientiane are closely monitoring the situation, with the possibility for infections increasing now that rainy season has begun, Dr. Xayphone said. The health department is also working to raise awareness about prevention.

A negative forecast will add to the challenges

The Head of the Weather Forecasting and Warning Division of the Ministry of Natural Resources and Environment, Mr. Bounteum Sysouphanthavong, said that this year Laos may experience an El Nino-type phenomena that could bring temperatures of more than 30 degree Celsius for many months marked with interim rainfall.

He also predicted that at least two to three storms will hit Laos in the remainder of the year, causing heavy rains throughout the country. Changes in weather patterns would increase the threat of water and vector-borne diseases (those carried by animals) in the rest of this year and in the years to come. 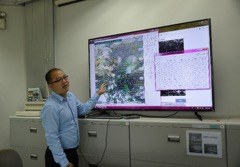 Bounteum Sysouphanthavong, head of the Weather Forecasting and Warning Division of the Ministry of Natural Resources and Environment / Credit: Xayxana Leukai

In addition to rain, high temperatures shorten the time the virus needs to incubate inside mosquitos before they become infectious, so mosquitos don’t need to live as long to spread it.

While the forecast issued by the weather division doesn’t bode well for the dengue threat, knowing the outlook in advice has helped health authorities to plan dengue prevention, said Dr. Xayphone, whose department is in close contact with staff at the weather agency.

The health ministry is also referring to weather forecasts in issuing its public health alerts. Earlier this year, for example, the minister warned citizens to take precautionary measures on dengue control following a slight rise in temperatures.

Communities are quick to act

Every week village health authorities discuss progress made to check the spread of dengue, and residents are diligently following prevention measures by keeping areas clean to stop mosquitos from breeding.

“We believe that destroying egg-laying sources would reduce the population of mosquitoes. This means if there is no larva, there will be no dengue mosquitoes,” Ms. Khambualone said.

The Ministry of Health has encouraged citizens to close and seal all containers and empty all water vessels – both favorable breeding places for dengue mosquitoes. It also advised people to put small guppy fish (which eat mosquito larvae) into water containers and keep the exteriors of their houses clean and clear of bushes and other debris.

To cope with a potential outbreak, the ministry has advised health officials in Vientiane and other provinces to put plans in place for treatment, patient management and community health education.

It’s also encouraging health officials across the country to hold forums to raise awareness about the disease and how to prevent its spread. It should be made clear that disease prevention is the duty of everyone, said Dr. Sibounhom.

“If every community takes part in disease prevention, we would have a low risk of dengue and malaria infections,” he said.

Treating the disease is just one step

“This is a warning signal, and this should encourage doctors and nurses to work harder to deal with a possible outbreak of dengue this year,” she said.

“We are preparing to upgrade [the] dengue treatment skills of doctors and nurses to make sure all patients are saved when they receive treatment,” she added.

Saiphin Inthisane, a 10-year-old girl from Dongphonlao village in Vientiane, is one such patient. She fell ill early in May with a headache. After two days her parents took her to the hospital where she underwent a blood test that diagnosed her as having dengue fever.

Doctors advised her to stay overnight for treatment. She stayed for five days before she fully covered. “I had a bad headache. Sometimes I vomited,” Saiphin recalled. “During my stay at hospital, I was very glad because doctors and nurses took close care of me.”

Malaria also in need of monitoring

Another concern among health officials is malaria, which thrives in conditions similar to dengue. “If we do not have specific measures in place to control [vector-borne] diseases, we will be at risk of possible outbreaks,” said Dr. Sibounhom.

The spread of malaria has been on the decline every year since 2015 and Laos aims to eradicate the virus by 2030. But the Ministry of Health is continuing to advise people living in remote areas where malaria is commonly found to sleep inside insecticide-treated mosquito nets to ward off the risk of infection.

Source: Centre for Malariology, Parasitology and Entomology. 2019 figures are only reported annually in November.

Although the number of malaria infections has declined in recent years, according to the Centre for Malariology, Parasitology and Entomology, deaths have increased because, according to Dr. Sibounhom, people in remote areas lack adequate information about prevention.

“Even though the number of malaria cases has decreased, preventive measures must be continued since Laos faces challenges in preventing malaria because of the difficulties local people have in accessing information,” Dr. Sibounhom said.

He has called for more equitable access to health services for poor and under-served communities in remote areas so they can receive the right diagnosis and be treated quickly.

Effective efforts to control malaria will also require the participation of affected communities and groups with the potential to spread the disease, such as forest-goers and migrant populations.

Mosquitos can contract the disease from biting an infected person. The infected mosquito then bites a noninfected person, starting the malaria transmission cycle.

The migrant population is a threat because those who have been bitten by a malaria-carrying mosquito but don’t immediately show symptoms of infection can spread the virus when they move from place to place. And if warming temperatures and other effects of climate change lead to an increase in migration, those risks could increase.

“The distribution of insecticide treated bed-nets and collaboration with the private sector has to continue,” said Dr. Sibounhom.

“If the weather continues to change as at the present, I think humans will continue to have a communicable threat of dengue, malaria and other [vector-borne] diseases in the remainder of this year and in coming years,” he added.

Reporting for this story was supported by Internews’ Earth Journalism Network’s Asia-Pacific project. This story appeared in www.vientianetimes.org.la on June 28, 2019.

Philippines
Appetite for Sustainable Alt-Meat Growing, but a Bigger Push Is Needed in the Philippines
© 2022 Earth Journalism Network All rights reserved.