This is part 2 of a series exploring people affected by dam projects along the Mekong who have joined hands to push for change.

Through disasters, a fellowship was struck. Ormboon Thipsuna remembers the date well, Aug 12, 2008, when a deluge of water from the Mekong swept through her hometown of Nong Khai and seven riparian northeastern provinces. Considering the rainfall was rather small and the Mekong’s gradual seasonal pace of fluctuations, many locals believed the sudden mega-flood, at times water levels went up as high as 13m, was caused by China’s dams upstream. Importantly, Ormboon got to know Niwat Roykaew, aka “Kru Tee”, founder of the Rak Chiang Khong group based in Chiang Rai province.

“Kru Tee made us aware of the dams’ impacts. Since then, we have done many campaigns together. I learned about his experiences in conservation movements. We formed the Thai Mekong People’s Network From Eight Provinces, and co-filed a lawsuit to challenge the Xayaburi dam project,” said Ormboon.

Twelve years later, Niwat spearheaded the launch of the Mekong People’s Forum For Thailand, which includes locals in Chiang Rai and seven northeastern provinces along the river. The calamity happening to the Mekong has united them. Now president of the Community Organisation Council Network Of 7 Northeastern Provinces In Mekong River Basin Association (ComNet Mekong), Ormboon attended the historic forum in December, which also included representatives from the US, Australia, Japan and the United Nations Environmental Programme (UNEP). China was invited but did not show up.

At the inaugural meeting, Niwat minced no words: “The biggest threat to the Mekong is dams. Climate change is but one factor contributing to the crisis. If we let the dam-building frenzy continue, the Mekong will definitely die.

Stark differences in worldviews underline the roots of the Mekong malaise, Niwat stressed. For people whose livelihoods depend on the river, the Mekong is the source of life and spirit, the cradle of cultures and civilisations, the ever-giving mother. In contrast, the bureaucrats and hydro-engineers eye her as “a tool to serve their desires, a massive amount of water from which to squeeze as much power as possible”.

After years of environmental campaigns in Chiang Rai, Niwat’s network has grown to cover different basins of the Mekong’s tributaries with some members managing to participate in provincial-level water resource management. One notable achievement is the Ing People’s Council, which supports the Boon Rueang community in safeguarding their wetland forest from a state-initiated industrialisation programme (see Part One). Niwat hopes something similar will eventually happen to the Mekong People’s Forum. For too long, Niwat notes, the decision-making process on running the almost 4,900km river has been predominated by a handful of interest groups.

“All these years the 60 million people along the Mekong have not been heard. The existing organisations represent state governments and corporations, each driven by different economic and political agendas. They are not real stakeholders who suffer from what’s happening to the Mekong,” Niwat said.

What exactly is the Mekong People’s Forum (MPF)? How can a grassroots group be recognised by local authorities, let alone at national and international levels?

Somkiat Prajamwong, secretary-general of the Office of the National Water Resources (ONWR), raised this very issue in an exclusive interview.

“The government is not slow in handling crises. I have been listening to several different groups. But in the international arena, dialogue must be between states only. Let me ask: would Laos have a people’s sector to engage in dialogue?

“When negotiating with foreign states, especially those more advanced and having control over water, we cannot force them. We must have enough evidence to present. The one who speaks must be credible and rely on science. This is the duty of the government, to come up with proofs,” said Somkiat.

Niwat accepts Somkiat’s cautions. But for him, the MPF is less a structure of authority than a vehicle for people’s voices. This is a movement, by and for the people, to seek inclusive and sustainable paths of development.

“What we say is the truth, based on evidence, with a holistic view. People are proposing their vision. So the ONWR and the Mekong River Commission must pay heed,” Niwat said.

Like the symbiotic and integrated relationships between the Mekong and its tributaries, the MPF builds on networks of people who have been working on a myriad of water-related issues — from fishing communities and farmers to engaged academics who have long studied the Mekong and tributaries, the civil society sector, and last but not least, the media. Niwat insisted the MPF is not a rigid air-tight structure but rather an organic, open space that allows members to mobilise actions based on individual needs, contexts and urgency of the issues they are facing.

The dynamic nature of the movement is necessary considering the complexity and transboundary flows of the riverine ecology. Thus in early March, while Niwat was preparing the groundwork with a multidisciplinary team of academics in Chiang Mai and later surveying the migrant bird populations in Chiang Khong, Ormboon’s ComNet Mekong staged a protest march in front of government offices in Bangkok, urging help for the fishing community suffering the impact of dams in Laos.

But all of them share a common vision. “We may use different methods, but our goal is to stop the dams in the Mekong,” said Ormboon.

Niwat believes knowledge is pivotal to obtaining bargaining power. The process of grassroots research, wherein locals collect information and analyse it themselves, will transform their own worldviews and attitudes. Contributions by academics from different fields and universities will strengthen and add credibility to this unique body of knowledge.

According to Niwat, the MPF plans to conduct research in individual river basins that are linked to the Mekong, from the Ing and Kok in the North to the Loei, Songkram and Chi-Mun Rivers in the Northeast, to name a few. The analysis and synthesis of problems will be collected and presented to relevant organisations, as “the Book of what the Mekong people really want”.

“It will be more powerful to speak as one voice than each of us speaking out separately,” said Niwat.

Among the grave concerns raised by academics who have collaborated with Niwat in grassroots research are the disruption of flood-and-flow patterns between the Mekong and its tributaries caused by the series of dams. Chainarong Setthachua of Mahasarakham University said the natural cycle of the Mekong’s seasonal floods into the wetland forests in the North and Northeast of Thailand is indispensable to the well-being and diversity of flora and fauna. The continuation of dam building will hasten the collapse of the whole ecological system, Chainarong warned.

Such alarming phenomenon has already been noticed in the wetland forests of the Ing Basin in Chiang Rai. The Muang Chum community, residing about 23km from the confluence of the Ing and Mekong, reported how a few of their cherished rare tree species started to wither and die from an onslaught of insects previously controlled by the seasonal influx of water from the Mekong. Pimpun Wongchaiya, a native of Boon Rueang community, observed a number of fish species that were easy to catch during her father’s times are a hard find nowadays. Ironically, locals near the Mekong and branch rivers must rely on farmed fish instead.

Amnat Trichak of Nakhon Phanom said the region was facing a severe decline in natural fish stocks, as the northeasterner struggles to raise fish in conservation zones.

“I am sad. In the past the Fisheries Department asked us to supply Mekong fish species for their research or breeding programmes. Now we have to beg for fish from them every year.”

Yet Thai authorities appear to continue building mega-projects as a priority. There are plans for even more dams at the confluences of the Mekong tributaries and diverting water to existing dams around the country. Chainarong said certain Thai state agencies have been at the forefront, vigorously promoting such plans.

“Those technocrats are only interested in volume and economic outputs from water, but not on the impacts on the ecology and people’s livelihoods,” he lamented.

Will Niwat’s MPF movement be able to stop the downward trends in time? Indeed, he foresees a need to groom younger generations to carry the torch. The founder of the Mekong School plans to launch a series of workshops and training programmes with youths from elementary to university levels.

The tech-savvy generations have the potential to push their parents’ grievances as well as to reach out to their peers in neighbouring countries. After all, people in Laos, Cambodia, and Vietnam suffer like Thais too, Niwat ruefully noted.

The volatile political climate in Southeast Asia, with growing tension between China and the United States, might contribute to the need for dialogue and the possibility of small people’s voices able to garner more attention from the powers-that-be, said Niwat. His great success in stopping China from blasting rapids and shoals near his hometown of Chiang Khong may offer inspiration. Through tireless, even dare-to-die campaigns and a well-documented study on negative impacts of the blasting on both the ecology and national security, in early 2020, the Thai government cancelled the “Lancang-Mekong Navigation Channel Improvement Project” long pushed by China.

“The world has changed. For years, I have submitted countless petitions to various embassies and government agencies. Initially I didn’t get an answer. But over the past couple of years China has been trying more to reach out to our group. They probably figure that staying quietly aloof would only put them at a strategic disadvantage. To push for development in the Mekong, you must talk with the people’s sector. If you don’t, others will.”

For Niwat, the Mekong People’s Forum is not about taking sides, but raising awareness of the environmental crisis that transcends national boundaries. The Mekong belongs to everybody and should be protected.

“The river also has rights, just like a human being,” Niwat stressed.

Pimpun would agree. The Chiang Rai native appreciates the value of the wetland forest, the Ing River and the Mekong, and in particular Niwat’s help that came at a critical time to save her community. “If and when Kru Tee needs us in his movement, we will be there.”

This story was produced with the support of the Earth Journalism Network and was originally published in the Bangkok Post and in the Mekong Eye on 21 April 2021. It has been lightly edited for length and clarity. 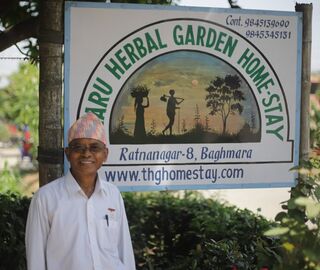