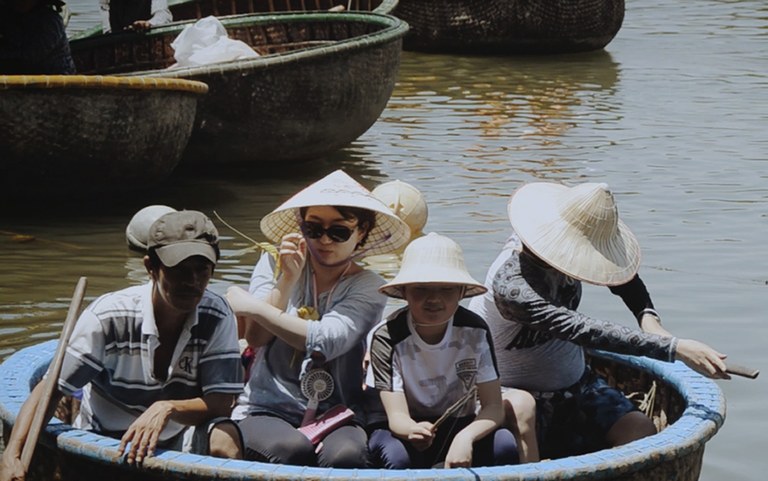 Visitors to Cam Thanh in round bottom boats operated by locals as part of their community-based tourism / Credit: HanoiTV.vn

Despite knowing the damage she was causing, Nguyen Thi Vang still walks through the coral reef in the Tam Hai sea to collect seaweed for her daily meals. “When I walk, I heard its broken sound and I feel painful,” said Nguyen. “Yet I need seaweed.”

When seaweed dies it floats on the water. But due to high demand locals pick the seaweed while it is still alive, walking over and often breaking parts of the coral reef. While the harvest season traditionally starts in May, Nguyen and other locals collect earlier. “People from other communes come and if we do not harvest they will collect it all,” said Nguyen.

According to a report by the Cham Island Marine Protected Area, since 2010 half of Tam Hai’s coral reef was overexploited due to the pressures of economic development, population growth and demand. The remaining 85% of the reef is considered to be endangered.

“In recent years, seaweed has decreased due to cold weather. The length of seaweed is shorter. There used to be 30-40 boat owners collecting seaweed and now there are about 10,” said Nguyen Thi Hoa, 58. “The income of my husband and I depend on the sea. We harvest anything that (we) can sell from the sea.” In the six-month harvest season, a household with two or three catchers can earn up to $1,200 USD.

Villagers know the importance of seaweed and its relationship with the coral reef and fish resources. “We understand its significance yet we need food everyday,” said Le Hoai Bong, a 62-year old fisherman. “It takes time for coral (to grow).” 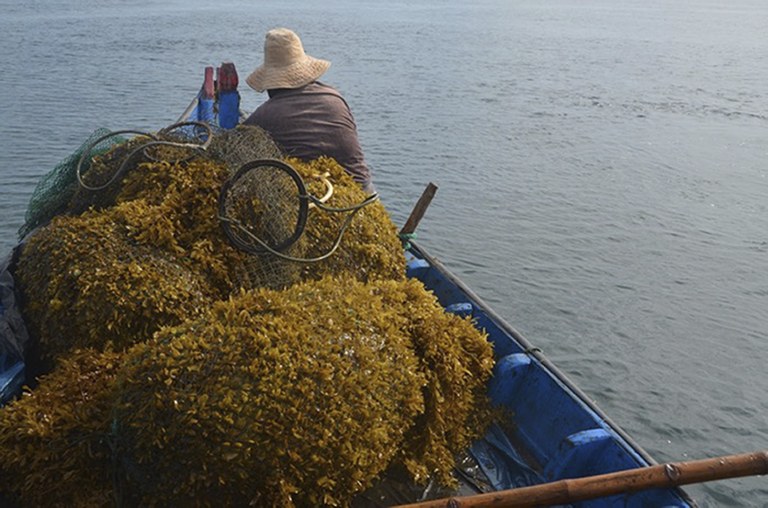 The importance of preserving biodiversity led villagers to take part in the community-based tourism and conservation project funded by The Global Environment Facility (GEF) Small Grants Program from 2010-2013. A community-based regulation of the area was approved to protect the coral and seaweed.

Community-based tourism is when local residents – often rural poor and economically marginalized – provide tours to help visitors understand their traditional life.  These services allow communities to benefit from their local resources. When visitors share accommodation and food with residents, it limits negative environmental impacts such as the construction of luxury hotels and reminds tourists about their responsibility to protect nature and preserve culture.

Unfortunately for Tam Hai there were only 700 visitors per year, mostly local tourists who did not bring enough money for residents to switch their livelihoods. “We have not developed tourism and it’s hard to maintain the supporting fee for these groups,” said Nguyen Tan Hung, the Vice President of Tam Hai People’s Committee.

At the time of the project’s implementation, the Quang Nam People’s Committee wanted to develop Tam Hai commune as a part of the Chu Lai Special Economic Zone.  While economic activities were made the top priority, marine biodiversity was not clearly written in the master plan. “Tam Hai planned to develop the fishing industry and the weak commitment of the local authority is the main reason why the project has not achieved its conservation goal,” said Dr. Chu Manh Trinh, an expert consulting on the GEF project.

Since then there have been changes in local policies and Tam Hai has been promoted as a new tourist destination with charming locations such as Ghenh Ban Than, Dua Island, and Mang Island. 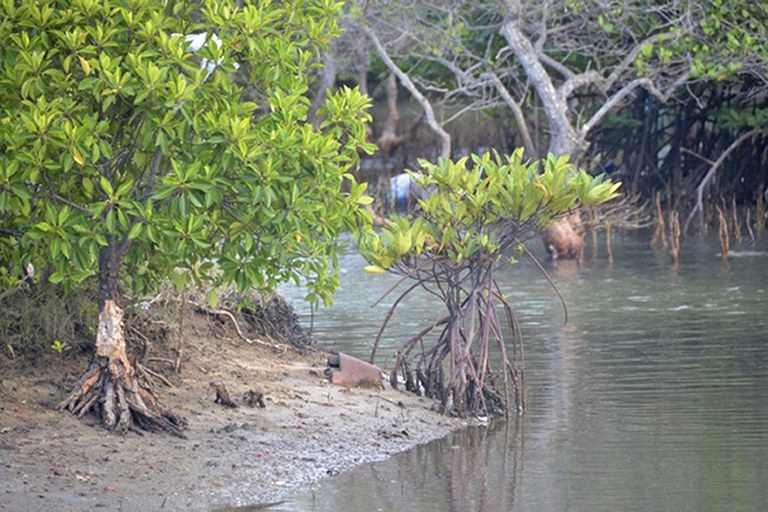 Chu supports community-based tourism but warned against the risk of companies managing visitor activities. “If they are employees, they lack pride of their work and lack of motivation to promote tourism,” said Chu. “People should be owners with their own experience and culture. It is the soul of community-based tourism. Companies should play the role of partners such as they do in Cam Thanh commune.”

This hope also reflects the aspiration of the local people. “I want to set up the protection area and I can receive a small allowance for my protection work,” said Nguyen Thi Vang. “When it is established, I will have a sustainable livelihood.”

The community-based tourism model in Cam Thanh was also established by the GEF Small Grants Program. From 2010 to 2013 this project successfully conserved Cam Thanh’s nipa palm forest through eco-tourism with cooperation among four players: community, companies, local authorities and experts.

“Companies provide tours. Experts assist (with) technical support. Local authorities provide policies to monitor and solve problems. Community plays a major role to conserve Cam Thanh’s nipa palm forest,” explained Chu. “Local people have experience and this is their property. They should be owners, not employees.” 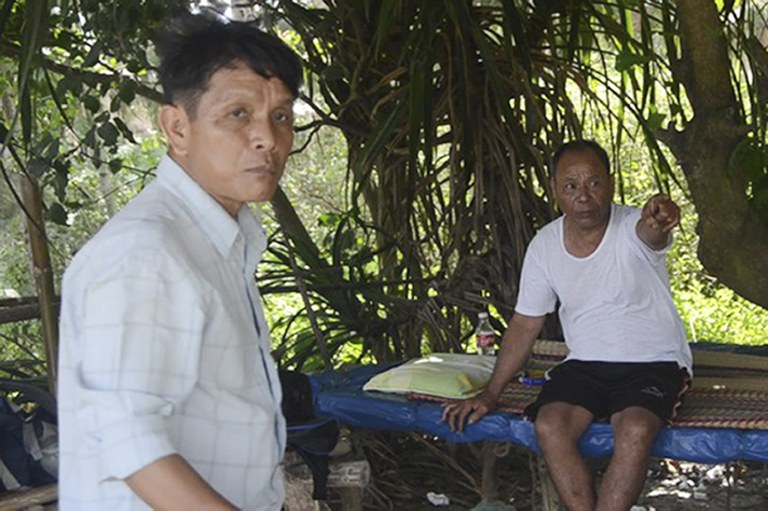 Cam Thanh provides community-based round boats for local and international tourists to enjoy the Bay Mau mangrove forests as well as observe daily life. “In recent years, the number of visitors has skyrocketed,” said Nguyen Hung Linh, a vice chairman of Cam Thanh People’s Committee who specializes in tourism management. “The tourism development brings job opportunities for local people to increase their income.”

“Half of this amount has been invested for infrastructure and the rest for tourism management, including a guard unit, a waste collecting group,” explained Nguyen, who said there are 450 households working in the tourism industry.

The area of Cam Thanh’s Bay Mau nipa palm forest expanded when locals recognized the importance of biodiversity to their livelihoods. According to Nha Trang Institute of Oceanography, within the buffer zone between Thu Bon River ecosystem and Cham Island, including Cam Thanh, there are now 506 fauna and flora species, including 67 fish species living in the river mouth and Cham Island coral reef.

From Loans to Livelihoods

Although Tran Thi Thang, a 46-year-old tourism boat coordinator, hesitates to tell her story about being out of poverty, she is proud that she and her sisters are not depending on a microfinance mechanism. Their financial independence was achieved through Cam Thanh’s community-based tourism.

“This year no one asked for loans from the support fund for women’s business after many members (paid back) their debts,” said Thang. “Three years ago our members had to wait for low-interest loans.”

Ten years ago, stable income was just a dream for Thang. In 2009, as one of the poorest families in the community, she received a state subsidy to build the family home. After trying everything – from cutting grass for cows, collecting rubbish, fishing – they did not have enough to raise three kids. “We requested our kids to drop school for work,” she said. “(But) the local authority lent us school fees.”

Thanks to the increase in local and international tourists in Cam Thanh her family has new income streams from boat tours and cooking classes, helping them repay debts. “After graduating a tourism college, my eldest daughter started her own business and brought tourists to us. My second daughter who is studying tourism organized cooking classes,” she explained. “My husband did not go fishing anymore because he sails the boat for tourists.” 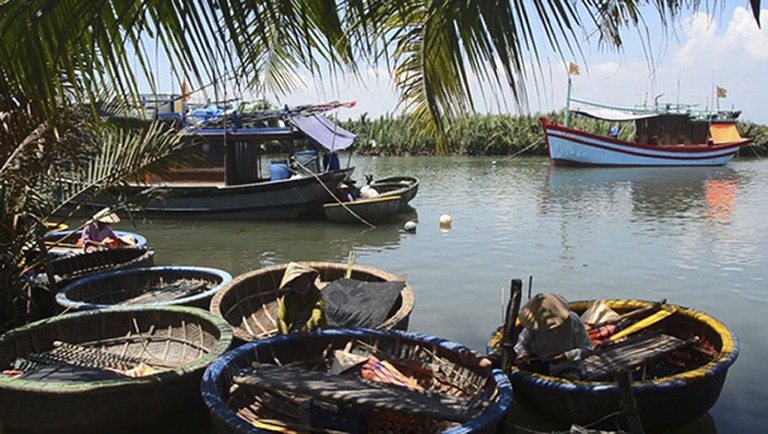 Over 450 households in Cam Thanh commune provide round boat tours and other services for visitors / Credit: Tran Thuy Binh/HanoiTV.vn

As the number of visitors increased Thang became a coordinator to manage round boat tours and cooking classes with members of the community.

“Four years ago, we set up a women-based support group to get out of poverty. Last year, this group was dismantled when members had sufficient (livelihoods) due to their participation in different links of the community-based tourism chain,” said Pham Thi Ly, a 56-year-old widower involved in the round boat tour groups.

In the past they had limited options yielding low income. “We had to harvest shrimps and other seafood until 10 PM. Everyone caught fish, shrimps and snails despite of their size. Because of the overfishing we only earned one dollar per day,” said Ly. “Now I can earn $13-15 USD per day from sailing. I feel happy with (my) current life because I can chat with friends after 6PM.” 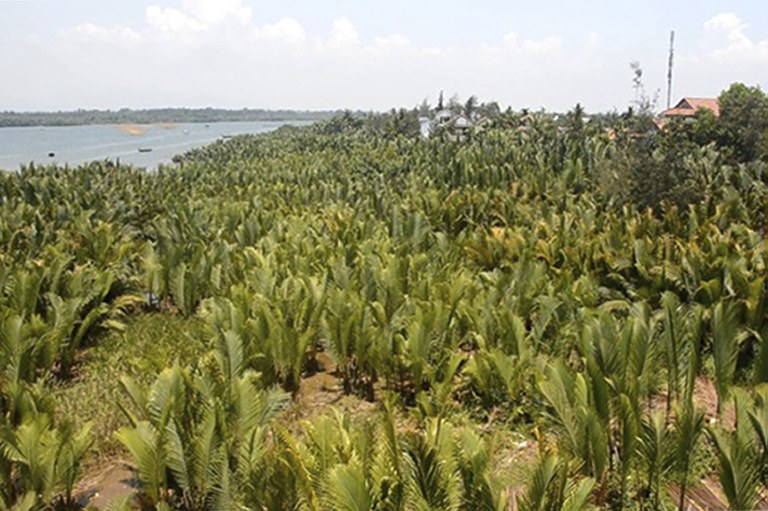 As Cam Thanh’s community-based tourism model is considered a case study for other communes in Vietnam, the Hoi An People’s Committee is discussing options for better resource management.

Until now officials do not know how many tourists in Cam Thanh should be served per day. As the number of daily visitors has risen to 1,700, increased food, water consumption and waste is causing concern. Some households have even cleared their mangrove trees to make fish ponds to serve food demand of tourists.

“Natural resources (in Cam Thanh) are seriously exploited and its products are incoherent, not creating a value chain. The use of nipa mangrove forests, seafood, land and water have not been clearly designed and not integrated in the strategies of Cam Thanh and other sectors of Hoi An,” said Le Ngoc Thao, the vice director of Cham Island Marine Protected Area. “Tourism developed very quickly but it is not sustainable.”

Pham and other scientists question the real practice of eco-tourism when locals use mangrove leaves to make souvenirs, catching fish for performance, or playing loud music to serve tourists. “There is an open karaoke stage when locals try all their best to get the highest tip. Their souvenirs are not essential when they make the environment vulnerable. Fishing is not to conserve,” said Chu. “There is a growing rate of construction and waste.”

Leaders of Hoi An city and Cam Thanh commune have shared their thoughts with Chu and prefer a stable number of foreign tourists and less environmental impact. They agree that the community-based tourism development model is the right way but are worried if there is a shift in current foreign tourist visits –– currently from China and South Korea – in a few years.

“We would like to attract more travelers from the continent,” said Vo Hung Son, the Vice President of Hoi An People’s Committee. “We are developing different promotion programs to attract tourists from new markets such as Japan, Malaysia and Thailand.”

This story was produced under the EJN Asia-Pacific Story Grants 2018 with the support of Sweden/SIDA. A version of this story about Tam Hai and Cam Thanh communes was published on HanoiTV.vn 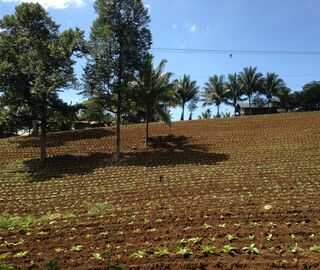