Controversy over how brick kilns clean up their act

Controversy over how brick kilns clean up their act

Official attempts to propose a particular technology for brick kilns, which are the third-biggest industrial consumer of coal in the country, are being questioned by experts, who say the government’s aim should be confined to reducing emissions.

“The government, instead of recommending a particular technology, should focus on lowering the overall energy consumption (specific energy consumption or SEC, the amount of fuel required to produce a unit of material) and pollution abatement,” Vishal Aggarwal, an energy and environment specialist at state-run Bureau of Energy Efficiency, told indiaclimatedialogue.net. “The choice of technology should be left to brick manufacturers to achieve this objective.”

“The government, to address the issues related to increasing operation cost and air emissions, has proposed that brick manufacturers switch to induced draft brick kilns in which the required combustion air is provided and controlled through a fan,” Aggarwal said. “Since brick manufacturing is a continuous process, the manufacturer will be required to install a diesel generator set, and therefore, will have to bear additional operational cost.” This is particularly true of the National Capital Region, where power supply is erratic. The three districts in western Uttar Pradesh that have received the pollution control authority’s directive are part of this region. 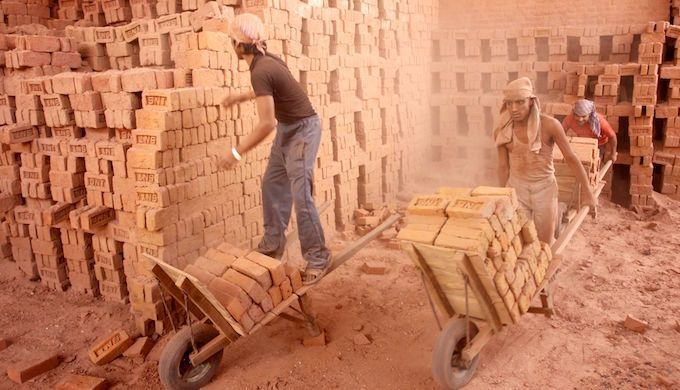 India is the second-largest brick producer in the world, producing 200 billion bricks every year that comprises 13% of global production. The sector consumes around 35-40 million tonnes of coal per year. Despite its gargantuan size, the brick kiln sector of India remains largely unorganized, according to Delhi-based Centre for Science and Environment, an advocacy group. The brick industry is considered the industry of the poor, employing around 10 million people directly and indirectly.

There are around 125,000 kilns in the country, according to the Punjab State Council for Science and Technology. There about 90,000 energy-inefficient clamps — temporary constructions made of green bricks or clinker, the stony residue from burnt coal or from a furnace. The clinker can be reused while the green bricks are sold. There are 33,000 fixed-chimney Bull Trench Kilns (BTK) and around 2,000 High Draft, Down Draft and Zigzag kilns. 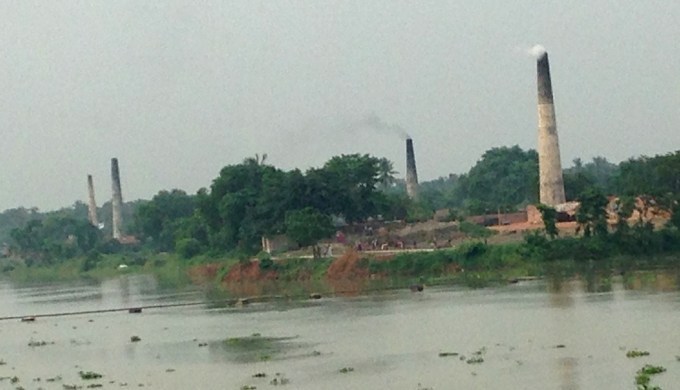 Highly polluting brick kilns on the bank of the Ganga, near Bandel in West Bengal (Photo by Joydeep Gupta)

“In India, the prevailing technology used for making bricks is the BTK. In this technology, the air required for combustion is provided naturally due to draft created by difference in weight between hot gases inside chimney and outside air therefore called natural draft kilns,” Aggarwal explained.

“The commonly-found red bricks used for construction are made by firing dried bricks into kilns at temperatures up to around 1000⁰ C,” according to a CSE document on the scope for a National Brick Mission that was published this year. “Air flow is important as it is responsible for the distribution of heat inside the kilns. In natural draft brick kilns, this is achieved by a chimney whereas in induced draft brick kilns, it is done by a fan.”

Experts say the draft notification for the brick sector needs to be more pragmatic since there are so many kilns that use the BTK method and also because these cannot be easily monitored. “There are other technical options which are being practised in similar countries,” Aggarwal said.

Fuel expenses make up about half the total cost of making a brick. The sector is the largest user of coal after thermal power plants and the iron and steel industry. Apart from coal, biomass, agricultural waste, heavy fuel oil, wood and even old tyres are used as fuel.

In its National Brick Mission document, CSE points out that burning coal releases greenhouse gases (GHGs) including black carbon, plus oxides of sulphur and particulate matter. In particular, use of coal with high sulphur content or petroleum coke leads to noxious emissions of oxides of sulphur. High ash, low quality coal produces more black carbon and particulate matter. Burning of other poor quality fuels leads to the release of contaminants and high concentration of various pollutants.

Regulatory bodies cannot monitor emission standards for small-scale units because of their sheer number, CSE says. The best option is to adopt technology-based standards. The standard in the country is 750 µg/Nm3 (micrograms per normal metre cubed per hour, the unit used to measure gas flow rate) for BTKs. The mission should lay out a roadmap for emission reduction from 2016 to 2030, it suggested. Particulate emissions should be less than 250 µg/Nm3 for zigzag kilns and less than 100 µg/Nm3 for cleaner technology.

A 2012 document titled Reducing Black Carbon Emissions in South Asia by the US Environmental Protection Agency (EPA) has a section devoted to the brick industry. “Brick production has negative climate impacts due to CO2 (carbon dioxide) and black carbon emissions,” it states. It reports that in India, the industrial sector accounts for approximately 15% of all black carbon emissions, with approximately two-thirds of those emissions, or 9%, attributable to brick kilns.

It also cites how BTKs are inefficient and polluting. “Nevertheless, this kiln is commonly used because of its high profit margins combined with low initial investment requirements. To date, the brick industry has been an overlooked sector for black carbon mitigation, leaving room for significant action.”

The EPA believes that a cost-effective way to reduce carbon emissions is to improve operating practices and increase combustion efficiency by working with both kiln owners and workers, particularly the firemen who control the brick-firing process. They are likely to be motivated by seeing the potential fuel and cost savings that can be achieved by improved combustion. Firemen, other kiln workers, and local residents would also benefit from improved air quality. Trade associations such the All India Brick and Tile Manufacturers Federation can provide information on how to achieve this.

Adopting best practices in BTKs could result in energy savings of about 1 million tonnes of oil equivalent (mtoe) per year in India, according to the EPA. This is the equivalent of roughly 1.1 billion litres of crude oil, enough to produce more than 541 million litres of petrol. Switching from conventional solid bricks to resource-efficient perforated and hollow bricks could save energy of about 0.6 mtoe per year, if a third of BTKs switch to these. If a tenth of bricks are made with fly ash – the waste from thermal power plants – it could save about 0.3 mtoe per year across the country.

As a success story, it mentions how Bharat Bricks Co. near Chandigarh started producing perforated bricks on a small scale in 2005. In 2009, it replaced its fixed chimney kiln with a more energy-efficient, high-draft kiln, with technical support from experts. “The owner received the National Gold Star Award from the Indian Society for Industry & Intellectual Development for outstanding performance in innovation in the clay processing industry,” the EPA says. “Based on this success, Bharat is looking to make further upgrades to produce resource-efficient bricks, including hollow blocks, on a large scale.”

O. P. Badlani, who owns Prayag Clay Products in Varanasi district of Uttar Pradesh, has also switched to zigzag kilns, which has helped improve profits. He has successfully adopted technologies like biomass gasification for power generation. Badlani has played a pioneering role in the development of natural draught zigzag technology and has provided this knowhow to several brick makers on a turnkey basis. He has paid back to the industry by a unique initiative called NeBriTA (Next Gen Brick Training Academy) at Varanasi, which provides vocational and technical training to the brick industry.

“I have depicted below how much a kiln owner can reduce coal consumption, improve quality of bricks and earn more money by adopting the natural draught zigzag technology,” he told indiaclimatedialogue.net. “The comparison done is on an annual production of 40 lakh (4 million) bricks by a BTK versus Zigzag kiln.” 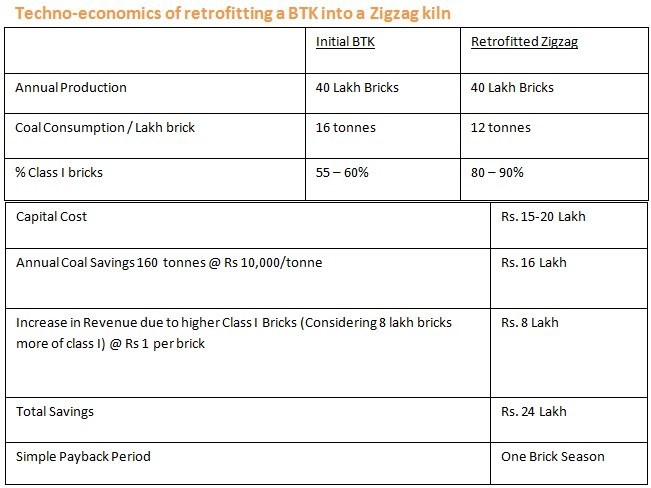 The National Brick Mission aims to transform the Indian brick sector by facilitating large-scale adoption of technologies for cleaner fired brick production, finding alternatives to fired clay brick. It hopes to roughly halve GHG emissions as well as fuel and clay consumption. As much as 600 million tonnes a year of clay is used every year for bricks, which damages topsoil, especially at riverbanks.

The key elements of the strategy include moving away from solid clay fired bricks in the market to hollow clay fired and fly ash products. The mission, which is expected to cost INR 70 billion (USD 1.04 billion), will be set up at both national and state levels. It will be an autonomous body under the ministries of urban development and housing, and urban poverty alleviation. The implementation period is 15 years.