The United Nations-backed climate change conference or COP26  kicked off on Oct 31 with the attendance and, in some cases, notable absences of world leaders. A flurry of huge climate-related commitments was also made by governments and companies.

When these pledges were announced on Nov 2, Malaysia was not one of the signatories. Additionally, no ministerial-level representative was present at the COP26 World Leaders Summit, which occurred in the first two days of the conference.

But this doesn’t mean that Malaysia doesn’t have a presence at COP26, said Ministry of Environment and Water (KASA) secretary general Datuk Seri Dr Zaini Ujang, who is leading the Malaysian delegation. The Edge Malaysia had a brief interview with him at COP26.

On Nov 5, it was announced that KASA minister Datuk Seri Tuan Ibrahim Tuan Man will be representing Malaysia at the high-level segment on Nov 8 and 9, when countries present their national statements.

KASA also stated that Malaysia will join both of the pledges mentioned above. When asked, Zaini said the minister’s participation was not a last-minute decision.

“It was planned. We had to get agreement from the prime minister. This is the budget [period] and there are debates in the Parliament at the moment. We hoped that prior to the [minister coming to COP26], the budget for the ministry would be approved. I hope all members of parliament take this opportunity to depoliticise climate change issues,” said Zaini.

As to why Malaysia was later than others in joining the pledges, Zaini said it needed approval from the Cabinet.

“There are some countries that made a pre-announcement [to sign the pledge,] and when they came back to the country, they had problems. We don’t want that to happen. [It’s] not [for] a person of my stature to make that announcement. It should be made by the prime minister or minister to represent the country,” he said.

According to KASA’s press statement, the pledge to halt deforestation is aligned with Malaysia’s commitment to maintain at least 50% of its land area under forest and tree cover. This was affirmed in the Malaysian Forestry Policy 2020 launched in March this year. Meanwhile, methane emissions contributed to 17% of greenhouse gas emissions in Malaysia in 2016. The major source of methane in Malaysia is fugitive emissions from the oil and gas industries, according to Malaysia’s third biennial update report to the United Nations.

A quick look on the COP26 platform showed that the registered Malaysian attendees include officers from various government ministries, the group CEO and chief sustainability officer of Petronas, chief executive and director of the Iskandar Regional Development Authority and researchers from University Teknologi Malaysia, amongst others. Of course, the registration does not mean that the attendees are actually present at COP26.

“We are not here for fun. People think so because we have no exhibition here. Our team is busy with negotiations and [stating] our positions. For instance, we received a draft at 6:45am today that is to be discussed at 11:45am. This afternoon, another draft will be issued. All this is just to reach [agreement] on one small article. It’s not easy,” said Zaini.

The Malaysian delegation will focus on a few issues during COP26. One is the negotiations around the common timeframe for the National Determined Contributions (NDC), which are the country’s climate targets, to be completed.

Some want a shorter five-year time frame so countries are pushed to respond to scientific and technological developments quicker and strengthen their climate targets. Others are pushing for 10 years or longer as it can align with their national plans. Malaysia is proposing to do it in five years, said Zaini.

There is a lot of contention in this area as negotiators want to ensure that in general, carbon credits are not used as a way for countries to buy their way out of actually cutting emissions. Additionally, many disagree on whether old carbon credits from the Kyoto Protocol, the predecessor to the Paris Agreement, should still be considered.

Malaysia has announced plans to introduce a voluntary carbon market and domestic emissions trading scheme. It also participated in the carbon market scheme under the Kyoto Protocol. When asked what Malaysia’s stance on the current negotiations is, Zaini said: “We cannot tell you now as we are still negotiating.”

Climate finance is another area that the delegates will focus on, in hopes of pushing developed countries to provide their share of financing. Lastly, the transparency over how countries report their climate targets and emissions is still unsettled.

“We try not just to highlight our positions but to also work with other governments, agencies and international institutions on how to move forward,” said Zaini.

Malaysia announced its updated NDC earlier this year, committing to reduce its economy-wide carbon intensity (against GDP) by 45% by 2030, compared to 2005 levels. This is a step up from the previous target, which promised a 35% reduction upon receiving technology transfer, capacity building and financing from developed countries.

Does this mean that Malaysia is confident it can reach the more ambitious goal without help from developed countries? Not necessarily, Zaini admitted.

“We’re not saying that if there is no money, we don’t do it. We are saying that we are doing it and please give us financing.”

In the first few days of COP26, countries like Norway, Japan, Australia, Switzerland, the US, the UK and Canada made new commitments to increase financing to support developing countries in dealing with the impact of climate change.

Over 40 countries, including Indonesia, Vietnam and Poland, also agreed to phase out coal power plants by 2030 or 2040. Major financial institutions like HSBC and Fidelity International committed to end funding of unabated coal. Malaysia already stated that it will not build new coal power plants earlier this year.

On the other hand, the Asian Development Bank launched an Energy Transition Mechanism to use blended finance and accelerate the retirement of coal power plants, in collaboration with the governments of Indonesia and the Philippines.

This story was originally published at The Edge Malaysia on November 8, 2021. It was produced as part of the 2021 Climate Change Media Partnership, a journalism fellowship organized by Internews' Earth Journalism Network and the Stanley Center for Peace and Security. 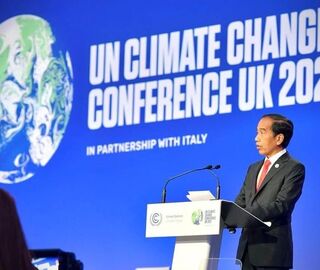